Accurate but not always compelling sports biography gets a draw. 3 Stars

A seemingly accurate if not always compelling portrait of never-say-die fighter Vinny Pazienza, Ben Younger’s Bleed for This brings yet another real-life boxer’s life to the big screen.

Unless a movie features a fictional boxer by the name of Rocky Balboa, the American public doesn’t seem much interested in fight films any more especially those about real-life pugilists. For the past twenty years, notable boxing biographies such as The Hurricane, Ali, Cinderella Man, The Fighter, and most recently Hands of Stone have told stories of dedicated ring warriors with only moderate commercial results (or worse). Now, Ben Younger’s Bleed for This can be added to the list. It’s more a family drama than a fight film, actually, and much closer to, say, David O Russell ‘s The Fighter (about the colorful Micky Ward and his eccentric family) than any Rocky movie or any of the great fight films of the 1940s and 1950s. With its boxing scenes only marginally entertaining, the burden of its entertainment value must come from its family dynamics and the focus on one of the great comeback stories of the sport.

After losing three fights in a row including a title shot against reigning super lightweight champion Roger Mayweather (Peter Quillin), Vinny Pazienza (Miles Teller) decides he needs a change in training and seeks out celebrated but cantankerous trainer Kevin Rooney (Aaron Eckhart). Kevin quickly realizes that Vinny’s power is being sapped by fighting in a weight class lighter than it need be, so he decides to jump Vinny two weight divisions and begins training him at junior middleweight, something rather unheard in the boxing world. And yet, in his first fight against world champion Gilbert Dele (Jean Pierre Augustin), his power and speed ends the fight quickly as he adds another world title to his resume. He’s unable to enjoy it for long, however, when he’s involved in a near-fatal car crash breaking his neck and making any further career in the sport unthinkable. But the doctors, Vinny’s parents (Katey Sagal, Ciarán Hinds), and his promotors Lou (Ted Levine) and Dan (Jordan Gelber) Duva don’t reckon on Vinny’s indomitable spirit and unshakable resolve that he’s not finished with the sport.

Writer-director Ben Younger gives us a balanced portrait of Vinny Pazienza: his devil-may-care approach to training (staying up late and gambling in the casino the night before the title shot that opens the picture), his devotion to his parents and siblings, his addiction to casinos and strip clubs, and his genuine love for his sport and his close bonding with his trainer who sees him through both good times and bad and once convinced Vinny has it within him to come back from his accident, commits to getting him ring ready once again. Fight fans may be disappointed in only three matches being portrayed in the movie (Vinny’s wild ring career alone could have furnished scenarios for several more movies) and none of them offering the same kind of visceral thrill that the fight scenes in Raging Bull offered (they’re too heavily edited into montages of head shots to build any kind of real momentum). But the central core of the movie involves the post-accident Vinny wearing a halo brace and attempting to reestablish some kind of a normal life during the half a year he was confined to the cumbersome contraption. We celebrate right along with Vinny with his small advances in his (and later Kevin’s) secretive training sessions in the family basement eventually captured in an effective montage by director Younger. And Vinny’s immediate family who all live together: devout mother Louise, temperamental father Angelo, brash sister Doreen (Amanda Clayton) and her endearing husband Jon (Daniel Sauli) who collects elephant figurines may not match up on the eccentricity scale to the Wards in The Fighter, but they’re still a colorful and interesting lot.

Miles Teller makes a most convincing Vinny Pazienza gradually gaining weight and musculature as the character skips through several different weight divisions in his career (the climactic fight against Roberto Duran is for the super middleweight title) and doing an expert job in showing us Vinny’s gritty determination and tough perspective as both an athlete and as a man. Aaron Eckhart is equally forceful and charismatic as Kevin Rooney. Burying his good looks behind a receding hairline and a decided paunch, Eckhart gives one of his career-best performances as the steadfast trainer and friend. Ciarán Hinds adds bluster amid loving concern as Vinny’s dad, and Katey Sagal has some nice moments as Vinny’s mother who can’t bring herself to watch her boy get hurt in the ring and spends his fights praying for his safety in an alcove filled with Catholic symbols and burning candles. The Duvas in the hands of Ted Levine and Jordan Gelber come off looking very bad in the movie: mercenary, unsupportive, and exploitive. While Peter Quillin makes an acceptable Roger Mayweather, the casting director has chosen badly for the film’s Roberto Duran who at the time of his first fight with Vinny was older (44) and stockier than Edwin Rodriguez who portrays him here.

The film’s theatrical aspect ratio of 2.40:1 is accurately rendered in this 1080p transfer using the AVC codec. Sharpness is consistently superb throughout the presentation (you might wish it wasn’t so outstanding during the sequence when screws are being removed from Vinny’s skull halo one at a time), and color is rich and nicely managed as well (all the reds in the movie are quite vibrant but don’t bloom). Contrast is dependably applied for a first-rate picture, and black levels are outstanding. The movie has been divided into 20 chapters.

The DTS-HD Master Audio 5.1 sound mix does a fine job with the narrative though the car crash, the turning point in the story, gets a muffled, underwhelming aural treatment here. One unusual and effective moment during a fight tunes out the howling crowd so that we only hear punches and footwork on the track (though director Younger only uses the motif once). Elsewhere, the fight crowds provide most of the surround ambiance in the sound mix with occasional contributions also from Julia Holter’s background score. Dialogue has been placed in the center channel.

Deleted Scenes (11:57, HD): seven scenes may be watched individually or in montage.

A seemingly accurate if not always compelling portrait of never-say-die fighter Vinny Pazienza, Ben Younger’s Bleed for This brings yet another real-life boxer’s life to the big screen. With excellent performances and a fine production, the movie is certainly worth a rental especially with the outstanding picture and sound quality in its corner. 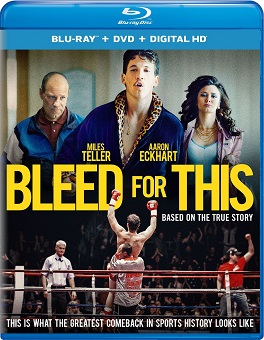