Forum List What's new Dark Style Change width
Log in Register
What's new Search
Menu
Log in
Register
Navigation
Install the app
More options
Dark Style
Close Menu
Posted on December 9, 2020 by Sam Posten
You are using an out of date browser. It may not display this or other websites correctly.
You should upgrade or use an alternative browser.
I'll tell you what we are sister, we're the top of the fucking food chain. - Recommended 4.5 Stars

Born to a mother dying from wounds she received from the fangs of a vampire, Blade (Wesley Snipes) is a one man vampire destruction crew. He has inherited both the superhuman strength of a vampire and the human ability to walk without fear during the day. The catch is he must constantly receive a serum that keeps the vampirism from taking over completely. Fortunately he has teamed up with Whistler (Kris Kristofferson) who has limited hematological skills that have so far kept Blade alive, but are reaching their limits.

In this world Vampires have established a shadow society and a dozen clans with their own history, powers and cultures. For all their wealth tho they remain at the edge of society and constantly fear being identified by the humans. That is until Deacon Frost (Stephen Dorff) makes a power play to unite the clans and use an evil ancient power known as La Magra to tip the balance so that humans will be subservient to Vampires need to feed.

When Blade starts disrupting Frost’s gang activities it becomes only a matter of time until the two face off against one another. 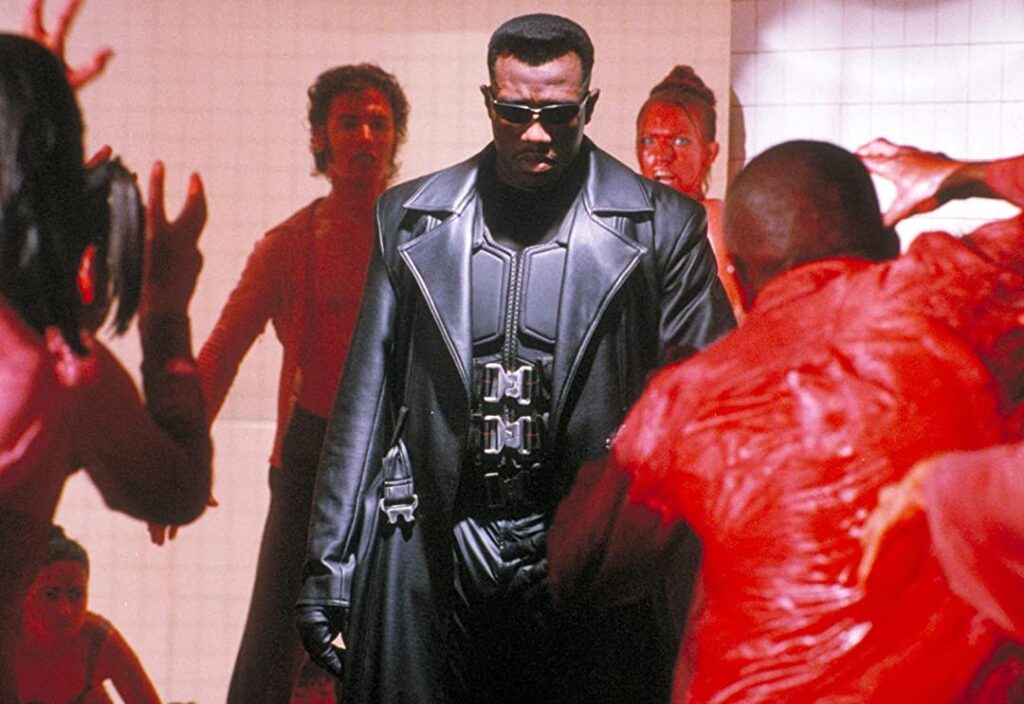 Blade remains as badass as ever and looks and sounds significantly better than any version I have seen before. Snipes was the perfect choice to take this iconic comic character to the big screen, and it became a franchise vehicle for his stardom and wealth, spawning sequels, comics, video games and more. The CGI heavy finale shows its age a little bit but that’s forgivable. The best part of Blade’s success can’t even be found within its own frames: It was simply proof that smart super hero flicks that took themselves seriously and shed the camp/kitch wink and a nod that had been underlying even the best of them so far could work. Dorff’s smarmy/sexy villain balances well with the insane idea of summoning elder gods to aid the vampires in their quest to rule the humans. And Kristofferson was an inspired choice to play burnt out Whistler, bringing a human side to tell Blade’s history to his love interest and the audience as well. 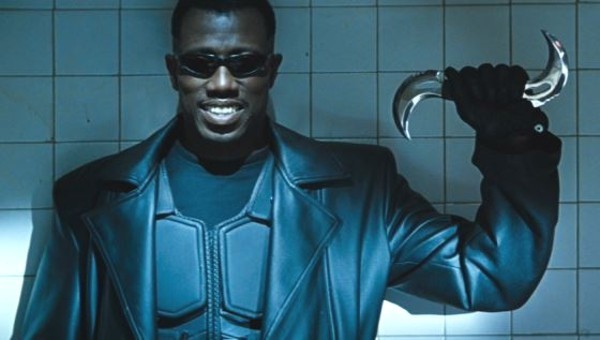 Much has been made across the net about Blade’s use of DNR to smooth over some of the detail, but it was not an issue for me. The deep blacks present in the film contrast nicely with bright flashes of neon, blade edges, teeth and and other popping elements looked excellent throughout, especially compared to Total Recall which I reviewed last week. Skin tone was decent if not perfect, with detail enough to see pores in many scenes, and if that is hampered by DNR at all it’s negligible. The detail baked in to the 1998 vintage CGI obviously doesn’t scale well into 4k but I was still impressed by the Harryhousen-esque skeletal spirit explosions if not the blood jello demon itself =) 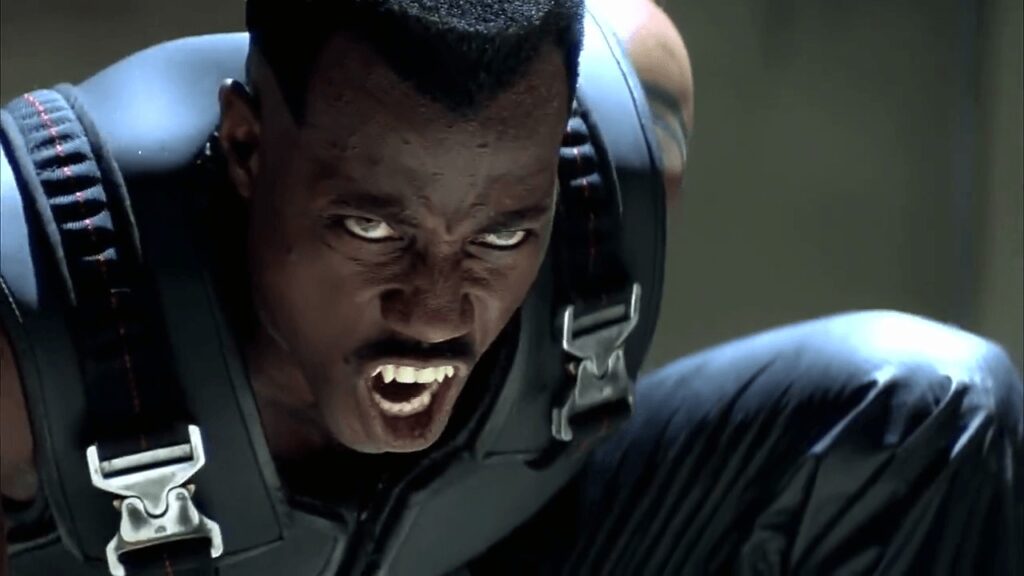 I’ll make it easy: The Atmos track here is simply reference quality for a 2000 era film. Gunshots are weighty and move throughout the listening dome with ferocity. Sword and gadget swoops and swishes also are handled with deftness, as are the cloth flaps and other environmental effects indicating undead presence across the 3 dimensional sound stage. I’m told this is a mild upgrade from the recent Bluray which set a huge target for being so good, but this UHD Atmos track even beats that.

The “Bloodbath” scene became the most memorable part when I saw Blade theatrically and this disk tremendously outdoes that memory. Club music pounding, screams of ecstasy and then sobbing give way to explosives that render the undead into mere particles. It simply doesn’t get better than that for those of us who are fans of action and the simple joy of seeing stuff blow up good. Not every film has to have a deeper meaning and Blade exuded enough cool to make fans out of critics like Ebert back in the day.

Nothing new here but the retreads are all pretty informative!
Audio commentary on both disks, presented as clips rather than one long talk

On the Bluray:
La Magra
Designing Blade
The Origins of Blade: a look at Dark Comics 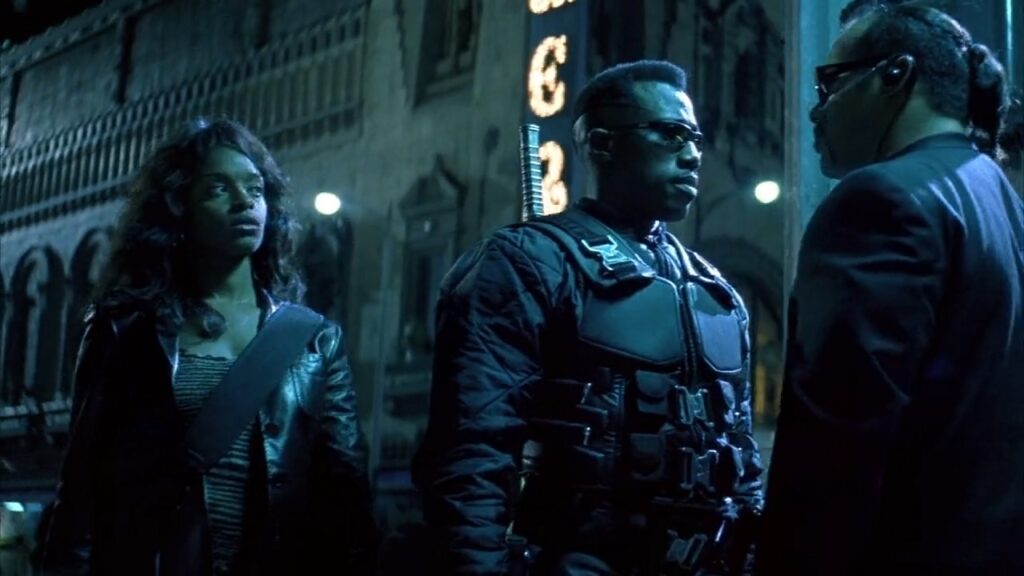 80s and 90s nostalgia are big right now and getting a pristine copy of Blade with 2020 tech specs hits that right in the sweet spot. A fan favorite film with supreme detail and a kick ass Atmos track? Yes, please. A few new extras wouldn’t have hurt, but what would they dig into, Snipes latest tax evasion charges?

Ultimately you know what you are getting with Blade: A dark tale of vigilantism against the undead told and shown with extreme panache. 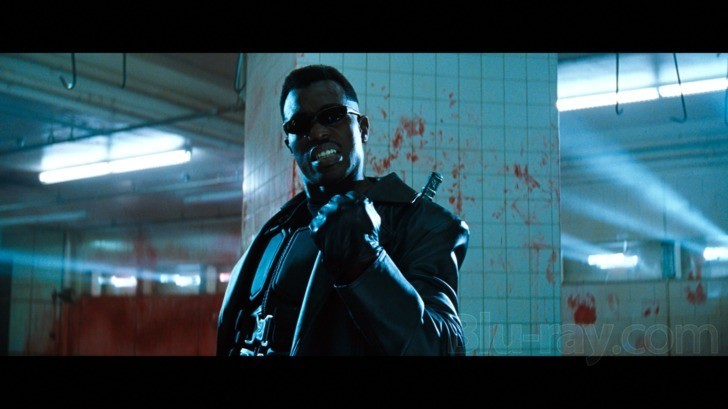 But how does Traci look in 4K?

Thanks for the review, Sam!

Carlo Medina said:
But how does Traci look in 4K?
Click to expand...

Thanks for the review Sam. Can not wait to watch Blade as I have not seen it in some time. Wonder when the other two Blades will make it to 4K Blu-ray? Is the photo visible as I posted photos else where today and for some reason they can not be seen by others? Dave Moritz said:
Thanks for the review Sam. Can not wait to watch Blade as I have not seen it in some time. Wonder when the other two Blades will make it to 4K Blu-ray? Is the photo visible as I posted photos else where today and for some reason they can not be seen by others?

I can see the picture. I have both movies in 4K, too
You must log in or register to reply here. 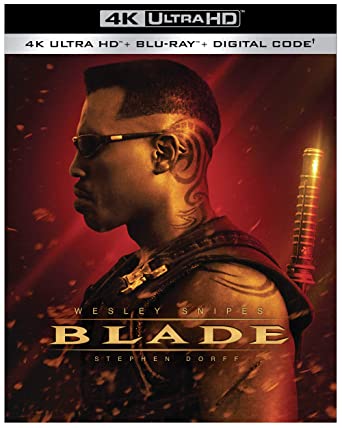