The long-awaited sequel Blade Runner 2049 arrives on 4K UHD Blu-ray in a stunning transfer featuring an immersive audio-visual experience and furthering the epic story of the replicants.

Director Denis Villeneuve was given the almost impossible task of directing a sequel to one of the most influential science fiction films of all time, Blade Runner. Trying to write a spoiler-free review of Blade Runner 2049 is almost as impossible. Set thirty years after the first film, most Blade Runners are now replicants. The Tyrell Coporation, the inventors of replicant technology, has gone bankrupt. Niander Wallace (Jared Leto) has acquired the remnants of Tyrell and folded them into his own company, The Wallace Corporation, which also aided in saving the planet from starvation and has upgraded replicants to a level where they are even more human then ever, giving them open-ended lifespans and more realistic memory implants. K (Ryan Gosling), a Blade Runner and latest generation Nexus-9 replicant, has tracked down a rogue Nexus-8 model, Sapper (Dave Bautista), slated for retirement. While searching Sapper’s farm after his retirement, a chest is discovered buried next to a tree that contains the remains of a Nexus-7 that may or may not have died while in labor. K’s boss, Lt. Joshi (Robin Wright), knows this could be a game-changer, and orders K to track down and retire the child. This leads him to The Wallace Corp. headquarters, where he meets Wallace’s assistant, a Nexus-9 model known as Luv (Sylvia Hoeks). But not everything is as it seems, as Luv is also tasked by Wallace to find that child, not for retirement, but for procreation so Wallace can “manufacture” his replicants at a much faster rate. K’s investigation leads him to finding Deckard (Harrison Ford), and a revelation that K may or may not be ready for.

Like Ridley Scott’s 1982 film, Blade Runner 2049 has some eye-popping visuals and a production design that are original while also paying homage to the first film, allowing fans to easily step into this world that has further devolved as the wealthy continue to flee a dying planet, leaving the poor and a slave labor force behind. Ryan Gosling is perfectly cast as K, who is not very talkative but the viewer can sense what is going on just with a brief facial expression or eye movement, yet one can sense a wonderment and innocence underneath. Ana de Armas is also excellent as K’s AI companion, Joi, a product of The Wallace Corp, whom K has fallen in love with. These two know they are not human but find humanity in each other. Robin Wright is hard-as-nails as K’s Lieutenant, while Sylvia Hoeks portrays Luv with a sense of faithfulness and duty to Wallace as a young, untamed child. Denis Villeneuve, with this film and last year’s Awaken, has placed himself at the top of the list of noted science fiction directors working today.

Blade Runner 2049 was captured at 3.4K resolution on Arri Alexa Mini and XT Studio cameras and completed as a 4K digital intermediate. Warner’s 2160p presentation with HDR10 color grading may have set a new standard as to how good this new format can look. The movie takes full advantage of the higher resolution image, not only showing every wrinkle of age in Harrison Ford’s face, but also every subtle facial expression by many of the film’s characters. Color plays an important storytelling aspect of Blade Runner 2049 by bathing its image in various hues based on the locale of each scene, and the wider gamut that both UHD and HDR10 allow make the movie all the more visual and breathtaking. Contrast is also excellent, with deep blacks that retain fine shadow details, especially in the opening scenes with Sapper in his darkened home. This is a demo-worthy disc, to be certain!

The disc makes note that the Dolby Atmos track, with Dolby True HD 7.1 compatibility, is the preferred choice by the filmmaker (which begs the question of why Warner felt it was necessary to, yet again, include a redundant DTS-HD Master Audio 5.1 track). Much like the video presentation, the Atmos track is demo-worthy as well, providing the viewer with a truly immersive aural experience. LFE is strong, adding some real punch to many of the gunshots and explosions in the film and to the score by Hans Zimmer and Benjamin Wallfisch. Heights are used effectively to provide a sense that vehicles are flying over head but also a subtle sense of environment with sounds of rain, crowd noise, and traffic. Dialogue is clear and understandable throughout, without music or effects drowning the characters’ voices.

As with most of Warner’s UHD releases, all of the special features can be found on the included Blu-ray edition of the film. I only wish the features had a bit meat to them.

Designing the World of Blade Runner 2049 (1080p; 21:55): A look at the production design and the challenge of paying homage to the original film while also showing us a much more devolved world thirty years later.

Prologues (1080p; 28:06): Three short films that originally appeared online prior to the movie’s release that provide some background of what happened between the two movies. 2022: Black Out is an anime telling of the infamous planet-wide Black Out referenced in the film, directed by Shinichiro Watanabe. 2036: Nexus Dawn, directed by Luke Scott, tells the story of Niander Wallace’s re-introduction of replicants. 2048: Nowhere to Run, also directed by Luke Scott, tells the backstory of Sapper (Dave Bautista). Each film is presented by Denis Villeneuve.

Blade Runner 101 (1080p; 11:22): Six very brief featurettes on the Blade Runner universe, including Blade Runners, The Replicant Evolution, The Rise of Wallace Corp, Welcome to 2049, Jois, and Within the Skies: Spinners, Pilotfish and Barracudas.

Digital Copy: An insert contains a code to redeem a digital copy thru Movies Anywhere. I redeemed my code on Vudu directly, and received access to streaming versions in 4K UHD on Vudu, Google Play Movies, and FandangoNow (via UltraViolet), while only HD on Amazon Video.

Blade Runner 2049 achieves the impossible by being a sequel that is worthy of its successor. Warner’s 4K UHD Blu-ray is quite possibly the best way to view the film, with its exceptional picture and sound. 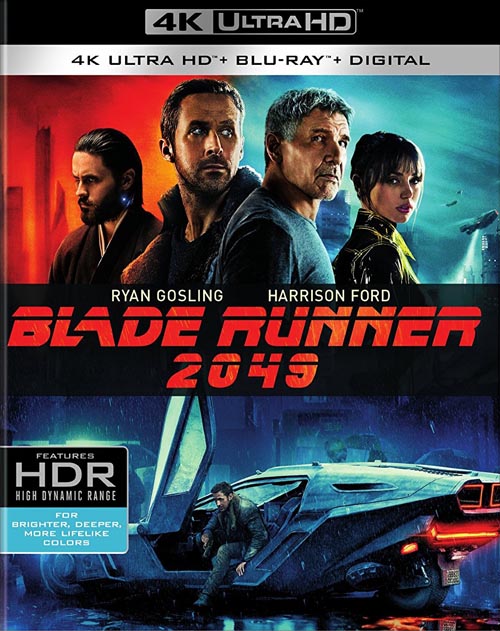