Spike Lee’s BlacKkKlansman is a case of truth being stranger than fiction, telling the story of how an African-American police detective managed to infiltrate the Klu Klux Klan in 1970s Colorado Springs.

They say that truth can be stranger than fiction, and Spike Lee’s BlacKkKlansman is definitely that. Police officer Ron Stallworth (John David Washington) is promoted to undercover detective by the Colorado Springs Police Department because they need a black detective to wear a wire and monitor a Black Panther rally where Kwame Ture (Corey Hawkins) is giving a speech. The rally was organized by the president of the Student Union at Colorado College, Patrice Dumas (Laura Harrier), a young woman that Stallworth becomes attracted to. After the rally, Stallworth is sitting in the squad room, awaiting his next assignment, and comes across a recruitment ad in the newspaper for the Klu Klux Klan. He picks up the phone and leaves a message, inquiring about membership, and is quickly called back by the local chapter president, Walter Breachway (Ryan Eggold, most recently seen in NBC’s New Amsterdam), who arranges a meeting. Quickly realizing that he very obviously can’t attend the meeting himself, he recruits fellow Detective Flip Zimmerman (Adam Driver) to take his place. The Klan take a liking to Zimmerman’s impersonation of Stallworth, who is inducted by Grand Wizard David Duke (Topher Grace). Stallworth and Zimmerman uncover that two of the members are military personnel from NORAD, and that the Klan plans to thwart a Civil Rights rally by Patrice and the Student Union.

That sounds like quite a tall tale, and although most of it is true, co-writer and director Spike Lee does take some creative license with the material. The actual events took place in 1979, but the timeline has been moved to 1972 to create more tension during a more turbulent time. Zimmerman’s true identity was never revealed in Stallworth’s memoir, and his Jewish ancestry was also created for dramatic effect. The bombing of the Civil Rights rally was also fabricated to build a more climactic third act. Even with those creative licenses, this is probably Spike Lee’s best films in recent years including just enough humor to appeal to a much wider audience than usual. Although the script does depict the Klan members as being not the sharpest tool in the shed, they are not your stereotypical redneck buffoons, and it is that lack of sharpness that makes them all the more dangerous (they say that a dull knife can do more damage than a sharp one). Performances are great all around, with John David Washington and Adam Driver having good chemistry together, and I would lay odds that Topher Grace may earn himself a Supporting Actor nomination as David Duke. The political overtones and message are not overbearing for most of the film (they are there, but not exactly in your face), at least until the final moments when Lee cuts to more recent news coverage of events including last year’s Unite the Right rally in Charlottesville, dedicating the film to rally protestor Heather Heyer, who was tragically killed during the incident.

BlacKkKlansman marked a return to 35mm film production for Spike Lee, and was completed as a 4K digital intermediate with Dolby Vision high dynamic range for its more premium theatrical engagements. Universal’s UHD release sports a very cinematic 2160p HEVC-encoded transfer with both HDR-10 and Dolby Vision high dynamic range that retains its theatrical 2.40:1 aspect ratio. Film grain is natural and organic, adding to the transfer’s cinematic feel. While colors appear somewhat subdued, they do appear more natural and accurate than on the included 1080p Blu-ray. Contrast is improved, with deeper blacks and more defined shadow details. Fine detail is stronger, too, particularly in clothing textures and frizzy afro hairstyles worn by Washington and Harrier.

BlacKkKlansman on UHD contains the same Dolby Atmos track found on the Blu-ray edition, and it proves that Atmos can be used quite effectively even in a low budget dramatic comedy like this one. Music of the early 1970s play a major role in the film’s soundtrack, and the songs are opened up across the wider and more expansive soundstage. Pay close attention to the scene where Kwame Ture gives his speech – the ambience of the hall is recreated to near perfection, his voice reverberating around the room with shouts and cheers seemingly appearing in all directions. LFE is deep and provides an extra punch where needed. Dialogue is clear and understandable throughout, without getting lost in the mix.

The special features are a bit light, but are included on both the UHD and Blu-ray editions.

Digital Copy: An insert contains a code the redeem a digital copy o Movies Anywhere, providing UHD versions on Vudu, Google Play Movies, and FandangoNow, yet only HD on Amazon Prime Video. I do not own an Apple TV or an XBOX One so cannot confirm the resolutions on iTunes and Microsoft Movies, respectively.

I really enjoyed BlacKkKlansman, much more than I had expected to. Presentation is excellent, but the special features are rather disappointing.

It's 4K/Dolby Vision on iTunes.
Expand signature
Crawdaddy's favorite "The Mandalorian" Quotes: "This is the Way" and "I have Spoken"

Thanks, Todd! I'll probably get this when the price goes down a bit. I loved it in the theater. It's a shame there aren't more significant extras on the disc, as this is the kind of movie that really cries out for them.

Good movie! The lack of special features is a letdown.
Reactions: Tino and Jake Lipson

Yeah, this is one of my favorite movies of the year so far. I agree with Sam P - the last five minutes are incredible.

I don't have time enough to watch all these DVDs!
Reactions: Tina_H_V and TravisR

Now that it’s been nominated for Best Picture, I wonder if it’ll receive a new edition with more bonus features. Sometimes they do that.
Expand signature
I am currently trying to collect all 540 Best pictures on Blu Ray!

battlebeast said:
Now that it’s been nominated for Best Picture, I wonder if it’ll receive a new edition with more bonus features. Sometimes they do that.
Click to expand... 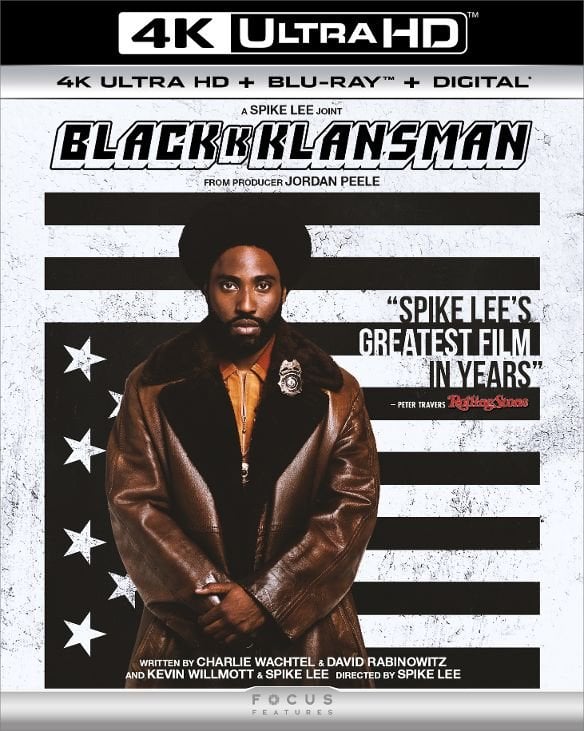