The Black Stallion Returns while not a patch on the original film offers a decent amount of picturesque adventure for fans of the original movie and its majestic title character.

Very few sequels to films as special of The Black Stallion could possibly hope to measure up to the parent film, and Robert Dalva’s The Black Stallion Returns certainly doesn’t. That isn’t to say there isn’t adventure to be had and some beautiful and picturesque landscapes to wallow in, but the tone is decidedly prosaic the second time around, and the film for all its entertainment value pretty much goes exactly where one might expect with very few surprises along the way.

After winning the big race that climaxed the original The Black Stallion, newspapers all over the world carry stories of the momentous achievement of the fabled horse and his young rider Alec Ramsey (Kelly Reno). But the horse’s original Moroccan owners (Woody Strode, Jodi Thelen) come to reclaim their prize and abduct the horse who is expected to represent its troupe in a traditional tribal race in the desert between rival African factions. Determined to find his horse now transported to a North African settlement outside Casablanca, Alec stows away on a Pan American flight, and once in Casablanca uses every amount of subterfuge he can muster to find his way back to his beloved “Black” known as “Shatan” to its owners. Along the way he meets the friendly English-speaking Raj (Vincent Spano) who takes him under his wing and crosses paths with the devious Kurr (Allen Goorwitz) from the rival Uruk tribe who’ll do anything to prevent Shatan from racing against their prize horse.

The script by Richard Kletter and Jerome Kass is pretty predictable all along the line right down to the climactic horse race where Alex must face off not only against the enemies of the tribe he’s representing but also against his friend Raj and his magnificent racehorse. Throughout, efforts are made to recall magical moments from the original film with some touches of the unspoken attachment between horse and rider we see under the opening credits and the music overpowering the sound effects as the feverish horse race comes down to its final heart-thumping conclusion, but that first hour of magical imagery that made The Black Stallion so very unique really can’t be duplicated even with the same actor (now noticeably four years older but according to the script still the same age). But there are also all the expected developments that provide no surprises at all including a long trek through the desert where Raj and Alec stretch every drop of water they can and finally end up at death’s door as Alec crawls up one final dune in the hopes that water will be found on the other side. Neither the script nor director Robert Dalva (who was graduated to the helming chair after editing the first film) does much with the strange customs Alec must adapt to during his sojourn in Morocco, and the feuding tribes are given only brief skirmishes here and there without much excitement developing. In an effort to get to that climactic race, it seems as if a great deal of promising narrative either went ignored or was simply underdeveloped.

Now clearly a teenager, Kelly Reno has lost a bit of the innocence and sweetness from the earlier film, and his character never seems to be clued in to the many dangers that surround him in this foreign place. He can still be appealing in singular moments, but his is not a riveting performance. Teri Garr as his mother is the only other actor from the original film repeating a role in the sequel, and she’s on and off very quickly in the film’s opening scenes. Vincent Spano is most appealing as the friendly, advice-giving Raj, and Woody Strode, Ferdinand Mayne, and Jodi Thelen all give solid supporting performances. As the resident villain of the piece, Allen Goorwitz (once billed as Allen Garfield) is entertainingly mischievous rather than a sadistic fiend so that later moments when he’s one-upped provide some welcome viewer satisfaction.

The film’s original theatrical 1.85:1 aspect ratio is faithfully rendered in 1080p resolution using the AVC codec. Sharpness varies a bit but is generally very pleasing with a decent amount of detail. Color is nicely rendered with solid primary colors and realistic skin tones (a bit rosy in the early going but more natural in later reels). Contrast, however, is not always consistently applied, and there is a sprinkling of dust specks throughout the presentation though no gaping scratches, marks, or debris. The film has been divided into  24 chapters.

The disc offers DTS-HD Master Audio 5.1 and 2.0 stereo sound mixes. In the early reels the 2.0 track seems more natural and full while the surround mix seems frontcentric with very little sound sent to the rear channels. Later on, however, the rear channels do come to life (especially during the race) and make for a winning aural experience. No age-related problems with hiss or crackle are present.

The Black Stallion Returns while not a patch on the original film offers a decent amount of picturesque adventure for fans of the original movie and its majestic title character. There are only 3,000 copies of this Blu-ray available. Those interested in purchasing it should go to either www.twilighttimemovies.com or www.screenarchives.com to see if product is still in stock. Information about the movie can also be found via Facebook at www.facebook.com/twilighttimemovies. 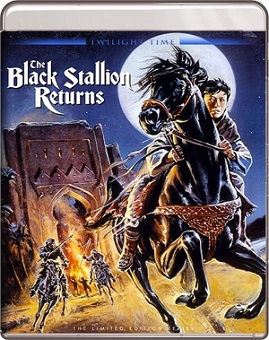