Worth seeing for impressive performances and "stranger than fiction" real-life events 3.5 Stars

Black Mass features Johnny Depp as real-life South Boston crime boss Whitey Bulger.  It dramatizes the circumstances under which Bulger exploited a relationship with FBI Agent John Connolly (Edgerton) to inform on his rivals and run the various activities of his “Winter Hill Gang” with seeming impunity for almost two decades.  The film follows various aspects of Bulger’s life during this period including his relationship with his powerful State Senator brother, Billy (Cumberbatch), his family tragedies, and his ruthless business dealings.  The latter are undertaken by Bulger with his close confidants including his lieutenant Stephen Flemmi (Cochrane), enforcer John Martorano (Brown), and protege Kevin Weeks (Plemons).  Interwoven with Bulger’s criminal dealings, the film also dramatizes how Connolly rationalized the continued cooperation with Bulger to his peers, superiors, and family.

Based upon the book Black Mass: Whitey Bulger, the FBI, and a Devil’s Deal by journalists Dick Lehr and Gerard O’Neill,  the events surrounding James “Whitey” Bulger’s collusion with the FBI are the stuff of classic gangster films.  As a matter of fact, Martin Scorsese borrowed liberally from the details of the Whitey Bulger case when  he adapted the Hong Kong film Infernal Affairs into his Oscar winning film The Departed in 2006.  Filmmakers wading into the organized crime genre have long shadows of legendary filmmakers such as Scorsese, Francis Ford Coppola, Howard Hawks, Brian De Palma, and just about every major Warner Bros. director of the 1930s with which to contend.   Black Mass may not emerge from that pack as an all-time classic of the genre, but it is a compulsively watchable entry thanks to a mesmerizing central performance by Johnny Depp.

Depp’s transformation into Bulger for this film is suprisingly convincing.  I’ll admit that watching the trailer for the film, I was not altogether convinced that I wanted to spend this much time with Depp in heavy make-up and facial prosthetic appliances.  It is even possible that audiences expecting another in his procession of figurative and actual mad hatter characters in recent years contributed to the film’s underwhelming box office performance.  That being said, by the end of his first scene in the film, I never thought of the artifice again and saw nothing but Whitey Bulger on the screen.  Depp is aided and abetted by an outstanding cast of supporting players in roles large and small.  I cannot speak to the veracity of their “Southie” accents, but within the world of the film, they certainly sounded like they all hailed from the same neighborhood.

While the mesmerizing central performance and top-notch supporting performances make Black Mass worth the time invested in watching it, the film stops short of achieving greatness due to over-use of familiar gangster movie tropes,  a too-reverent deference to its source material, and screenplay structural issues.

The reliance on familiar elements is best illustrated by a scene late in the film where Depp’s Bulger goes from cordial to confrontational to uproariously laughing at the ball-busting he has delivered to another character.  A viewer cannot help but compare it unfavorably to the iconic Joe Pesci “Funny how?” sequence from Scorsese’s Goodfellas.

The screenplay for Black Mass stays reasonably close to the established facts of the Whitey Bulger case, sometimes to its own detriment.  While these details themselves are interesting enough to provide a plot full of action and surprising turns, the film too often resists having a strong enough point of view on the facts to justify their inclusion in a dramatic narrative.  A simple, relatively non-spoilery example of this is a scene in which Whitey Bulger speaks to his brother about winning the Massachusetts Lottery.  This is based on a true event reported in newspapers, but its inclusion in the film is as just another bizarre “stranger than fiction” detail with no dramatic payoff.   The filmmakers do not buy into or dramatize any of the theories surrounding this occurrence (such as the belief that Bulger opportunistically used a customer winning the lottery at one of his stores to launder millions of dollars), making the inclusion of the event a vestigial appendage that does not advance plot or characterization.

Structurally, the opening acts of the film spend a lot of time establishing the relationship between Bulger and key people in his professional and personal lives.  This has a humanizing effect, and allows Johnny Depp’s inherent charisma to shine through Bulger’s lean mean exterior.  After Bulger makes his deal with the FBI, though, the film abandons those intriguing contradictions of personality and focuses almost exclusively on establishing him as a coldly calculating scheming murderous monster.  There are a couple of deeply affecting personal losses in between that help to smooth this transition, but transforming Bulger into a straight-up monster still feels less interesting than if the filmmakers had continued to embrace his combination of menace and charm.

One other structural shortcoming is that since the character of Bulger does not evolve that much during the course of the film, putting him at the center of events is not as dramatically compelling as if the film had focused more on the people influenced or corrupted by him.  Depp’s performance is great, and the film spends most of its time with him.  The arc of Edgerton’s character as he is seduced by proximity to Bulger’s criminal world is a more intriguing story line which gets less screen time.

The film is presented in AVC-encoded 1080p video letterboxed to the film’s original 2.4:1 aspect ratio.  Shot on film, the presentation exhibits a detailed and satisfying grain structure with a palette tilted towards cool hues.  Sharpness is excellent throughout and I noticed only one incident of very mild compression artifacts during a fade between two scenes.

The DTS-HD MA 5.1 track  presents the film’s soundtrack with excellent lossless fidelity.  The mix does not use the surrounds with much imagination although the often aggressive music score does get spread across all five channels.  Despite the minimal use of surround, effects and occasional dialog are aggressively panned across the front channels to match on-screen action.  Alternate language Dolby Digital 5.1 tracks are available in English DVS, French, Spanish, and Portuguese.

When the disc is first played, the viewer is greeted with the following series of skippable promos:

Johnny Depp: Becoming Whitey Bulger (12:24) focuses on the film’s lead actor, touching on topics including how he got information about Bulger given the limited amount of available audio and video material and unwillingness to meet, make-up and prosthesis, and the reactions of cast and crew to working with Depp as Bulger.  On-camera comments come from Depp, Cooper, Make-up Department Head Joel Harlow, Lehr, Cumberbatch, Julianne Nicholson (“Marianne Connolly”), Jessie Plemons (“Kevin Weeks”), David Harbour (“John Morris”), and Edgerton,

Black Mask is worth at least a rental due to the outstanding performances of Johnny Depp and the supporting cast in a “stranger than fiction” tale of modern day gangsters.  It fails to ascend to the heights of the best films in the gangster genre due to reliance on overused genre tropes, excessive reverence to its source material, and some screenplay structural issues.  The Blu-ray presentation features excellent film-like video and a solid audio presentation with excellent fidelity and limited surround use for anything but the aggressive music score.  The most intriguing extra is an hour long documentary on Bulger’s 15+ year fugitive period which ended in his 2011 arrest in Santa Monica, California. 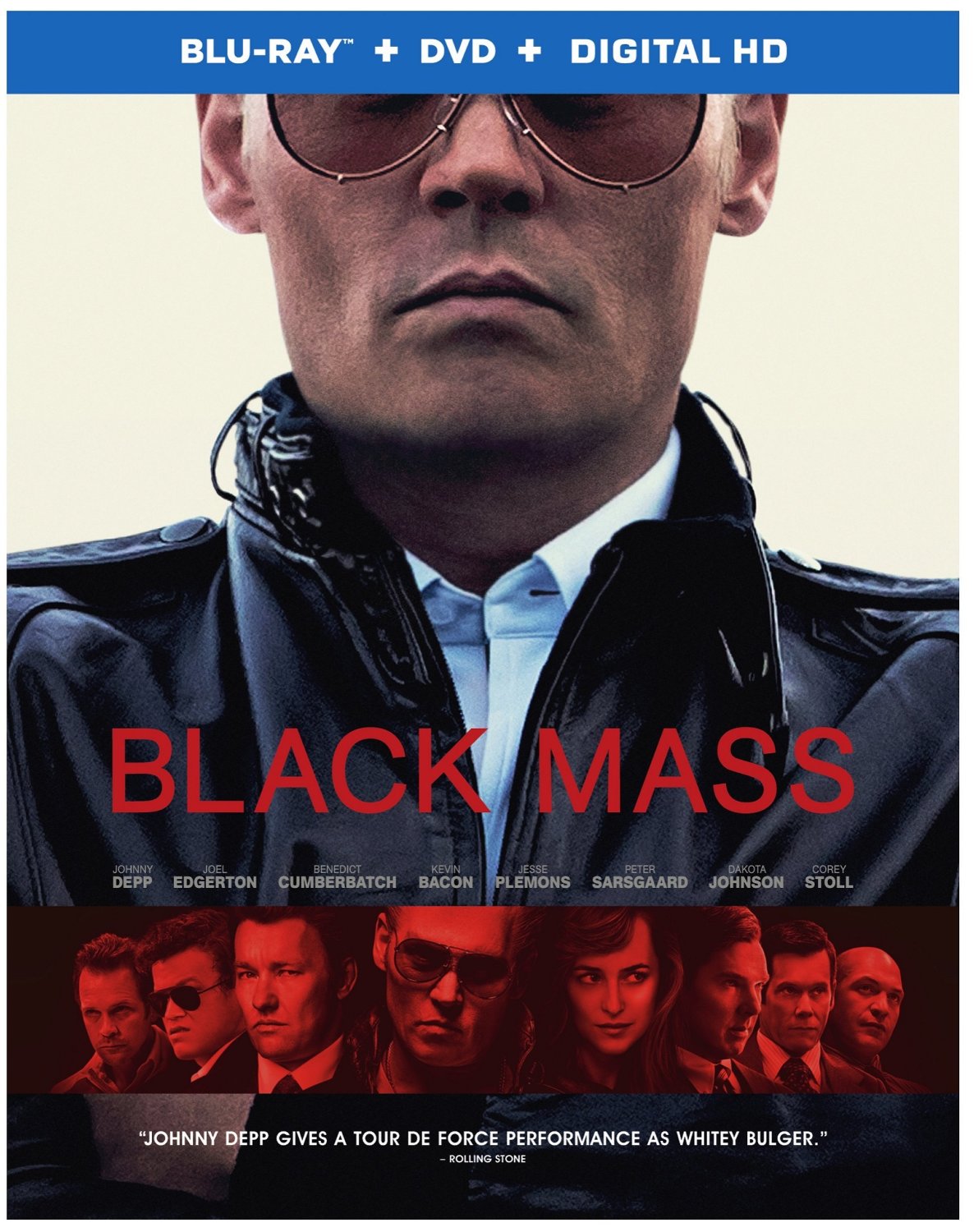