Forum List What's new Dark Style Change width
Log in Register
What's new Search
Menu
Log in
Register
Navigation
Install the app
More options
Dark Style
Close Menu
Posted on April 12, 2020 by t1g3r5fan
You are using an out of date browser. It may not display this or other websites correctly.
You should upgrade or use an alternative browser.

Though he’s mostly overlooked and forgotten today, director Roy William Neill was one of Hollywood’s prolific directors during their formative years; over the course of four decades, he made over 100 films, the most notable being 12 of the 14 Sherlock Holmes movies starring Basil Rathbone, The Black Room (1935), and Frankenstein Meets the Wolf Man (1943). Made right at the end of his career, Black Angel was one of the movies that helped to launch the burgeoning genre of film noir after WWII. Previously released on DVD by Universal, Arrow has licensed the film for Blu-ray release as part of their Academy line.

When the seductive singer Mavis Marlowe (Constance Dowling) is found strangled in her apartment, her lover Kirk Bennett (John Phillips) is spotted leaving the scene of the crime by her secretary; he ends up being found guilty of the murder and sent to death row, but his wife Catherine (June Vincent) is convinced that he was wrongly convicted. Working with Mavis’ heartbroken and alcoholic ex-husband and composer Martin Blair (Dan Duryea), Catherine sets out to find the real killer, which leads her to a shady nightclub owner (Peter Lorre) seen around Mavis’ apartment the night of her murder. However, an unexpected twist may just break this case open…

Made right as the film noir genre was really starting to get its bearings, Black Angel is a neat little crime drama with a few novel twists mixed in. Working from the novel by Cornell Woolrich (who reportedly hated the way movie altered his source material), a lot of the elements of film noir are in place here – the wronged man, the femme fatale, etc. – but they are subverted in a way where nothing’s quite what it seems on the surface. Director Roy William Neill also used his experience from shooting the Sherlock Holmes movies to give the movie its proper tone and darkness to really highlight the story. There really is not much to complain about here, except for the fact that Black Angel hasn’t really gotten the appreciation it deserves over the years; it’s a nifty little noir that plays the formula the same way Blair plays his piano here – very well done – and is deserving of some recognition as more than just a cult novelty, but as an underrated little gem in the film noir genre.

Though he made his career playing oily toughs, Dan Duryea makes for a sympathetic lead here with a twist; he also does his own piano playing here and quite well, too. June Vincent probably has the best role of her film career as the wife of the wrongly convicted man; she also does her own singing for one of the film’s songs. Peter Lorre brings his inimitable style to the part of the shady nightclub owner Mr. Marko, while Broderick Crawford – just a few years away from Oscar anointed immortality as the corrupt and corrupted politician Willie Stark in All the King’s Men (1949) – makes for an appropriately determined yet sympathetic police captain. Other notable parts here include Constance Dowling as the ill-fated femme fatale Mavis Marlowe, Wallace Ford as one of Martin’s friends, Hobart Cavanaugh as the caretaker of a seedy motel, former boxer Freddie Steele as Marko’s right hand man, John Phillips as the man wrongly sent to death row for Mavis’ murder, Ben Bard as the bartender, Junius Matthews as the sanitarium doctor in the film’s surprising climax, and dancers Maurice St. Clair and Vilova performing at Marko’s nightclub.

The film is presented in its original 1:37:1 aspect ratio for this release. Film grain is organic and strong throughout, with fine details rendered faithfully and gray scale and blacks given a faithful representation as well. There’s minimal instances of problems like dirt, scratches or print damage (such as tears and distortion) present, which means that this is likely the best the movie will look on home video and an upgrade over the previous Universal DVD.

Note: an issue has come up with the release in regards to the aspect ratio; those discs affected will notice a slight vertical compression in the frame, especially noticeable with the faces of the actors. Here’s the link to the replacement program if you managed to get a erroneous disc: https://arrowfilms.com/news/black-angel-replacement-programme/?fbclid=IwAR3jBlerhSkJrZOqHl9moevqvoFhBrc9im11AfO0aKYcOfvL7Ud33DG3PJk

The film’s original mono soundtrack is presented on a PCM track for this release. Dialogue is both strong and clear, with the sound mix and Frank Skinner’s score both given clarity and fidelity. There’s next to no issues like distortion, hissing or crackling present here, which makes this an improvement over the Universal DVD and likely the best the movie will ever sound on home video.

Commentary by film historian Alan K. Rode – Recorded for this release, Rode talks about the production as well as some information about its cast and crew, some of it humorous; a very insightful and informative track.

A Fitting End (20:53) – In this newly filmed featurette, Neil Sinyard gives some appreciation to the movie as well as its director.

While it has been overlooked over the years, Black Angel is really a well made film noir that’s deserving of a reappraisal as one of the genre’s better offerings. Arrow has done a solid job of giving the movie its Blu-ray debut, with solid marks for both audio and visual quality as well as an informative commentary track and an insightful featurette for bonus features. Highly recommended and worthy of upgrading from the previous Universal DVD. 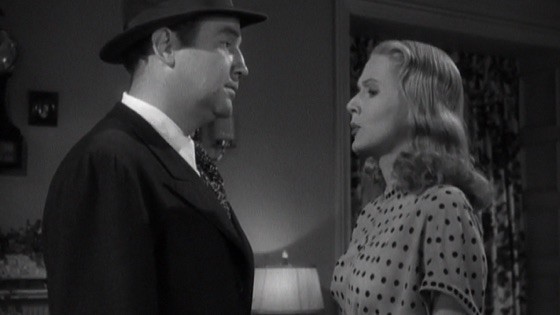 Thanks for the fine review now I have to watch my Blu-ray again because I didn't notice that authoring error so I need to double-check.

I've been holding fire on ordering this disc until the situation regarding the two discs has stabilized. I notice there's an Arrow sale on. Now might be the time to buy.

I love the film although, having read the novel, I understand why Cornell Woolrich was unhappy. The back cover of my paperback reads: Her husband calls her Angel Face - but when they arrest him for the murder of his "mistress" she turns into a dark angel of death. To prove her husband innocent, she descends into the black world of drugs, prostitution and gambling, bringing doom and destruction to all she meets . . . Purple prose and a bit of an exaggeration, but it gives a general idea of why, when uploading June Vincent into the Blondes thread, I said the film could be remade today to advantage.

I agree that this is probably the best role June Vincent ever played.

June Vincent, in this film, has an almost stoic, Bressonian kind of reserve, which immeasurably helps sell her character. It also helps to create a dream-like quality to the film, in which everything is slowed-down and floating, which is part of the original novel. I'm assuming Roy William Neil had something to do with this.

btw, great review! I was going to pass on this because of the stretching, but am happy to hear Arrow has addressed this matter.

It's a B-western from 1952 but June Vincent turns in a nice performance in William Witney's COLORADO SUNDOWN, a Rex Allen - Slim Pickens Republic picture.

Enjoyable film, and review! Is this the only film noir in which the composer Shostakovich is mentioned?

I'm looking into getting this on the secondary market and am curious if there's any way to tell if I'm ordering the corrected disc or not. The link for the replacement program above is a 404 error now. Anyone know?
You must log in or register to reply here.