Forum List What's new Dark Style Change width
Log in Register
What's new Search
Menu
Log in
Register
Navigation
Install the app
More options
Dark Style
Close Menu
Posted on January 13, 2017 by Matt Hough
You are using an out of date browser. It may not display this or other websites correctly.
You should upgrade or use an alternative browser.
Gripping biographical drama offers a riveting story and fine performances. 4.5 Stars

The important and oft neglected historical story behind the slave insurrections of 1831 comes to vivid life in Nate Parker’s The Birth of a Nation.

The important and oft neglected historical story behind the slave insurrections of 1831 comes to vivid life in Nate Parker’s The Birth of a Nation. Using vibrant performances and an impeccable recreation of the Old South to set the tale, writer-producer-director Parker has brought the story of Nat Turner to the screen with striking taste and humanity and only a slight stumble or two when symbolic imagery seems to get the better of him.

Born into slavery and taught at a young age that he was specially endowed by his creator with prophet-like powers of leadership and persuasion, Nat Turner (Tony Espinosa as a child, Nate Parker as an adult) receives kind treatment from the wife (Penelope Ann Miller) of his owner who takes him in hand and makes sure he gets an education with particular attention to the scriptures. As an adult, his ministerial gifts come in handy with the now grown family patriarch Samuel (Armie Hammer) who supplements the plantation’s income by being paid to have Nat go to neighboring plantations with recalcitrant slaves and preach scripture that supports their accepting their miserable fates without complaint. But constant exposure to atrocities against his brethren and a vicious attack on his wife (Aja Naomi King) that his owner doesn’t investigate convince Nat that he must gather his people together and fight for change.

Nate Parker’s four-year journey to bring the true story of Nat Turner to the screen has resulted in a moving and provocative tale, perhaps not quite as emotionally encompassing as the Oscar-winning 12 Years a Slave but trodding over much of the same territory and with many of the same emotional peaks and valleys. Parker and his team have created a wonderfully authentic feeling for time and place while at the same time resisting making the movie a virtual horror show of atrocities which inevitably lead Nat to rebelling (what we do see is gruesome enough but tastefully discreet for the most part). If first-time feature director Parker indulges a bit in some quaint and obvious symbolism (a bleeding ear of corn taken straight from Gray’s Confessions, both young and mature versions of Nat in a dreamy African tribal hallucination, a winged angel come to take his spirit home, a garden of hanging corpses accompanied by the anachronistically contemporary “Strange Fruit”), it doesn’t harmfully mar the tone of the piece or most of the vital and pointed images that dot the landscape of this production. The climactic face-off between slaves and owners is blunt and brutal (remarkably, this entire sequence was shot in one day), and yet the film doesn’t just wallow in misery: there are scenes of family bonding with Nat, his mother (Aunjanue Ellis) and grandmother (Esther Scott), two different wedding ceremonies, and church services and baptisms that give the movie its own identity and some genuine warmth, most welcome with the otherwise disturbing racism and mistreatment that proves the unavoidable motivation for the rebellion that follows.

It’s remarkable that not only has Nate Parker written, produced, and directed the film but that he also stars in its largest role. It’s a herculean task that he does quite well by as he carefully modulates Nat Turner’s growing desperation with his unfortunate lot in life, finally prodded into action by a series of four disturbances to his psyche that he can’t explain away. Armie Hammer does some impressive modulation of his own as the plantation owner whose financial base begins to ebb as he sinks further into alcoholism and loses his respect for the value of human lives. Jackie Earle Haley makes a marvelous snarling villain for the piece, patrolman Raymond Cobb whose run-ins with Nat from an early age always have the tinge of violence and intimidation about them. Esther Scott literally breathes the soul of motherhood as Nat’s grandmother, and Aja Naomi King as Nat’s wife and Aunjanue Ellis as Nat’s mother likewise get spotlight moments to impress. Penelope Ann Miller is the virtual light of goodness as the kindly plantation wife Elizabeth Turner who educates the young Nat and spends her life looking out for his best interests, obviously proud of what he has become and the role she played in making him a man of soul and truth. Nat’s polar opposite, the Turner plantation major domo who believes in playing the game no matter the cost, is nicely handled by Roger Guenveur Smith while Dwight Henry plays Nat’s father somewhat unsteadily in an early key scene.

The 2.40:1 theatrical aspect ratio is faithfully presented in the 2160p transfer using the HEVC codec. Sharpness is excellent throughout, and there are no problems with color purity or solidity. Black levels are first-rate with outstanding shadow detail. HDR aids nicely in giving those expansive cotton fields some pop, and a scene where rays of sunlight burst through wall slats is especially impressive visually. Contrast is nicely maintained throughout, even in many scenes with misty morning fog swirling about. The movie has been divided into 28 chapters.

Even though the sound design is only DTS-HD Master Audio 5.1 (it was an independently financed movie), the sound mix is quite expressive with the especially involving (though perhaps sometimes a trifle heavy-handed) Henry Jackman background score and choral music filling the fronts and rears. Atmospheric effects get split placements in the appropriate channels, and the dialogue while mostly rooted to the center channel occasionally gets some spread into other spheres of the soundstage.

The UHD disc contains the feature film and the following bonuses (which are also repeated on the enclosed Blu-ray disc):

Audio Commentary: a rather unnecessary track since the writer-producer-director-star of the piece already contributes almost solely to several other documentary pieces in the set, Nate Parker narrates a scene-by-scene description of his motivations and executions of his vision.

Deleted Scenes (3:25, HD): two scenes which may be watched individually or together and with or without audio commentary from Nate Parker.

The remaining bonuses are contained on the enclosed Blu-ray disc:

Rise Up: The Legacy of Nat Turner (47:13, HD): actor Roger Guenveur Smith takes a tour of the areas of Virginia where the story took place, aided in his search for the true story of Nat Turner by a host of professors and historians eager to explain the story.

The Birth of a Nation: The Making of a Movement (41:46, HD): Nate Parker describes the four-year journey of writing his script and getting it produced, his casting process, his understanding of Nat’s life and motivations, and the specifics of the twenty-seven day shooting schedule.

#AmeriCAN (18:33, HD): Nate Parker’s short film delving into the consequences of rash behavior also has optional commentary by the director.

Celebration of Independent Voices (4:38, HD): an introduction of sorts by Nate Parker to the film before its Sundance premiere in 2016 where it received both the Audience Award and the Grand Jury Prize.

Shooting Script: Nate Parker’s screenplay can be paged through manually.

Art Gallery (HD): thirty-three behind-the-scenes stills shot during the making of the movie.

Trailers (4:55, HD): a teaser trailer and two theatrical trailers which may be watched together or separately.

Blu-ray/Digital Copy: the Blu-ray disc and a code sheet are enclosed in the case.

A biographical film of great power and persuasion, The Birth of a Nation tells its own pre-Civil War story showing disturbances which would lead three decades later to a national uprising. The Blu-ray disc contains outstanding bonus material on the historical figure at the center of the story and both the Blu-ray and UHD disc present near-reference picture and sound for its best possible presentation. Highly recommended!

An incredibly well-produced and acted film, that, at least to me, made the points in a much better way than the latest Roots outing, which I disliked immensely.

Unfortunately, what should have been a very important film is outdone by the fact that so little of it is actually true. Very disappointing.
You must log in or register to reply here. 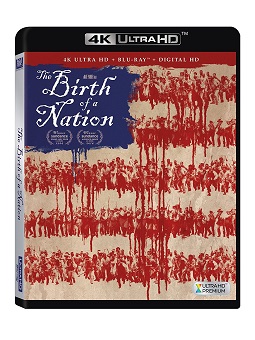