While ostensibly about Bruce Lee’s transition from master of Wing Chun kung fu to a new fighting style called Jeet Kune Do, the genesis of today’s mixed martial arts, Birth of the Dragon only gives us some of the backstory of two fascinating men.

A monumental face-off between two martial arts masters forms merely the backdrop of George Nolfi’s Birth of the Dragon, ostensibly a biographical incident in the life of kung fu master Bruce Lee but oddly a movie that subordinates the story of this legendary battle to a tale of a Caucasian man trying to free a Chinese girl from enslavement. And it’s telling that the film’s focal point of that one-of-a-kind fight proves less revelatory and less entertaining than other fights in the movie.

Young Bruce Lee (Philip Ng) is trying to make a name for himself in locally produced martial arts films while working as a kung fu instructor in 1964 San Francisco. One of his Caucasian students Steve McKee (Billy Magnussen) respects Lee’s quickness, strength, and agility, but he doesn’t feel he’s progressing as he should. Steve meets and falls for the beautiful Xiulan Quan (Qu Jingjing) who’s working as a waitress in an upper crust restaurant in Chinatown while indentured to the Chinese underworld with no way to rescue her from her servitude. When legendary Northern Shaolin martial arts master Wong Jack Man (Xia Yu) arrives in San Francisco seeking to serve penance for a wrong he committed in China, Steve leaves Bruce’s school and asks Wong to not only train him but also to intercede with the Chinese to release his girl friend. Bruce, always the hustler, realizes that he must challenge the kung fu master to a no-holds-barred fight to legitimize his own Wing Chun style of kung fu, and Steve manages to barter a fight between the two as a means of freeing Xiulan.

With a title like Birth of the Dragon and with Bruce Lee as the cocky peacock master of quick, slick moves as a focal point, you’d think the movie would be about Lee’s rise to national prominence, but you’d be mistaken. The Christopher Wilkinson-Stephen J. Rivele screenplay uses this fabled battle between the two fighting legends as a means to tell a tired story of young love with Bruce Lee a supporting character in his own story. Director George Nolfi and his fight choreographers stage a number of fascinating martial encounters: Lee demonstrates his blinding expertise a couple of times both in fighting half a dozen ruffians and later at a karate contest that leaves the karate practitioners reeling, and the film’s most entertaining moment comes at the climax when Lee and Wong combine forces to take down the underworld henchmen who refuse to let Steve’s inamorata go, a beautifully staged and nicely sustained series of encounters in which each of the masters do their individual things to achieve the same result: total defeat of their adversaries. The battle between the two of them which allegedly took place on November 24, 1964, is something of a letdown, a ten-minute battle (in reality, the match between the two held privately might not have lasted as long as three minutes) in which momentum swings from one to the other and slow motion is used tiresomely to punctuate specific highlights for each man. But the two men and their antithetical philosophies of combat are so much more fascinating than the white bread story of Steve McKee and his infatuation that every moment away from the two warriors, seeing them train and work and live, proves to have a negative impact on the film’s real strengths.

Philip Ng’s portrayal of Bruce Lee seems to be based on his television and movie personas: cocksure, confident, and always ready to strike rather than being able to dig beneath the surface to see what the real man might have been like (he mentions being married at one point, but we never see his wife or see him in any domestic situation). Xia Yu’s quiet, humble, and thoughtful interpretation of Wong Jack Man is very strong and makes the character a greatly appealing one, a person we’d love to have gotten to know better through the movie, but it doesn’t happen. Both men, however, have cat-like grace, speed, and reflexes maneuvering through the intricate choreography seamlessly. Billy Magnussen is all earnestness and good intentions as Steve, but the script doesn’t give him much of a character to play either. Simon Yin offers much of the comic relief in the movie as Steve’s training friend Vinnie Wei. Qu Jingjing is lovely as Xiulan Quan but doesn’t really have much to do apart from acting afraid.

The film’s 2.40:1 theatrical aspect ratio is offering in 1080p resolution using the AVC codec. Colors are bright and bold throughout, and skin tones are believable and most appealing. Sharpness is excellent, and close-ups allow us to study details in facial features with no difficulty. Contrast has been consistently applied for a first-rate picture. Subtitles when they occur are always bright and easy to read. The movie has been divided into 20 chapters.

The DTS-HD Master Audio 5.1 track is a very good one if not completely exemplary. Dialogue has been well recorded and has been placed in the center channel. The evocative music by Reza Safinia and H. Scott Salinas gets the most effective placement in the surround channels. Ambient sounds vary: sometimes they’re nicely placed in the fronts and rears and extend the soundstage impressively but at other times they seem subdued or absent lessening the impact of individual scenes.

Birth of the Dragon: Behind the Scenes (5:54, HD): four very brief vignettes featuring a look at the work that went into the production. Philip Ng discusses how he got into character as Bruce Lee. Ng and Xia Yu discuss the differences between their two characters and how they approached playing them. Producer Michael London talks about his hopes for bringing this unknown story to the screen. Stunt choreographer Andrew Chin talks about the moves for the fight scenes and the amount of training the actors went through to achieve it so effortlessly on the screen.

While ostensibly about Bruce Lee’s transition from master of Wing Chun kung fu to a new style called Jeet Kune Do, the genesis of today’s mixed martial arts, Birth of the Dragon only gives us some of the backstory of two fascinating men plugging their historic meeting into an overly familiar fictional story of young love that we’ve seen hundreds of times before in the movies. 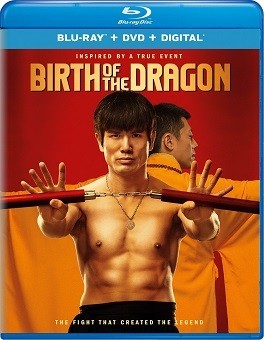