An uneven psychological drama with a great star turn 3 Stars

Ah, the lives of the rich and famous: how complicated they are! Luca Guadagnino’s A Bigger Splash, an English language rethink of the film La Piscine, allows us to luxuriate in the trappings of the wealthy while peeking behind closed doors at the machinations in the past which got them into the situations in which they now face decisions in the present day which will impact those around them.

Ah, the lives of the rich and famous: how complicated they are! Luca Guadagnino’s A Bigger Splash, an English language rethink of the film La Piscine, allows us to luxuriate in the trappings of the wealthy while peeking behind closed doors at the machinations in the past which got them into the situations in which they now face decisions in the present day which will impact those around them. This overlong psychological examination of four tortured souls is spotty and mostly unsatisfying, but there is still fine acting and beautiful scenery on display here which help make the journey with these people one worth taking.

On vocal rest after undergoing surgery on her vocal cords, rock star Marianne Lane (Tilda Swinton) and her lover documentary filmmaker Paul De Smedt (Matthias Schoenaerts) have taken a villa on the volcanic island of Pantelleria for her recuperation. Dropping into their lives is her former lover and manager Harry Hawkes (Ralph Fiennes) and his twenty-two year old daughter Penelope (Dakota Johnson). Six years before, Harry had tired of tending to Marianne’s physical and emotional needs and had introduced Paul to her in the hopes he’d become his replacement in her life. Now that time has passed, Harry misses what they had together and returns with ulterior motives, his daughter very much being a part of his scheme. With Harry trying to be the life of the party and Penelope using her Lolita-like wiles on Paul, the situation becomes quite volatile to the point that something monumental is bound to occur.

David Kajganich’s screenplay takes its time providing backstory for the more adult characters but in non-linear fashion: the flashbacks occur at salient moments to provide just enough information to fill in some blanks about these people and their shaky meanderings in their so-called lives. He provides a hilarious, almost Auntie Mame-style introduction for Harry in the film: a live wire, “life is a banquet” kind of man who strips his clothes off with abandon, flirts with people of both sexes, and generally pushes the boundaries of propriety with his every word and deed. Kajganich also chooses carefully to leave certain interactions later in the film to our imaginations: we know Penelope is trying her darndest to seduce Paul, but whether she succeeds or not remains one of the film’s enigmas with clues proffered supporting both the affirmative and the negative. Elsewhere, though, his character building seems incomplete with two of the four main persons not displaying clear motivations or satisfactory reactions to things that are happening (why do Paul and Marianne allow themselves to be pawns?) Director Luca Guadagnino makes sure we get generous views of Pantelleria with its green vistas dotted with houses and the village, rocky shores, and clear Mediterranean waters, and he really takes our breath away with a fantastic pullback at a climactic moment in the story, but he’s less successful getting a firm handle on characters who can have anything they want and yet seem unable to articulate their contentment or an unwillingness to be manipulated. Both director and screenwriter seem to be at fault here.

Ralph Fiennes has by far the showiest of the film’s roles: a vivacious if sometimes bordering on boorish man regretful of an earlier decision and here trying to alter it. He’s both joyous and pathetic in turns and appealing and obnoxious, too, making for a complex characterization that’s the best in the movie. Dakota Johnson is appropriately sultry if a tad obvious in her calculations though she does have a few surprises to spring on the viewer before the end of the film. Tilda Swinton’s role requires her to be mute for much of the movie (or at best speak in hoarse whispers), but she can express great emotion with her eyes and facial features and even if she’s completely unconvincing as an androgynous rock star (she could have just as easily played an actress), her feelings are never hidden from the audience. Matthias Schoenaerts has all the physical goods to be the resident hunk in her life (several brief sex scenes leave nothing to the imagination) and does all right with some more emotional moments, too. Corrado Guzzanti has a couple of excellent scenes as the police captain entwined with these glamorous people.

The film is framed at its theatrical 1.85:1 aspect ratio and is presented in 1080p resolution using the AVC codec. Sharpness isn’t always a strong element of the photography though detail can be very good. Odd soft shots here and there are somewhat puzzling. Color seems to be a tad bleached in the early reels though after a tragedy in the film color seems more normal and balanced. Skin tones, however, are always lifelike. Contrast has been consistently applied throughout. The movie has been divided into 32 chapters.

The DTS-HD Master Audio 5.1 sound mix places the well-recorded dialogue in the center channel. Background score and pop tunes by the Rolling Stones and others fill both the fronts and rears. Split effects occasionally get the surround treatment (even some panning through the soundstage) though they’re often more frontcentric.

A Bigger Splash offers Ralph Fiennes a fantastic opportunity to show his stuff (both literally and figuratively), and while the story is somewhat unfulfilling, fans of the stars may want to at least consider a rental. 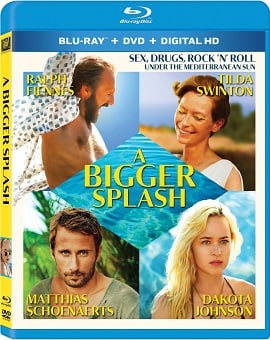