An update on the original Big Fat Liar with a new cast but the same basic scenario, Ron Oliver’s Bigger Fatter Liar doesn’t improve on the original farce in any way with its strained slapstick and cartoonish characters emerging as more irritating than ingratiating.

An update on the original Big Fat Liar with new cast but the same basic scenario, Ron Oliver’s Bigger Fatter Liar doesn’t improve on the original farce in any way with its strained slapstick and cartoonish characters emerging as more irritating than ingratiating. A decent cast of actors certainly tries to pump life into this wheezy old comic revenge scenario, but the movie is basically D.O.A. with little hope of resuscitation.

Chronic liar Kevin Shepard (Ricky Garcia) usually finds clever ways around his fabrications, but when a software mogul Alan Wolf (Barry Bostwick) manages to steal the video game idea Kevin had written up as a school project, no one including Kevin’s dad Tom (Paul McGillion) or his teacher (Lisa MacFadden) will believe his idea was unlawfully taken. The result is a failing grade and summer school for the intrepid fibber. When Kevin’s father has to go to New York for a few days on business, Kevin enlists best friend Becca (Jodelle Ferland) to come with him to San Francisco to confront Wolf at his business and force him to confess to his crimes. When Wolf refuses, Kevin declares all-out war on the deceitful businessman and with his acumen with technology and Wolf’s alienation of everyone who works for him, it makes it easy for Kevin to exact a painful revenge.

David H. Steinberg’s screenplay uses the same basic set-up for the narrative as the earlier theatrical film but with the villainous mogul a male this time rather than a female and the advances in technology making it easier for Kevin and Becca to gain access to Wolf’s personal information and live high on his dime covered by director Ron Oliver in a montage of impulse shopping for expensive clothes, first class dining, and an elite hotel suite. Kevin’s initial workarounds for quick dressing (a Rube Goldberg-ish invention in his bedroom), getting a prime parking place at school, and his quick way with a lie are initial signs of his laudable ingenuity (for all of the wrong reasons, of course), and Steinberg has made his villain thoroughly reprehensible and greedy so that we don’t mind all of the endless pranks Kevin and Becca pull on him to exact Kevin’s revenge. Of course, this being a family comedy, nothing that is done to the scumbag is life-threatening (irremovable kabuki make-up, sandbagging his car, draining his credit cards), and since everyone in the story is pretty cartoonishly one-dimensional, intentional heroes and villains are pretty easy to spot, and the simplistic theme of honesty being the best policy hardly delves into more than the surface level of these characters.

Ricky Garcia offers a fresh-faced, choir boy innocence to go along with his (basically) white lies which have gotten him into trouble, and since the script never resorts to foul mouthed or toilet-based humor, Garcia’s Kevin emerges as almost cherubic even at his worst. There’s very little hint of any sexual attraction between Kevin and Jodelle Ferland’s Becca; rather the two are chums united through their friendship to accomplishing this revenge mission. Ferland’s performance is adequate though she’s more a bystander to Kevin’s shenanigans than a full blown participant. Barry Bostwick gets to chew the scenery to his heart’s content as the comic villain who must bear the brunt of vengeance that Kevin is seeking. Also taking part in the revenge scenario is Wolf’s former business partner Ivan Slobodovich, now reduced to a limousine chauffeur due to Wolf’s dishonesty. Kevin O’Grady plays him with a thick Middle European accent but a fun sense of the absurd. Andrew Herr does nicely as the owner of the software company that employs Bostwick’s Wolf, and April Telek supports well as Wolf’s verbally abused executive secretary. Paul McGillion has a few scenes as Kevin’s disappointed dad who, of course, doesn’t believe his chronic liar of a son which naturally launches the tale into its farcical build-up.

This made-for-home video feature has been framed at 1.78:1 and is presented in a transfer that’s been anamorphically enhanced for widescreen televisions. While sharpness is pleasing rather than razor-edged, for a standard definition presentation, it is above average. Color is nicely presented and always under control with believable skin tones throughout. Contrast has been consistently applied, and the picture is generally bright and inviting. The movie has been divided into 20 chapters.

The Dolby Digital 5.1 sound mix gets most of its surround elements from the Peter Allen background score which has been threaded through the fronts and rears. Other atmospheric effects seem more directed to the front channels rather than being given a true surround environment. Dialogue has been well recorded and has been placed in the center channel.

The Making of Bigger Fatter Liar (6:01): director Ron Oliver, producer Justin Bursch, and stars Ricky Garcia, Jodelle Ferland, and Barry Bostwick describe the relaxed nature of the set and the fun of making this movie together.

Bigger Fatter Liar is a rather forgettable home video family comedy that borrows the premise from the original Big Fat Liar and does nothing particularly new or inventive with it. This strictly DVD release offers decent picture and sound for a low budget feature of this type. 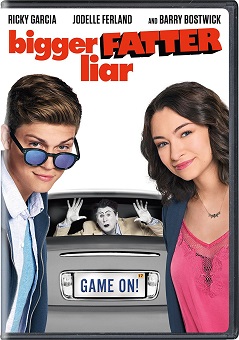