Forum List What's new Dark Style Change width
Log in Register
What's new Search
Menu
Log in
Register
Navigation
Install the app
More options
Dark Style
Close Menu
Posted on December 3, 2019 by Todd Erwin
You are using an out of date browser. It may not display this or other websites correctly.
You should upgrade or use an alternative browser.
Great new features 4.5 Stars

John Carpenter’s Big Trouble in Little China is a film that is almost impossible to describe, other than a piece of insane brilliance that was ahead of its time. Shout! Factory’s new Collector’s Edition release retains the special features and commentary from the previous Fox Blu-ray release, adding two new commentary tracks plus new interviews.

Truck driver Jack Burton (Kurt Russell) arrives in San Francisco, stops off to gamble with his good friend Wang Chi (Dennis Dun), who loses his shirt to Jack. Jack then escorts Wang to the airport to pick up Miao Yin (Suzee Pai), Wang’s fiancée. They run into lawyer Gracie Law (Kim Cattrall), who is there to pick up a young immigrant before she is kidnapped and sold as a slave. Instead, the gang members kidnap Miao Yin, who is much more valuable because of her rare green eyes. Jack and Wang chase them back to Chinatown, only to be stopped by a gang confrontation in which Jack’s truck gets stolen. As it turns out, Miao Yin has been handed over to underground (quite literally) crime lord David Lo Pan (James Hong), who is actually a 2,000 year old man cursed to walk the earth until he marries and sacrifices a green-eyed woman to appease the god he offended. Tour bus guide Egg Shen (Victor Wong) leads Wang, Jack, and a small band of mercenaries into the catacombs of Lo Pan underneath Chinatown in an attempt to take out Lo Pan and rescue Maio Yin.

A mash-up of Asian mysticism, martial arts, horror, comedy and western motifs (it was originally conceived and written as a period western), John Carpenter’s Big Trouble in Little China is a film that most either love or just don’t get it. Part of the problem is that the movie didn’t truly find its audience until home video and cable, and this is a movie that plays much better with a large and enthusiastic audience. I had always thought Big Trouble was a fun film, until I had the chance to see it just a few years ago at a screening on the Fox lot where the theater was near full capacity, nearly all of them fans of the movie, ranking as one of my favorite movie-going experiences. Nothing is quite what it seems in Big Trouble, essentially making Russell’s Jack Burton the none-too-bright and full-of-himself sidekick to Dun’s Wang Chi. Russell obviously is having a blast playing the clumsy doofus, always several steps behind all the action going on around him, while Dun plays the role mostly straight. James Hong’s Lo Pan is bat-shit crazy and plays the part to the hilt, often enjoying the strange dialogue he gets to say, while Victor Wong’s Egg Shen also has a few screws loose, with his bizarre potions and sayings. Cattrall’s Gracie Law is often annoying (but in a good way), playing along with all the bizarre happenings and does have some chemistry with Russell in their will they or won’t they get together relationship. While some may find Carpenter’s direction all over the place, I found it fit in perfectly with the crazy plot. Big Trouble in Little China, though, is not a movie for everybody because it is just so bizarre and often silly. But that is why many really love it, although with its subplot of human trafficking, I doubt it could be made in today’s environment.

Although it is not mentioned anywhere in Shout! Factory’s press release, I have a feeling this new Collector’s Edition was harvested from Fox’s recent 4K scan that was screened on the lot a few years ago (but I could be wrong). There are subtle differences from the 2009 Fox Blu-ray, such as improved contrast and sharper detail. Silk gowns look more like silk, and the details in Lo Pan’s wedding gown are much more distinct in this release. Colors are a bit more refined, especially reds that were very close to blooming on the previous release, while here they are more vivid without looking overly saturated.

Shout Factory has included two English language tracks, a default DTS-HD MA 5.1 and a Dolby Digital 2.0 stereo surround. These sound like the same mixes found on the previous Fox release. The DTS-HD track has the wider soundstage and lower end, with better directionality of sound effects. For a mid-1980s era soundtrack, it sounds quite good.

Shout! Factory’s Collector’s Edition is a 2-disc set, with Disc One housing the movie, audio commentaries (obviously), and the bulk of the archival bonus material. Disc Two contains the bulk of the new interviews and many of the carryover features from the 2013 UK Arrow Video release.

Disc One:
Audio Commentary with Producer Larry Franco: Moderated by Justin Beahm, Franco talks about his career in show business and working with John Carpenter. This track is accessible from the Audio sub-menu. **NEW**

Audio Commentary with Special Effects Artist Steve Johnson: Moderated by Filmmaker Anthony C. Ferrante (Sharknado), Johnson discusses his work with John Carpenter and how he broke in to the business. This track is accessible from the Audio sub-menu. **NEW**

Audio Commentary with Director John Carpenter and Actor Kurt Russell: Ported over from previous releases, the two long-time friends kick back and have a great time reminiscing about making the movie together. This track is accessible from the Audio sub-menu.

Electronic Press Kit (480i; 27:26): Video reel sent out to media outlets prior to the film’s theatrical release.

Disc Two:
You’re the Hero with Actor Dennis Dun (1080p; 14:14): The actor discusses his career, working with John Carpenter and James Hong, his chemistry with Kurt Russell, and how he landed the role. **NEW**

The Soul of Lo Pan with Actor James Hong (1080p; 23:57): The actor discusses his long career, growing up in Minnesota, and making Big Trouble in Little China. **NEW**

Able to Be Myself with Actor Donald Li (1080p; 18:29): The actor discusses his inspiration with Robert DeNiro and working on Big Trouble in Little China. **NEW**

The Tao of Thunder with Actor Carter Wong (1080p; 25:47): The actor, who has a rather thick accent, is subtitled and discusses his childhood, getting cast in Michael Cimino’s Year of the Dragon and then Big Trouble in Little China, and his new movie studio in China. **NEW**

The Tao of Rain with Actor Peter Kwong (1080p; 28:34): The actor discusses his American heritage, his career, and working on Big Trouble in Little China. **NEW**

Damn Wilie Prescott and the Horse He Rode In On with Writer W.D. Richter (1080p; 20:31): Richter discusses his first job after directing The Adventures of Buckaroo Banzai Across the Eighth Dimension, which was to “adapt” the period western screenplay into a more contemporary piece that we know and love as Big Trouble in Little China. **NEW**

It Was a Western Ghost Story with Writer Gary Goldman (1080p; 27:50): Goldman discusses the origins of the screenplay, developing the story, and selling the script to the studio. **NEW**

The Poetry of Motion: Martial Arts Choreographer James Lew (1080p; 35:01): Lew discusses his training and stuntwork on the film. **NEW**

Into the Mystic Night with The Coupe De Villes Member Nick Castle (1080p; 12:35): Castle discusses his love for musicals, studying at USC, and playing music with John Carpenter. **NEW**

Since We Were Kids with 2nd Unit Director / The Coupe De Villes Member Tommy Lee Wallace (1080p; 28:51): Wallace discusses his childhood with John Carpenter, his passion for music, his career and working on Big Trouble in Litte China. **NEW**

Being Jack Burton with Actor Kurt Russell (1080p; 20:57): Ported from the Arrow UK release, Russell discusses his working relationship with John Carpenter and working on Big Trouble in Little China.

Carpenter & I with Director of Photography Dean Cundey (1080p; Ported from the Arrow UK release, Cundey discusses his long collaboration with John Carpenter and making Big Trouble in Little China.

Producing Big Trouble with Producer Larry Franco (1080p; 15:21): Ported from the Arrow UK release, much of the material is also covered in his commentary track.

Vintage Featurette (upscaled 1080p; 7:26): An old behind the scenes featurette.

Die hard fans of the film will want this edition for the wealth of old and new special features alone.

Good Lord, what a lot of bonus features. Do you recommend an upgrade from the old Blu?

Admittedly this may only be a disappointment to me, but I always felt that opening scene with Egg Shen basically giving the plot away was useless. On a director's commentary Carpenter revealed the studio found it confusing that Jack didn't seem all that heroic, and insisted they shoot that scene explaining to the audience that he was a hero. You know. Because we're dumb.

Anyway in the old BD release I could hit Chapter Forward once and get right to the opening credits just past the Egg Shen scene. To see the film as Carpenter intended (you're just introduced to this loud mouthed braggart and don't know what to make of him).

In this new disc, the chapter stops have been greatly reduced and Chapter 2 takes you well into the movie.

Come on Fox, how about a 4K UHD release?

dpippel said:
Come on Fox, how about a 4K UHD release?
Click to expand...

Full disclosure: I did not do a true A/B, pause, still frame, screen cap comparison.

Since I was bummed out about the change in chapter stops (interestingly the original BD had 45, the new one has 12), I dug my old disc out.

Just quickly going back and forth between them (which was not an instantaneous switch since I have to eject, cue up and play) to my eyes I couldn't readily distinguish a difference between the two transfers. Not to say there isn't, I'm sure someone eventually will have comparison screencaps up. Just that in normal viewing from a distance, they both seemed to be very good transfers and I couldn't really tell one from the other.

So now I just combined all the discs in the steelbook packaging, I will use the original BD to skip the unnecessary prologue speech by Egg Shen, and use the other discs for their expanded extra features.

In the photo for the review, I just have to note how beautiful Kim Catrell is, even in the heavy makeup.

My next disc to get from Shout. I'm getting the set that has a poster & 45 record.
It should be fun to watch again. After all this time.

Going to get the set that has the poster &amp; green record.

Love this movie! I have a 1:6 action figure of Jack Burton that I had Kurt Russell sign when I met him back in 2007. He had never seen one before and the girls from "Death Proof" were there and were teasing him because the pecs on the action figure were now not quite so prominent on the real Kurt.

Just remember what ol’ Jack Burton does when the earth quakes, and the poison arrows fall from the sky, and the pillars of Heaven shake. Yeah, Jack Burton just looks that big ol’ storm right square in the eye and he says, “Give me your best shot, pal. I can take it.

Yessir, the check is in the mail.
You must log in or register to reply here. 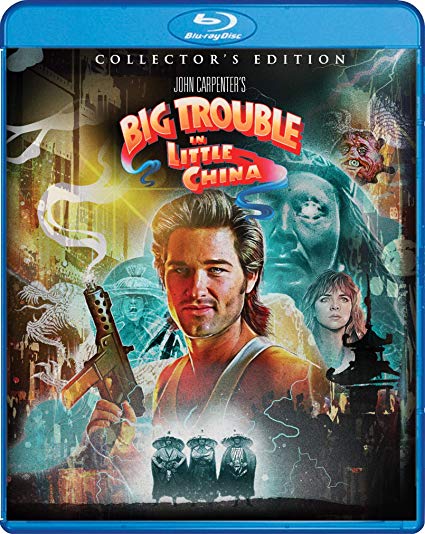