Forum List What's new Dark Style Change width
Log in Register
What's new Search
Menu
Log in
Register
Navigation
Install the app
More options
Dark Style
Close Menu
Posted on June 25, 2018 by Todd Erwin
You are using an out of date browser. It may not display this or other websites correctly.
You should upgrade or use an alternative browser.
Baymax is Back! 4 Stars

Disney Channel’s Big Hero 6: The Series – Back in Action brings the first seven episodes from the currently airing first season, including the 43-minute pilot movie, to DVD.

Big Hero 6: The Series, currently airing on the Disney Channel, picks up where the movie of the same name left off, as Hiro (Ryan Potter) begins classes at San Fransokyo Institute of Technology (SFIT) and re-assembles Baymax (Scott Adsit), the robotic healthcare companion. Young billionaire Fred (now voiced by Brooks Whelan) desperately wants to get the gang back together after their harrowing adventure stopping the city from getting sucked into a portal and eventually oblivion. Wasabi (now voiced by Khary Payton), Go Go (Jamie Chung), and Honey Lemon (Genesis Rodriguez) just want to continue their studies at SFIT and don’t want to use their inventions and secret identities to take down criminals. That is, until crime boss and bot-fight promoter Yama (Paul Briggs) is hired by Obake (Andrew Scott) to retrieve a mysterious paperweight from Professor Ganville’s (Jenifer Lewis) desk. The team is reunited and begins fighting crime in the city by night, attending school by day.

I thoroughly enjoyed Big Hero 6, Walt Disney Animation Studios’ animated feature from 2014, and had mixed feelings about a series, originally scheduled to run on Disney XD but moved to the younger-skewed and more family-friendly Disney Channel. The premiere double-episode, Baymax Returns, originally aired on Disney XD on November 20, 2017, and the series officially premiered on Disney Channel on June 9, 2018. The episodes have a similar feel to the feature film, despite using two-dimensional hand drawn-style animation that has a definite anime influence, and does sometimes have a very Saturday-morning stutter. The voice acting is superb, although it did take some getting used to the new voices for Wasabi and Fred. The good news is that with those two major exceptions, most of the original voice cast has returned, listed above and including Maya Rudolph as Aunt Cass, Alan Tudyk as Krei, Stan Lee as Fred’s Dad, and Daniel Henney as Tadashi (seen in a few flashbacks). Keep an ear open for Diedrich Bader as reporter Bluff Dunder, Andy Richter as Globby, Sean Giambrone as Richardson, Susan Sullivan as Fred’s Mom, and Gordon Ramsey as chef Bolton Gramercy, to name a few of the many voice cameos on the series.

Big Hero 6: The Series – Back in Action features the first seven episodes from the first season:

Big Hero 6: The Series to airs on the Disney Channel in 720p, and arrives on DVD in an acceptable 480p transfer. Colors are well-saturated with minimal bleeding. Detail is limited, but that likely due to the source material, as the episodes appear to also be lacking in fine detail when viewed on the Disney Channel. Contrast is acceptable, with deep blacks and minimal crushing. Compression artifacts are minimal and barely noticeable.

I was rather disappointed that the episodes appear on this DVD with only stereo Dolby Digital 2.0 tracks (encoded at 192 kbps), while the broadcasts are 5.1. Now, it is possible that the episodes were completed in stereo and upmixed to 5.1 when broadcast (a standard practice these days), as there does not appear to be any discrete surround effects when viewing on Disney Channel. That being said, the episodes on this DVD have a fairly narrow soundstage with minimal surround activity. Music and effects are spread across the front channels with occasional bleeding to the surrounds when Pro-Logic is enabled on the receiver. Dialogue is clear and understandable, directed mostly to the center channel. Bass response is adequate, about what one would expect from a stereo source.

The only special features on this disc are a collection of six bonus shorts that first appeared on Disney Channel’s YouTube channel on May 31, 2018.

Big Hero 6: The Series – Back in Action unfortunately only contains the first seven episodes of the first season (the series has already been renewed for a second season), so I’m guessing this is just supposed to be a taste of what is yet to air on Disney Channel this summer. 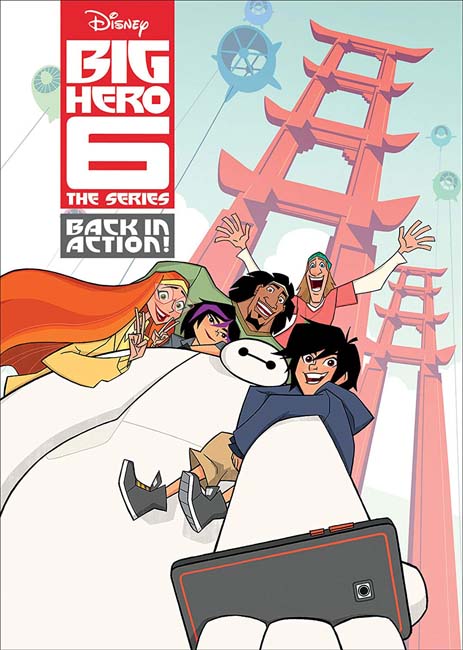