Following the runaway success of The Exorcist (1973), it seemed inevitable that filmmakers and studios would be very eager to cash in and ride that film’s coattails with their own takes on the movie. Perhaps the most successful and most infamous of these imitations was the Italian produced Beyond the Door (AKA Chi Sei?, The Devil Within Her and Diabolica), which followed its own path rather than copying The Exorcist. Previously released on DVD by Code Red, Arrow has picked up the film and given it the Limited Edition Blu-ray treatment.

In San Francisco, Jessica Barrett (Juliet Mills) is happily married to Robert (Gabriele Lavia), a music executive, with two children and a third on the way. However, Jessica starts having complications ranging from vomiting blood and mood swings to eating discarded banana peels left on the sidewalk. When these events start including supernatural events like Jessica’s head turning 180 degrees, it becomes clear to Robert that this is not a typical pregnancy; enter Dimitri (Richard Johnson), a man from Jessica’s past who may hold the key to Jessica’s disturbing and increasingly demonic behavior…

As the first of several imitations following The Exorcist, Beyond the Door may be the best known and remembered of the bunch. As it was the subject of a copyright infringement lawsuit filed by Warner Bros. – claiming unsuccessfully that the movie plagarized the visual content of their box office smash – the movie has gained notoriety almost immediately in that regard. That aside, the film goes on its own path, using only some passing similarities (the head turning, demonic voices and the pea soup projectile vomit being the most notable) to tell its story of demonic possession involving a pregnant woman (in stark contrast to the victim being a young girl as in The Exorcist). There’s no mention of exorcism or the Catholic Church here (likely sparing the film further litigation), which makes Beyond the Door unique in the subgenre of demonic possession and Italian imitations; in short, the movie is its own creature, standing out and likely the genesis point for anyone looking to understand the wave of the many imitations flooding the US theaters during the 1970’s. It’s competently well made, but very unlikely to win any awards for originality or subtlety in the process.

As the object of the unholy possession, Juliet Mills has one of the film’s two strongest performances; think of her part as basically Regan MacNeil of The Exorcist all grown up and you’ll get the point. Playing the mysterious Dimitri, Richard Johnson makes the most of his brief time in the film as the other most notable performance; he even has the film’s best line: “The child must be born!” Gabriele Lavia acquits himself well as Jessica’s bewildered husband while David Colin Jr. and Barbara Fiorini also make an impression as the Barrett children. Three other parts worth mentioning here are Nino Segurini and Elizabeth Turner as the doctor caught up in the supernatural happenings and his wife, respectively, and Robert Booth as the narrator in the film’s opening as well as providing the Mercedes McCambridge-like voice of the Devil; IMDB has listed Edmond Purdom making an uncredited appearance as the Devil, but I haven’t been able to find him.

Two versions of the movie are presented on this release, both in their original 1:85:1 aspect ratio: the uncut 108 minute English export version (titled The Devil Within Her) and the 99 minute US theatrical cut (exclusive to the limited edition). Both versions exhibit organic film grain, faithful representations of fine details and color palette, and minimal instances of problems like tears, scratches, and dirt present; in the US version there is some shifts in quality in terms to scenes unique to that version, but they are not very distracting. In short, both versions likely represent the best the movie will ever look on home video and represent an improvement over previous releases.

Both versions of the movie are presented with a 1.0 PCM track for this release, preserving their original mono soundtracks. On both versions, dialogue is strong and clear with a faithful representation of the original sound mix and Franco Micalizzi’s unique score given great fidelity as well. Problems like distortion, crackling, popping or hissing are nary in sight, making this likely the best both versions will ever sound on home video and another improvement over past releases.

Commentary by director Ovidio G. Assonitis and film historian Nathaniel Thompson, moderated by Lee Christian – Carried over from the Code Red DVD and Blu-ray, the trio talk about the movie and its production.

Commentary by actress Juliet Mills and Scott Spiegel, moderated by Lee Christian and Darren Gross – Also carried over from the Code Red DVD and Blu-ray, Mills shares her memories about he project as well as a few other details about the movie.

The Devil and Me (24:29) – In this newly filmed interview, director Ovidio G. Assonitis talks enthusiastically about the movie from its conception to filming and subsequent box office success and legal issues.

Barrett’s Hell (32:29) – This newly filmed interview has co-director and cinematographer Roberto D’Ettorre Piazzoli talking about his career as well as his association with Assonitis.

Beyond the Music (19:41) – Franco Micalizzi, in this new interview, talks about his career as well as the music he composed for this movie.

The Devil’s Face (10:26) – Camera operator Maurizio Maggi shares some of the experiences he had while making the movie in this new interview.

Motels and Devils (12:30) – In this newly conducted audio interview, actor Gabriele Lavia talks about his career and some of the details about his time working on the movie.

Beyond the Door: 35 Years Later (20:34) – Ported over from the Code Red DVD and Blu-ray, this archival featurette goes over the film and its production; featuring interviews with Assonitis, Mills, Richard Johnson and contributing writer Alex Rebar.

Richard Johnson: An Englishman in Italy (6:56) – This brief archival featurette, also ported over from the Code Red DVD and Blu-ray, focuses on Johnson’s time working in Italian movies.

Theatrical Trailers – There are four trailers presented here: the original US trailer (2:13), the alternate English trailer (3:11), the Italian trailer (3:43) and the Japanese trailer (1:06)

Italy Possessed: A Brief History of Exorcist Rip-Offs (1:28:15) – Produced for this release, this feature length documentary looks at the wave of horror movies – including Beyond the Door – produced in the wake of The Exorcist‘s success; among those interviewed – in both newly filmed and archival audio interviews – include directors Ovidio G. Assonitis, Sergio Martino, Alberto De Martino, Pupi Avati, Marcello Avallone, and Luigi Cozzi, just to name a few.

Gabriele Lavia: Bargain with the Devil (10:44) – Carried over from the Code Red Blu-ray, Lavia shares some additional details about the movie not covered in the audio interview.

Extended interview with Juliet Mills (13:55) – Carried over from the Code Red DVD and Blu-ray, the Mills interview contains additional details not mentioned in the 35 Years Later featurette.

A box office success upon initial release despite legal troubles and poor reviews from critics, Beyond the Door has continued to have a long life as a cult favorite in the horror genre. Arrow has likely produced the definitive edition of the movie on home video, with two versions of the movie – both with great marks in audio and picture quality – and over 2 hours worth of new and legacy special features. Highly recommended for fans of cult and horror cinema. 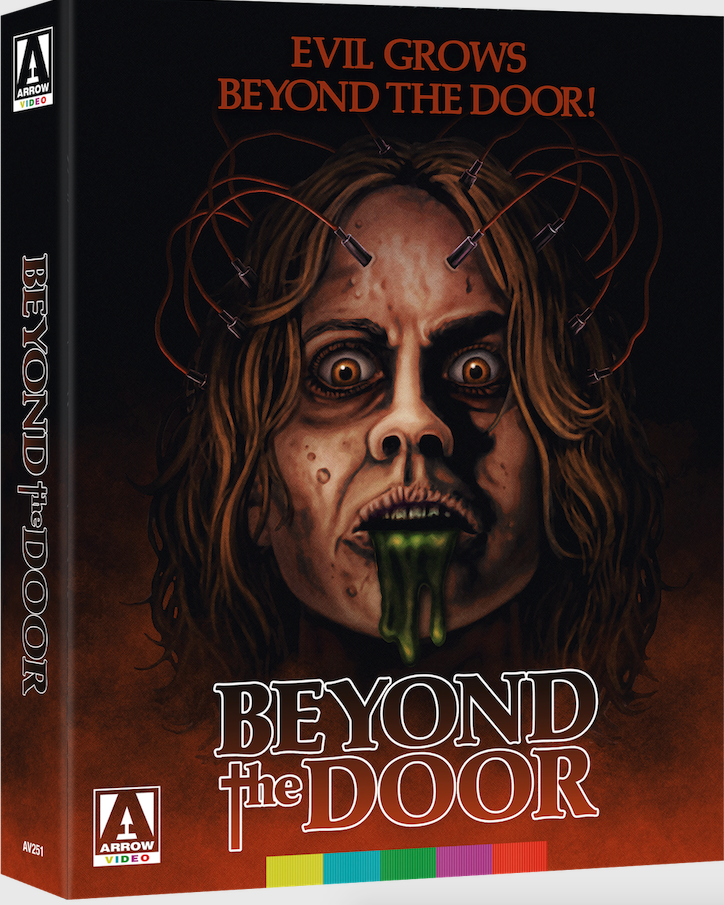