Forum List What's new Dark Style Change width
Log in Register
What's new Search
Menu
Log in
Register
Navigation
Install the app
More options
Dark Style
Close Menu
Posted on November 30, 2020 by Neil Middlemiss
You are using an out of date browser. It may not display this or other websites correctly.
You should upgrade or use an alternative browser.

“Disturbing the peace? I got thrown out of a window! What’s the f*@#ing charge for getting pushed out of a moving car, huh? Jaywalking?”

Beverly Hills Cop begins in the back of a semi-truck, in a container filled with federally stamped but stolen cigarettes in one of Detroit’s many grimy alleys. When a squad car interrupts the negotiations and a carnage-filled chase ensues with a good portion of the motor-city’s automotive product being crushed by the indiscriminate steering of the crook at the wheel of the truck (before it comes to a crashing halt), we soon realize that what we’ve seen is a failed attempt at a one-man undercover sting. Soon, the undercover detective, Axel Foley, is dutifully chewed out by his less than impressed or forgiving captain and clocks out for the night. When an old friend makes an unexpected visit, Foley enjoys an evening out on the town, but when he and his friend–visiting from his new job in California–return to Foley’s apartment, his friend is executed and Foley knocked unconscious. Before long, Foley begins to investigate by driving his beat-up car to Beverly Hills, where his friend was working, and soon finds himself on the radar of both a criminal organization and a by-the-book couple of detectives, Rosewood and Taggart, assigned by the Beverly Hills lieutenant to make sure he behaves – which of course he does not.

Beverly Hills Cop’s journey to the theaters is perhaps more storied than one might suspect. Sylvester Stallone is one of the many names attached to star at one time or another. His vision for the film imagined a grittier tale with a ‘man on a mission’ body count to match (that film would become Cobra), and Mickey Rourke was originally considered for the part but left when the project continued to languish in pre-production (co-story creator Danilo Bach had turned in his draft to the studio in ’77). Frequent script changes and uncertainty in how to make the film work forced its journey to take the long road to fruition. Once Eddie Murphy was on board, the rushed script and a still ill-prepared production seemed to find its groove. With a terrific comedy mind, Murphy’s improvisational proclivities set scenes ablaze, creating another type of production issue – people unable to keep a straight face forcing retakes. Still, that’s a better problem to have than predictable dialogue and well-worn joked that lack verve and energy. And that is exactly what Murphy brings to the table. An unrelenting wise-crack machine with a naughty streak and a disregard for authority, all done with a wink and a smile, give the film two well-balanced tones that made it universally loved. On one level, it’s an revenge story as a detective seeks to bring down vicious criminals, and on the other, a playful, approachable comedy about a scruffy, likeable cop from the hard lines of Detroit who does everything he can to make the sunny, wealthy area of California concede to his style and approach. Who can forget his banter with Serge (Bronson Pinchot), the art gallery employee who nearly steals his scenes as he tries to wrap his thick European accent around Foley’s fist name (Ahmed, Ackmed, Ack…), or how he takes in stride, with untethered sass, the verbal lashings he gets from an his acerbic Inspector Todd (Gilbert Hill), or how he ingeniously stops Taggart and Rosewood from tailing him with fruit in the tailpipe of their car, or gets a suite at a fine hotel by pretending to be a Rolling Stone reporter interviewing Michael Jackson – all classic stuff that helped make Cop a smash hit.

Beverly Hills Cop remains a highlight in Eddie Murphy’s career. Having starred in 48hrs, the classic Trading Places, and his legendary standup, Delirious prior to his casting (as well as the hiccup Best Defense), this film represents the first unequivocal career footstep of a bona fide comedy movie star. Martin Brest provides adequate direction, and the screenplay by Daniel Petrie, Jr., was undoubtedly saved by Murphy’s charisma and comedic inclinations, and the co-star performances, along with Harold Faltermeyer’s unforgettable synth score, helped cement the box office win. The casting of the goofy Judge Reinhold as Rosewood and the gruff, mildly rotund John Ashton as Taggart provided Murphy with a clever dynamic of characters to play off, sealing the ripe mixture and delivering one the funniest films of the 1980s (you can check out my interview with the wonderful John Ashton talking BHC here).

Beverly Hills Cop finally makes its way onto Ultra High Definition disc (after being available in streaming 4K for a while) and the results are spectacular. Excellent detail, fine layer of film grain, colors that pop and a bright, balanced image are highlights. The lush greens of Beverly Hills Palm trees, the blue window frames of Victor Maitland’s home, heck, even the Foley’s blue jeans are a color showcase here. This is a delightful picture, aided nicely by some deft Dolby Vision (HDR) grading, and is absolutely the best this film has ever looked for home viewing. Exceptional.

Beverly Hills Cop comes with the same English 5.1 DTS-HD Master Audio from the previous Blu-ray release. The first test for it comes during the opening chase sequence as an entire precincts squad car fleet vigorously pursues a truck carrying stolen cigarettes while the most famous of song of the film provides cover for the carnage – Glenn Frey’s The Heat Is On, and the results of this test are representative of the level of success for the entire audio. As the song plays it is apparent that it is clear, free of any real audio issues – no hiss, drop-outs, or audio fluctuations, but it isn’t particularly dynamic. Certainly, there is plenty of bass (perhaps more than you might remember), and even a little rumble courtesy of the LFE, but it all seems a tad flat. Dialogue is free of issues out of the center channel, and there’s good spread of sound effects, guns shots and carnage across the front, but this audio is a bit flat.

Available on the 4k Disc

Commentary by Martin Brest: The commentary, recorded for the DVD release back in 2002, provides a relatively interesting look back at shooting the film, though adding Eddie Murphy to the commentary would have been gold.

Behind the Scenes – 1984 Interviews: Short interview snippets with Eddie Murphy, plus comments from director Martin Brest.

BHC Mixtape ‘84. Selectable scenes from the film where the popular songs from the soundtrack were used.

Available on the Blu-ray Disc in addition to the above

Location Map: Find filming/scene locations and learn a little about each (7 in total)

Beverly Hills Cop – The Phenomenon Begins (29:12): A relatively good look at the creation of the original film and the sequels it spawned with good perspective provided on the storied road to production which, as I noted in my review, included various different actors (and associated approaches) for the film.

A Glimpse Inside the Casting Process (9:35): Margery Simkin – casting director – discusses casting for the film.

The Music of Beverly Hills Cop (7:50): Fun by brief look at the hard-to-forget score for the film (though I will personally always prefer Faltermeyer’s score for Fletch)

Star Trek I: The Motion Picture - The Director's Edition

Can not wait for the follow up to be available on 4K blu-ray! 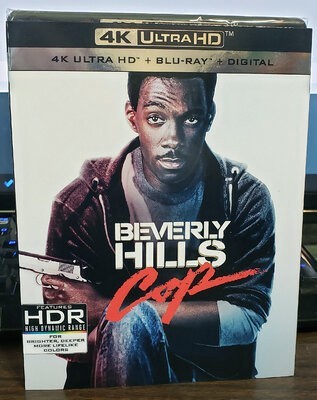 Just watched it. I thought it looked really good in some places, and a little soft in others (not very sharp contrasts). Likely due to film stock, I suppose.
You must log in or register to reply here.