A sociological horror film in the same spirit as Lord of the Flies only this time with adults reduced to savage butchers, Greg McLean’s The Belko Experiment has only a few outright shocks but is long on thrills as we witness a live action human shooting gallery with man at his most primal: kill or be killed.

A sociological horror film in the same spirit as Lord of the Flies only this time with adults reduced to savage butchers, Greg McLean’s The Belko Experiment has only a few outright shocks but is long on thrills as we witness a live action human shooting gallery with man at his most primal: kill or be killed. It’s loud and graphic and doesn’t really go anywhere previous horror films haven’t gone with an us vs. them mentality. The butchery may be on a grander scale here, but that’s its only claim to fame.

[Spoilers lie ahead in the next three paragraphs for those who haven’t already seen the film.]

The eighty employees of Bogota, Colombia’s Belko Industries isolated office complex are shocked one morning to hear over the intercom system that unless two of the employees are killed within the next half hour, dire consequences will rain down upon assorted, unnamed members of the work staff. Most of the staff consider it a tasteless joke or some kind of mean-spirited psychological test, but after a half hour, four employees’ heads explode. It seems that upon employment, workers were required to get chip implants in their heads for identification purposes, and now those chips put the workers at the mercy of the anonymous voice pulling the strings. Round two requires thirty deaths to be recorded in four hours, and the staff finds themselves broken into two camps: those pacifists who want to work together to find an escape led by junior executive Mike Milch (John Gallagher Jr.) and four chief executives who want to do as the voice commands and select thirty to be sacrificed led by the company COO Barry Norris (Tony Goldwyn) who reasons thirty deaths are a small price to pay for the majority of the workers getting to live. Once the martial group gets their hands on automatic weapons from the armory, survival for the others becomes a combination of luck and skillful maneuvering.

James Gunn’s screenplay maps out a horrifically sadistic scenario that might claim to be an intellectually stimulating sociological experiment but really stacks the deck in favor of the mentally maladjusted, heartless, and insecure among the office employees. There is also one specific fly in the ointment: the one character who quickly digs out the chip from his head leaving him free from the instant death the puppetmaster can inflict on all of the others and allowing him the luxury of strategizing without fear from above. Knowing that such a brutal experiment can’t possibly allow any survivors guarantees him to be able to control his own destiny more than any of the other characters if only he can stay out of harm’s way from the desperate men who are controlling all of the weapons. Director Greg McLean makes certain that the initial deaths are quite jarringly shocking coming out of nowhere (are there snipers in the building, we wonder?) and continually keeps the action hopping all around the building as various pockets of people scramble for safety, try in vain to negotiate their lives with the armed men, or succumb to their survival instincts and grab whatever is handy for a protective weapon. With the kind of the narrative this is, it’s impossible for more than a very few people to develop any kind of character we can either root for or against, and many folks meet their maker without our even getting to know their names. That all but guarantees that the ones who survive the longest are the actors with whom we’re most familiar (there is one notable exception to that). The movie’s final image is meant to be a haunting surprise reveal but doesn’t really have the gut punch impact it’s meant to have.

John Gallagher Jr. as the rational pacifist Mike and Tony Goldwyn as the brutally pragmatic Norris are the polar opposite characters that everything points toward their coming down to a final face-off. A few of the others do manage to etch memorable characters amid the slaughter: Adria Arjona as Mike’s girl friend Leandra, John C. McGinley as the leering office letch Wendell Dukes, Owain Yeoman as the executive Terry Winter who lacks killer instinct, David Dastmalchian as pothead Lonny (the cheap comic relief of the otherwise tense film), Michael Rooker as the kindly custodian, and Rusty Schwimmer as supportive office worker Peggy. Gregg Henry is finally revealed as the voice over the intercom.

The film’s 2.40:1 theatrical aspect ratio is faithfully rendered in this 1080p transfer using the AVC codec. Sharpness is all would one wish and while the violence quotient is high, there are only a few instances of up close and personal gore pushed into the viewer’s face. Color is nicely rendered, and all that red blood reads very realistically, but its saturation levels are fully under control. Contrast has also been expertly applied for a first-rate picture. The movie has been divided into 28 chapters.

The DTS-HD Master Audio 5.1 sound mix does exactly what it’s supposed to do to ratchet up the tension on the soundtrack. Dialogue has been placed in the center channel, but various screams and other atmospheric effects (gunshots in the distance) get nicely spread through the fronts and rears. Tyler Bates’ driving background score likewise gets the full surround treatment. The LFE channel likewise gets some good use when armored panels go up completely surrounding the building in the early going.

Lee Hardcastle’s Survival Tips (2:37, HD): four Claymation promo trailers for The Belko Experiment which can be watched in montage or separately.

Deleted Scenes (5:19, HD): eight scenes can only be viewed in montage.

Gallery: a dozen behind-the-scenes color stills made during production.

Audaciously violent but curiously unsatisfying, The Belko Experiment is a horror thriller pitting man against man in the basest possible scenario for survival. The audio and video quality are outstanding for those interesting in giving this exercise in terror a spin.

Watched The Belko Experiment a while back. Extremely disturbing & horrific - especially because I can easily see something like this actually happening; I also feel that if something like this were to happen, the people involved in "the experiment" would probably act very similar to the way the characters did in the film.

Though the film had a lot of gruesome violence, I didn't feel that any of it was gratuitous.

The government gets more & more control of us each year, and we do know there have been psychological-type experiments - so, again, this is not that far fetched whatsoever.

Also, the tracking chips had been implanted in people in the film (at the start of their employment in The Belko Corporation) have occurred in real-life - again, very scary: 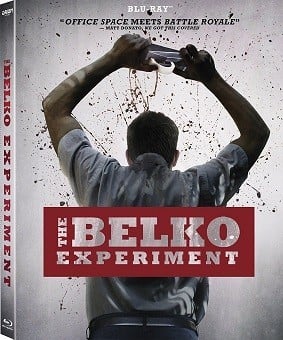