Mason Skiles (Jon Hamm) is a US diplomat stationed in Beirut with his wife, Nadia (Leila Bekhti). During a dinner party, Skiles’ friend and CIA operative Cal Riley (Mark Pellegrino) arrives to take Karim, a young boy Skiles and his wife have taken in as a soon-to-be adopted son, into custody to be questioned about the whereabouts of his brother, Rami, a suspect in the terrorist attack at the 1972 Munich Olympics. Rami shows up with his group of radicals, forcefully taking Karim and killing Nadia during the attack.

Ten years later, Skiles is struggling to survive back in the US, trying to keep is independent arbitration business afloat. After a rather lengthy and heated negotiation, Skiles stops for some drinks at the local bar, where he is met by an old client of his who has been sent by Washington D.C. to hand Skiles money and a passport to go back to Beirut to give a speech at a local university. As it turns out, that’s only a cover story. Cal was kidnapped in public on the streets of Beirut, and his kidnappers have demanded to only negotiate with Skiles, who winds up being the middle man between the kidnappers and US officials Donald Gaines (an unrecognizable Dean Norris), Gary Ruzak (Shea Wigham), Frank Whalen (Larry Pine) and CIA operative Sandy Crowder (Rosamund Pike). We soon learn that the kidnapper is the now grown up Karim (Idir Chender), and he wants his brother Rami in exchange for Cal. And that becomes the heart of the mystery of Beirut, as Skiles and Sandy try to figure out who has Rami in custody and how to get him released before time runs out and Cal is either killed or sold to the highest bidder for the intelligence information he has knowledge of.

Director Brad Anderson and writer Tony Gilroy have created an effective period-piece thriller, and both Hamm and Pike’s performances help to elevate the material from sinking into made-for-TV territory.

Beirut was captured on Arri Alexa Mini and XT cameras and completed as a 2K digital intermediate (according to IMDB). Universal’s AVC-encoded1080p transfer, retaining the film’s intended 2.40:1 aspect ratio, is kind of a mixed bag with most of its flaws likely due to the source material. Much of the film appears to have been shot hand-held, and the bombed-out areas of what is supposed to pass as 1982 Beirut (the movie was actually shot in Morocco) are often dull with greys and browns making up most of the color pallet. That being said, colors are often natural and consistent, with detail is quite good showing off the textures of the battered city and Hamm’s hung-over beard stubble. Contrast is handled well, with deep blacks that display little to no crushing. There are a few digital composite shots that, due to compression artifacts and other noise, rear their ugly head, but those are minimal.

The DTS-HD Master Audio 5.1 track is a serviceable one, providing some nice LFE punch to its few explosions and a well-balanced and wide soundstage with just a few noticeable discrete surround effects. Dialogue is clear and understandable (even though some of the heavy accents have burnt-in subtitles).

Sandy Crowder (1080p; 0:51): A way too brief look at Rosamund Pike’s character that is over before it ever gets a chance to begin.

DVD Copy: The movie in 480p with Dolby Digital 5.1 audio, plus the two special features listed above.

Digital Copy: An insert contains a code to redeem a digital copy thru Movies Anywhere.

Beirut is an effective thriller with good performances. Video and Audio are very good, but the extras are a major disappointment.

Thanks for the review, Todd. I saw the trailer for this once or twice and thought it looked interesting but missed it during its really brief theatrical run. Sounds like it would be worth watching when it pops up on Netflix or something, but I don't think I'll blind purchase it.
Reactions: Todd Erwin
You must log in or register to reply here.
Share:
Facebook Twitter Reddit Pinterest Tumblr WhatsApp Email Link 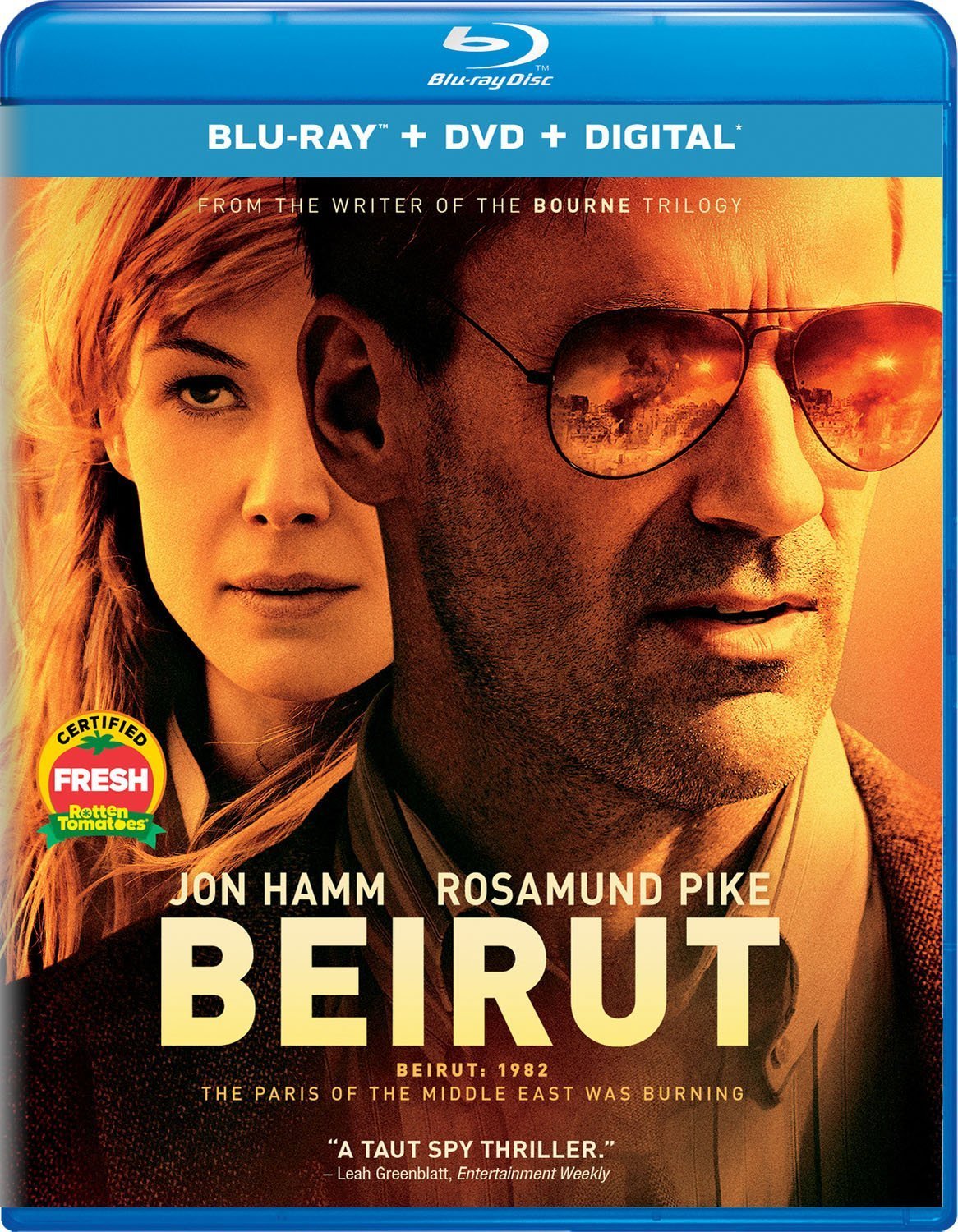