A methodically thoughtful but altogether too plodding attempt at a vengeance thriller, Fred Zinnemann’s Behold a Pale Horse doesn’t really give the audience much of what it’s waiting for.

A methodically thoughtful but altogether too plodding attempt at a vengeance thriller, Fred Zinnemann’s Behold a Pale Horse doesn’t really give the audience much of what it’s waiting for. We’re primed for a dynamic faceoff between top-billed stars Gregory Peck and Anthony Quinn that never quite materializes, and what we do get in the way of climactic action is muted and disappointing. It seems to be a tragic missed opportunity.

At the end of the Spanish Civil War, soldier Manuel Artiguez (Gregory Peck) is exiled to France as part of the defeated forces. After twenty years there, he learns that his mother (Mildred Dunnock) is dying and plans to return to Spain to see her. However, Viñolas (Anthony Quinn), a police officer with a vendetta against Manuel who has managed to elude his capture for twenty years, prepares forces to trap Artiguez. Father Francisco (Omar Sharif), who was at the death bed of Manuel’s mother, tries to advise Artiguez not to travel to Spain, but Artiguez ultimately chooses to leave for a fateful confrontation with Viñolas.

Based on the novel Killing a Mouse on Sunday by Oscar-winning screenwriter Emeric Pressburger, the screenplay by Pulitzer Prize-winning playwright J.P. Miller makes a long, slow, and only occasionally eventful path toward the final encounter between the two adversaries. We’re treated to a great deal of local color: children playing soccer in the street, the former freedom fighter smoking endless cigarettes while plotting his next move, a trip to Lourdes to find a priest, the police chief enjoying an afternoon delight with his mistress (Daniela Rocca) while his consumptive wife (Rosalie Crutchley) waits alone at home. Director Fred Zinnemann adds some interest to the proceedings by shooting the major characters often in extreme close-up so that we can almost see the wheels turning in their heads as they plot their next move. He has one very stylish shot of a soccer ball being tossed from an upstairs window and bounding down the street below (symbolic of Peck’s Manuel likewise heading down the street alone with no back-up and no real plan), and a visit to a church by Chief Viñolas asking God for a win after two decades of defeats at the hands of his enemy is movingly shot.

With a cigarette perpetually dangling from his lips, Gregory Peck’s Manuel Artiguez is a gruff, frustrated, and cantankerous freedom fighter. We’re told he had enjoyed dozens of victories eluding his Spanish enemies in the twenty years since the civil war ended, but it might have been nice to actually see one in action to enliven the film’s fairly tedious first half. Anthony Quinn’s arrogant police chief masks his insecurity with a face of aggressive bravado, but he’s absent for a great portion of the film’s central action, so his impact is somewhat neutralized. Omar Sharif’s kind and soft-spoken Father Francisco is in effective, stark contrast to the fierce desert prince he played so well in Lawrence of Arabia. Marietto Angeletti has some very effective moments as the street boy Paco who urges Manuel to kill the cruel Viñolas. As Viñolas’ second-in-command, Christian Marquand’s Lieutenant Zaganar is excellent while Rosalie Crutchley and Daniela Rocca are both quite effective as the women in Viñolas’ life. Mildred Dunnock must act more with her eyes than her voice as the weak, near-death Pilar, but her every moment is special.

The film’s theatrical aspect ratio of 1.85:1 is faithfully rendered in 1080p using the AVC codec. Though the vintage civil war footage used at the beginning of the film is in rough condition and some early scenes away from that contain a scratch or two, the transfer’s main weakness is its darkness. Details get swallowed up in shadows in darker scenes due to the timing of the transfer, but black levels are certainly deep and at its best, the image can be pretty striking. The movie has been divided into 24 chapters.

The DTS-HD Master Audio 2.0 mono sound mix is very typical of its era. While the low end doesn’t seem to have much power, overall the blending of the dialogue, sound effects, and Maurice Jarre’s score is very effective. There are also no problems with age-related artifacts like hiss, crackle, flutter, and pops.

Fred Zinnemann’s Behold a Pale Horse didn’t resonate with audiences of its day; it would take his next project, A Man for All Seasons, for him to find a topic more in tune with the general audience’s interests. Still, the three top stars in this give memorable performances despite the limiting subject matter. There are only 3,000 copies of this Blu-ray available. Those interested in purchasing it should go to either www.twilighttimemovies.com or www.screenarchives.com to see if product is still in stock. Information about the movie can also be found via Facebook at www.facebook.com/twilighttimemovies. 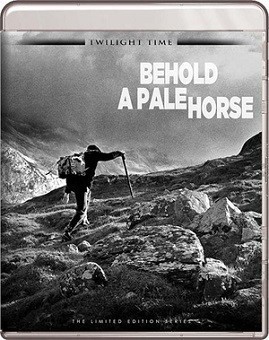