On its own, Sofia Coppola’s The Beguiled is an adequate telling of Thomas P. Cullinan’s Gothic melodrama, but it really seems weighed down by the arty trappings and a shift not only in point of view but an attempt to minimize the very excesses that give the story its life and flavor.

Sofia Coppola has done a stylish and stylized remake of the 1971 film The Beguiled, but there seems little point to it. She hasn’t ratcheted up the melodramatic romance and jealousy to maximize that aspect of the story nor has she delved into the potential terrors of this Gothic tale as seemingly helpless women may come under the control of a renegade soldier but instead has used the story to craft an emotionally muffled and often unsatisfying film with lots of period trappings but very little flavor for the genre. Stick with Don Siegel’s 1971 original to get the most out of this tragic saga.

In Civil War Virginia about year before the end of hostilities between the North and South, young Amy (Oona Laurence), one of five remaining students at Miss Farnsworth’s Seminary for Young Ladies, finds badly wounded Union soldier Corporal John McBurney (Colin Farrell) in a forest while picking mushrooms and brings him back to her school. Headmistress Miss Martha Farnsworth (Nicole Kidman) is torn whether to turn him over immediately to Confederate troops stationed nearby or nurse him back to health before surrendering him, but she’s persuaded by her adult assistant Miss Edwina (Kirsten Dunst) and the others to help him recover first before turning him over. With a man’s presence in the house after such a long time, it doesn’t take long for the women to begin vying for his attention, foremost among them the oldest of the students Alicia (Elle Fanning). Clever McBurney, not particularly anxious to rejoin the fighting, decides to curry favor of the various ladies in the house while doing what he can to clean up the overgrown garden in order to prolong his stay, but as emotions begin to run high among the women most intrigued by the lure of his sexuality, it’s inevitable that someone’s heart is going to get broken.

Based on the novel The Painted Devil by Thomas P. Cullinan and the screenplay of the 1971 movie by Albert Maltz and Irene Kamp, director Sofia Coppola’s screenplay turns the focus of the movie from the principal male character to the bevy of females conflicted in their emotions by this alluring but potentially dangerous stranger. The 1971 film benefitted by having one of the most magnetic star presences in films of the era – Clint Eastwood at the height of his youthful allure – forcefully driving the story forward. None of the females now at the center of the story have that kind of overwhelming personality, and consequently, the film ambles along without making all of the dynamic dramatic points which would intensify the film’s disquieting and potentially precarious mood. Even more damaging to its tone, Coppola films most of the movie in candle-lit interiors or low lit early morning or dusky moments where it’s difficult to read emotions etched on the faces of the characters in question. Sun rays flashing through the tree-lined grounds (trees draped in Spanish moss, incidentally, which is much more indigenous to the Louisiana locations where it was filmed rather than the Virginia plantation where it’s set) make quite a visual impact on occasion, but they don’t allow us often to see details in the faces of the performers who are undergoing the rigors of the story itself.

Colin Farrell does what he can with the reduced part of Corporal McBurney, but the screenplay doesn’t really give him the opportunity to register the calculating insidiousness of the character or allow us to get inside his head (is he a Union deserter, a coward, an innocent, or a combination of all three) to see who he truly is. The three principal women drawn to McBurney played by Nicole Kidman, Kirsten Dunst, and Elle Fanning each have their moments to etch notable characteristics for the people they’re playing, but none of them get the juicy emotional character scenes that Geraldine Page, Elizabeth Hartman, and Darleen Carr got in the 1971 version (Dunst comes closest expressing her somewhat desperate desire to leave the school; Kidman’s emotions are too reined in and tight to register with finality). The younger girls, particularly Oona Laurence as the overly friendly Amy and Angourie Rice as the musical Jane, make solid impressions.

For some reason, director Sofia Coppola has chosen to frame this film at 1.66:1, and it’s presented in 1080p resolution using the AVC codec. Unless one can arrange to watch this in a completely darkened environment and has a panel or projection system that can handle the low light levels and shadow detail requirements to bring out facets of the costumes, production design, and character faces of the actors, this is going to be an up and down viewing experience. Filters soften details in both close-ups and long shots, and colors are never vibrant but in fact seem a bit on the dull side. Black levels, though, aren’t truly black but often a dark, dark brown. The movie has been divided into 20 chapters.

The DTS-HD Master Audio 5.1 sound mix is mostly subdued but can certainly have its effective moments. The Civil War fighting in the distance is often heard rumbling in the surround channels (usually directed toward the front soundstage), and occasional wind and forest sounds likewise get the surround treatment. So does the very spare score by Phoenix that becomes more prominent later in the movie. Dialogue has been excellently recorded and has been placed in the center channel.

A Shift in Perspective (6:53, HD): writer-director Sofia Coppola, producer Youree Henley, and actors Colin Farrell, Kristin Dunst, Elle Fanning, Oona Laurence, Angourie Rice, and Addison Riecke discuss the story and shift in focus from the male protagonist to the women caring for him, and the actors have great words of praise for the director and for fellow actors Nicole Kidman and Kristin Dunst.

On its own, Sofia Coppola’s The Beguiled is an adequate telling of Thomas P. Cullinan’s Gothic melodrama, but it really seems weighed down by the arty trappings and a shift not only in point of view but an attempt to minimize the very excesses that give the story its life and flavor. 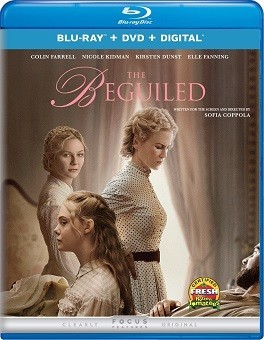