Entertaining study of Georgian manners gets a beautiful restoration. 3.5 Stars

William Makepeace Thackeray’s 19th century social satire Vanity Fair was adapted for the screen several times before the landmark 1935 three-color Technicolor production of Becky Sharp premiered. This film, directed by Rouben Mamoulian based on Langdon Mitchell’s turn-of-the-century stage version of the novel, proves in this 4K restoration Blu-ray transfer to be likely the best Becky Sharp will ever look after decades of transferals and neglect of its elements after its initially unsuccessful theatrical release. Colors are now much more accurate and balanced, and director Mamoulian’s gifts of working brilliantly in Technicolor obviously were given birth to in this landmark effort. If the movie itself isn’t the definitive version of the novel that one might wish, it does offer an enjoyable gander at the gist of its plot and features a wealth of familiar actors of the era playing in high style.

Vixenish, social climbing Becky Sharp (Miriam Hopkins), the polar opposite of her best friend from school Amelia Sedley (Frances Dee), will do anything to achieve wealth and social position and is never above using her feminine charms to lure men into compromising positions who must then pay off to retain their own society standing. From the lowly position of a governess to a motley band of Crawley children to becoming the companion of the wealthy Lady Crawley (Alison Skipworth), Becky maneuvers into a socially prominent marriage to Rawdon Crawley (Alan Mowbray) though the couple runs up insurmountable debts that Becky ignores, confident they will be forgotten when her husband and his regiment are called up to battle the escaped Napoleon at Waterloo. Becky uses her allure and her vivid imagination whenever she finds herself trapped by outside forces or her own machinations. But even her husband, wise to her flirtatious ways and knowing they’re in desperate need of money, finds her having gone too far when she tries her wiles on the wealthy, imposing Marquis of Steyne (Cedric Hardwicke).

Francis Edward Faragoh’s screenplay adapted from the dramatic stage rendition of the novel really only offers a Cliff’s Notes version of Thackeray’s satiric masterpiece. The contrast between the scheming Becky and the once-innocent Amelia who becomes more worldly as Becky’s various schemes drag her family into the midst of them, so prominent in the book, becomes almost an afterthought in the film with Amelia’s comings and goings in the story of little consequence in the movie’s underlying narrative. At the center we have a scheming, amoral woman, never above lying or blackmail to achieve her aims (in some ways like Scarlett O’Hara though Scarlett’s selfishness and scheming were tempered with a heart and conscience while Becky never displays either) and one who surprisingly in this period after the Production Code took over pays very little for her various misdemeanors with even a determination to head to India to start her whole adventure over again with a new set of people to be fleeced. Director Rouben Mamoulian works wonders with light and shadows here (most effective when the soldiers and the populace flee the ball at the approach of Napoleon), and his expertise with the hulking Technicolor camera in this first use in a feature film is somewhat miraculous as we witness that blazingly colorful ballroom scene with couples whirling in almost dizzying succession to a lively waltz. He also balances colors beautifully throughout, displaying with both light, shadow, and color, the brilliance he’d later bring to Technicolor marvels like Blood and Sand and Summer Holiday.

Miriam Hopkins may be slightly too old (33 at the time of filming) and too Southern to be the ideal Becky Sharp, but she flutters and masquerades as best she can and has moments of real inspiration though much of her flirtatious manner seems decidedly phony enough to not pass muster. Despite second billing, Frances Dee is appealing as naïve Amelia even if we don’t see nearly as much of her as we should have to set up the ironies of the two most prominent female characters in the story. Nigel Bruce is terrifically amusing and fun as the befuddled brother to Amelia, and Alan Mowbray is fine as Becky’s adored husband. Cedric Hardwicke makes a striking impression of imperiousness as the Marquis of Steyne even if he could have done with one or two more compelling scenes. G. P. Huntley Jr. doesn’t have much presence as Amelia’s dastardly husband George, and Colin Tapley as William Dobbin, the man who adores Amelia for such a long time, gets rather lost in the shuffle. Wonderful character actresses Billie Burke, Alison Skipworth, and Elspeth Dudgeon only get one scene apiece to strike familiar chords as the haughty Lady Bareacres, the demanding Lady Crawley, and the fussy headmistress Miss Pinkerton.

The film’s original theatrical aspect ratio of 1.37:1 is faithfully presented in this 1080p transfer using the AVC codec. Apart from a small bit of spotting, age-related artifacts aren’t a problem. The richness and solidity of the Technicolor varies, of course, depending on which reel one is viewing at any given time, but at its best (which is at least 70% of the movie), it’s very striking and most appealing. The missing blue element in the fourth reel is subtly dealt with without undue notice though the film’s last ten minutes are indeed very rocky as the color registration and clarity seesaws very wildly. The movie has been divided into 8 chapters.

The DTS-HD Master Audio 2.0 mono sound mix has restored the original sound design with vivid clarity. No age related problems with hiss, pops, hum, or crackle are present, and the film’s dialogue, music elements, and sound effects blend seamlessly into a single track.

Audio Commentary: film historian Jack Theakston has the herculean task of providing not only background information on the principal actors, producers, and director but also offers a history of Technicolor and discusses the problems encountered in restoring this maligned film to close to its original Technicolor brilliance. He does a fine job.

Kino Studio Classic Trailers: Nothing Sacred, The Adventures of Tom Sawyer, Intermezzo, The Young in Heart, Made for Each Other, Desert Fury, Duel in the Sun.

What a gift to have cinema’s first full Technicolor feature, Becky Sharp, restored to its best possible quality! While the film likely won’t please purists of the original novel, Becky Sharp is still a lively and entertaining eighty-four minutes. 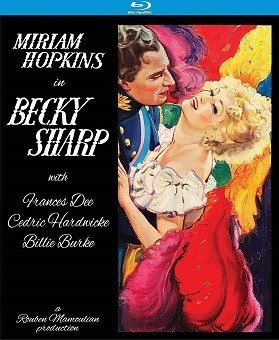