From its opening song to its closing waltz, Disney’s Beauty and the Beast is a perfect piece of screen entertainment: a charming (though definitely not cloying), stylish, and interesting version of Mme. LePrince de Beaumont’s 18th century fairy tale.

From its opening song to its closing waltz, Disney’s Beauty and the Beast is a perfect piece of screen entertainment: a charming (though definitely not cloying), stylish, and interesting version of Mme. LePrince de Beaumont’s 18th century fairy tale. It may not have the darkness and bittersweet melancholy of Jean Cocteau’s 1946 live-action version (made in Paris when the war debt made filmmaking in France an ordeal comparable to Reconstruction), but it’s nevertheless a stunning and altogether delightful motion picture achievement. It’s saying something when an animated cartoon contains all of the elements of a successful film in perfect proportion, something that very few live action films today seem able to manage: Beauty and the Beast is alive with spectacle, comedy, and romance, its music is abounding with color, spirit, insight, humor, and warmth, and it’s as finely and precisely acted and directed a movie as any live action feature. Beauty and the Beast is, quite frankly, one of the greatest animated films ever made. The film’s 25th anniversary is being celebrated in this new Blu-ray release of the movie with a few new bonus features that fans may find interesting but with the masterful film itself, as it should be, of primary importance.

The famous old story is well-known: how an enchanted prince cursed to the ugly shell of a beast must find a beautiful maiden to love him for his inner goodness in order for the spell to lift. In Cocteau’s version, Beauty is drawn toward the town’s most handsome man Gaston and must come to love the Beast in spite of her prior feelings. In this Disney account, Beauty is repelled by Gaston and flees from his egotistical advances. Her attraction to the Beast has fewer obstacles for her to overcome. As in all the most memorable Disney animated tales, the character voices make the movie. Here, they are without exception wonderful. Paige O’Hara bountifully performs the role of Belle, and her stirring singing makes her musical numbers all highlights. Robby Benson’s voice has been electronically deepened to add doubly to his fierceness as the Beast, but it softens as his feelings for Belle blossom into love. And Richard White’s munificent bass-baritone provides Gaston with the boastful swagger and the profound musicality to pull off the handsome rogue to utter perfection.

Disney’s animated films always contain secondary characters as delicious and exceptionally interesting as the leads (sometimes even more memorable), and three of them in this movie prove unforgettable. Angela Lansbury beats all comers as the no nonsense Mrs. Potts, the talking teapot, who serenades the lovers with the score’s most exquisite number, the title song sung as the two fall in love. Jerry Orbach’s spunky French candelabra Lumiere certainly has the film’s best lines while David Ogden Stiers is full of officious self-importance as the talking clock Cogsworth. Jo Anne Worley has a cute moment or two as the chatty Wardrobe as well.

The earlier reference to the film’s haunting title song is not a slight to the remainder of this magnificent musical score by Alan Menken and the late Howard Ashman. In much the manner of a Broadway musical, there are introductory songs to get exposition out of the way quickly through song and dance (the opening ” Belle”), character numbers to fill in chinks of characterization (Gaston’s egocentric self-tribute, “Something Strange” between Belle and the Beast), and marvelous and sweeping production numbers. The latter, an extravaganza of whirling silverware, dishes, and assorted crockery set to the tune of “Be Our Guest” outdoes anything short of Busby Berkeley in its largess and expansive use of rhythm, movement, patterns, and panache. The other big production number “Human Again,” added to the special edition version of the film included on the disc, gives the animators and actors another tour de force sequence, but after “Be Our Guest,” it’s not quite as special.

But the quality, love, and joy put into this project is stamped onto every frame of this wonderfully vivid film. And when the Beast takes Belle for a moonlit walk around his palace, when they dance and hold hands and look into each other’s eyes, it’s the essence of screen romance despite the fact that these are animated characters. It has the magic of purity and truth without ever seeming corny or overly sentimental.

The film has been framed at 1.78:1 and is presented in 1080p using the AVC codec. Color saturation and sharpness are exemplary throughout the presentation without ever dipping into blooming, and the animation lines are crisp and unaffected by artifacting of any kind: the image is reference quality. No evidence of banding is present in the film transfer. It appears to be the same transfer as in the previous Blu-ray release. The film in its extended special edition has been divided into 22 chapters.

The DTS-HD Master Audio 7.1 sound mix makes the music sound truly spectacular with orchestra routed throughout the soundfield and singing voices mostly in the center channel with an occasional directionalized placement that makes excellent use of the rear and back channels. Dialogue has been superbly recorded and is never overpowered by the music or atmospheric effects. When the villagers attack the enchanted castle, there is again excellent utilization of the fronts and rears to give the listener an immersive experience.

Audio Commentary: carried over from previous Blu-ray releases, the commentary features producer Don Hahn, directors Gary Trousdale and Kirk Wise, and composer Alan Menken. It’s a lively remembrance of the work filled with funny and also touching stories which last right to the end of the disc. The commentary is only available with the Special Edition version of the movie.

Film Variations (HD): There are three versions of the film offered on the disc: the original 1991 theatrical cut (1:24:54), the special edition cut with “Human Again” added in, and a new-for-this-release sing along version of the original theatrical cut.

Always Belle (11:32, HD): Paige O’Hara, the original voice of Belle, reminisces about her career, recalls her five auditions for the role, and shares her memories of working with the great Howard Ashman.

#1074: Walt, Fairy Tales & Beauty and the Beast (9:36, HD) Disney staff historians discuss the genesis of the Disney library which Walt drew from for inspiration on upcoming animation projects.

Beauty and the Beast Sneak Peek (1:24, HD): director Bill Congdon shows snippets from the table read and a very brief clip or two of the live action version of the film coming in March 2017.

Classic Bonus Features (0:43, HD): a brief blurb that reminds viewers interested in previous bonus material contained in prior Beauty and the Beast releases that they can be found via streaming through the Disney Movies Anywhere code which is enclosed in the case.

Yes, it’s the same audio and video transfer of the movie which has been previously released, but Disney’s Beauty and the Beast is a rare bird among even today’s films, an unashamed musical romance that’s right for every member of the family. The Blu-ray combo package offers beautiful high definition versions of the movie with superb sound and a few new bonus features that fans may covet but which really can’t justify a repurchase unless one is a Beauty completest. Nevertheless, highly recommended! 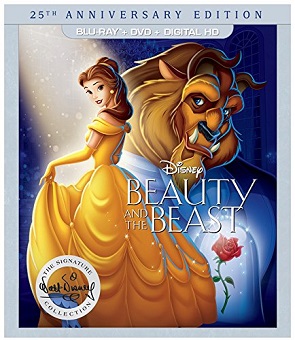