Forum List What's new Dark Style Change width
Log in Register
What's new Search
Menu
Log in
Register
Navigation
Install the app
More options
Dark Style
Close Menu
Posted on June 3, 2017 by Matt Hough
You are using an out of date browser. It may not display this or other websites correctly.
You should upgrade or use an alternative browser.
Enchanting live action version of the Disney animated classic 4 Stars

In the midst of Disney’s latest trend of reinvention of its animated properties into live action recreations (Cinderella, The Jungle Book) and reimaginings (Maleficent) comes its most ambitious and invigorating effort yet, Bill Condon’s Beauty and the Beast.

In the midst of Disney’s latest trend of reinvention of its animated properties into live action recreations (Cinderella, The Jungle Book) and reimaginings (Maleficent) comes its most ambitious and invigorating effort yet, Bill Condon’s Beauty and the Beast. With all of the beats from the 1991 animated musical classic lovingly recreated in astoundingly elaborate detail with some further development and presentation of backstories for our two title characters, Beauty and the Beast might not quite emerge with its own unique personality, but it can certainly stand tall and proud next to its celebrated, Oscar-winning predecessor.

Belle (Emma Watson), the lovely, well-read, and determined daughter of town inventor Maurice (Kevin Kline), dreams of a more fanciful and exciting life than merely being stuck in a provincial French village scoffed at by townsfolk about her unique world view and pursued by the area’s boorish war hero Gaston (Luke Evans). When her father is taken prisoner for trespassing by an angry Beast (Dan Stevens) whose castle and person are under a spell of enchantment until he can earn and give love selflessly, Belle volunteers to take his place as the castle prisoner. Once there, she meets and is charmed by the castle’s residents, all humans transformed into objects who still run the household: Lumière (Ewan McGregor), Cogsworth (Ian McKellen), Mrs. Potts (Emma Thompson), and Madame Garderobe (Audra McDonald), all of whom are anxious for Belle to help them and their master regain their humanity. As she spends more time there, she comes to see the hidden qualities of courage and loyalty buried beneath his hideous exterior but is unaware that her father has alerted the villagers about the existence of the Beast and his castle, and they’re riled and ready to storm its turrets and release the captive girl.

Stephen Chbosky and Evan Spiliotopoulos have, like their predecessor Linda Woolverton for the animated film, used the parts of the 1756 tale by Mme. LePrince de Beaumont that suit their purposes but have expanded the tale to show us an explanation for Belle’s being motherless and to let us see in the flesh the Prince’s early years (the new song “Day in the Sun”) and how he and his belongings came to be cursed (covered in the animated feature in a briefly narrated stained glass prologue, these additions accounting for this film’s running time of slightly over two hours compared to the animated story’s tidy 84 minutes). All of the musical numbers from the original animated film are here, and their recreations in live action (and, naturally, extensive CG) do not disappoint. The showstopping “Be Our Guest” is, if anything, even more elaborate than in the 1991 original, and the rousing “Gaston” takes on a greater verve as its title character is allowed to do some swashbuckling in reliving his glory days on the battlefield. The haunting title song is still used to accompany the love-fueled waltz between the title characters even if it has a slightly less affecting result due to Emma Thompson’s less worldly wise singing voice compared to that of the exquisite Angela Lansbury. The Beast is also given a powerful new song “Evermore” sung in anguish after releasing Belle from his deal with her and by far the best addition of the piece’s new songs. Director Bill Condon, no stranger to musicals after helming the galvanizing film version of Dreamgirls, begins the movie with a swirling white ball sequence that’s an eye-filling spectacle and handles all of the musical numbers like “Belle” and “Gaston” which require interaction between characters rather than just straight singing with ease and aplomb (and with far less cutting than is present in today’s movie musicals), and scenes which mix live action and CG characters (the wolf attacks, “Be Our Guest,” all of the Beast scenes) are done so dexterously than one doesn’t even think about the combination of effects and live action.

Emma Watson has a sweet, pure, if slightly small singing voice, able to handle the score without the great surging singing chops of a stage musical veteran. Dan Stevens certainly has had his voice digitally manipulated to get more guttural sounds for the Beast, but the singing is, like Watson, handled carefully and on point. Emma Thompson offers warmth and feeling as Mrs. Potts, and Ewan McGregor and Ian McKellen have a fun camaraderie as the candlestick and clock. Luke Evans offers a rousing singing voice in Gaston’s numbers and acts the part of the egotistical jerk who turns into a special kind of monster quite beautifully. As Gaston’s lackey LeFou, Josh Gad is priceless and far more emotionally developed than his cartoon counterpart, and Kevin Kline makes a loving and desperate father for Belle. Nathan Mack is a fun-loving Chip, Audra McDonald has soprano to spare as the enthusiastic Madame Garderobe, and Hattie Morahan pops up here and there as the Enchantress and the townswoman Agathe.

The original theatrical 2.40:1 aspect ratio is faithfully delivered in a stunning looking 1080p transfer using the AVC codec. Sharpness is reference quality revealing intricate details in facial features, hair, clothes, and props. Color is wonderfully saturated without ever going into cartoonish hues, and skin tones on the human beings are believable and appealing. Contrast has been consistently applied to produce such striking clarity, and black levels couldn’t be bettered. The movie has been divided into 24 chapters.

The DTS-HD Master Audio 7.1 sound mix offers the kind of reference quality sound design that top flight productions today can attain. Dialogue is mostly in the center channel though there is some sporadic directionalized dialogue. The superb songs and orchestral background score get the full surround treatment in the fronts and rears to thrilling effect especially when the chorus wells up all around the listener enveloping him in a wall of sound. Split atmospheric effects abound in the mix with occasional panning when appropriate (the wolf attack, for instance).

Enchanted Table Read (13:31, HD): the cast assembles for a read-through of the script with some surprise performances of three numbers: “Gaston,” “Be Our Guest,” and “Beauty and the Beast.”

A Beauty of a Tale (27:08, HD): various members of the cast and crew comment on the production process, the rehearsal process for the production numbers, the 1,700 effects shots in the movie, and the new songs used in the picture. Among those commenting are director Bill Condon, producers David Hoberman and Steve Gaub, production designer Sarah Greenwood, composer Alan Menken, and actors Emma Watson, Dan Stevens, Luke Evans, Josh Gad, Ewan McGregor, Ian McKellen, and Emma Thompson.

Extended Song: “Days in the Sun” (4:08, HD): the complete original version of the song cut from the film for reasons explained by director Bill Condon.

Deleted Scenes (6:23, HD): eight scenes introduced by director Bill Condon. They can be watched together or separately.

Making a Moment with Celine Dion (3:24, HD): the Grammy-winning recording star explains her original involvement with the film and her difficult decision about being a part of the new version.

The Making of the Music Video (2:07, HD): Aniana Grande and John Legend each speak on the pleasure of working on this new video.

Song Selection (33:09, HD): twelve song selections in the film can be gone to immediately with provided sing-along lyrics: individually or together in one sitting.

DVD/Digital Copy: code sheet and disc enclosed in the case.

A joyously produced and directed movie of one of Disney’s most beloved animation classics, Beauty and the Beast is an entertaining and invigorating musical treat enhanced by reference quality picture and sound. Highly recommended!

Thanks for the Review!

Is it expected the UK 3D release will have the same extras?

Just received my BatB 3D Steelbook (India) via Rahul-and-I on Ebay. Really nice looking package. Title on the spine unlike the series of pictures that appear to be on most of the other pictures. I;m not sure if those are actual item photos/expected/or just mockup.

He appears to be out of steelbooks though the std 3D is available. By reports FEDEX didn't deliver (?Lost) about half his order from INDIA so I'm not sure if he shut down SB orders until that is fixed or he really is completely sold out.

AUS 2/D/3D release 6/21 is the next country release and 1st Region B release. I guess we'll wait to see the specifics on the region coding, etc.

David Norman said:
Just received my BatB 3D Steelbook (India) via Rahul-and-I on Ebay. Really nice looking package. Title on the spine unlike the series of pictures that appear to be on most of the other pictures. I;m not sure if those are actual item photos/expected/or just mockup.

He appears to be out of steelbooks though the std 3D is available. By reports FEDEX didn't deliver (?Lost) about half his order from INDIA so I'm not sure if he shut down SB orders until that is fixed or he really is completely sold out.

AUS 2/D/3D release 6/21 is the next country release and 1st Region B release. I guess we'll wait to see the specifics on the region coding, etc.
Click to expand...

Received mine last week and watched it -a superb 3D presentation especially the last third. Next day viewed a little flat and am glad to be able to have it in 3D. Inferno is next for me.

We just watched our 3D version. This is an entertaining film. I'd be willing to give it 5 out of 5 if I weren't disappointed by Watson's singing. As Belle, she's fine until she sings. I can't get the voice of the actress that sang Belle in the original. All the other singing parts did not disappoint. Emma Thompson handles the title song wonderfully.

Going from animated to live action adds more weight. Gaston is more cruel, the growing relationship between Belle and the Beast is even more odd. The price the inhabitants of the castle is even more severe.

I liked it a lot, but I would have dubbed that one role.

I can verify that all the extras listed above are on the UK disc (2D). Except no trailer for Descendants 2 which is replaced by an advert for Disneyland Paris. No digital copy either.
You must log in or register to reply here. 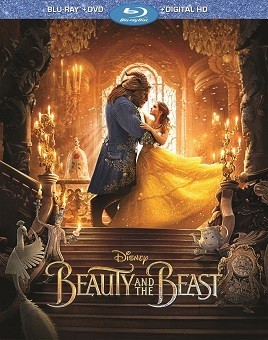