Forum List What's new Dark Style Change width
Log in Register
What's new Search
Menu
Log in
Register
Navigation
Install the app
More options
Dark Style
Close Menu
Posted on November 5, 2016 by Matt Hough
You are using an out of date browser. It may not display this or other websites correctly.
You should upgrade or use an alternative browser.
Leaden western farce hasn't improved with age. 2.5 Stars

Tastes in comedy certainly vary from person to person, so it’s possible that Preston Sturges’ The Beautiful Blonde from Bashful Bend may be more your cup tea than it was mine.

After enjoying a string of box-office successes (several like The Lady Eve and Sullivan’s Travels are now considered genuine classics) and winning an Oscar in the first half of the 1940s, Preston Sturges began to lose his Midas touch as the decade wore on so that at its end, his Hollywood cred was pretty much shot. Fox’s Darryl Zanuck offered him two of his top stars for two late-decade vehicles, but neither Unfaithfully Yours with Rex Harrison (now considered highly) nor The Beautiful Blonde from Bashful Bend turned the tide for the writer-director. In the case of the latter, with Fox’s biggest star Betty Grable heading the marquee, its surprisingly mammoth commercial misfire was the last straw, and Sturges was pretty much finished in Hollywood. Unlike some of his other flops from the 1940s, The Beautiful Blonde from Bashful Bend has never undergone a revelatory revaluation; it’s still considered now what it was then: a rather tortured farce that strains invariably for jokes that simply aren’t inspired or very funny.

After accidentally shooting local Judge O’Toole (Porter Hall) twice in the rear while she was aiming at her two-timing sweetheart Blackie (Cesar Romero), temperamental saloon entertainer Freddie (Betty Grable) with pal Conchita (Olga San Juan) in tow makes her escape and ends up in Snake City masquerading as schoolmarm Hilda Swandumper even though she barely knows how to read and write herself. Local gold miner Charles Hingleman (Rudy Vallee) takes a shine to the new school mistress not knowing there’s a $1,000 price on her head for her capture, but Freddie is too mired with the local town nuisances the Basserman boys (Sterling Holloway, Dan Jackson) and trying to keep her identity secret from the sheriff (Alan Bridge) and an observant local merchant Mr. Jorgensen (El Brendel) to be anything but continually flustered especially when Blackie arrives in town ready to claim his sweetheart all over again.

Preston Sturges’ script is really a broad, broad attempt to wring some humor out of the usual western motifs, and one can understand why Betty Grable would have been attracted to such a project: though playing a saloon singer, her musical moments are minimal (two songs: a solo “Every Time I Meet You” and “In the Gloaming” as a duet with Rudy Vallee and no dancing though Sturges takes every opportunity to get her out of her gowns so her famous legs can get the utmost exposure) and the droll lines and goggle-eyed farce would be something new for her. But very little of it works with the speed and punch that real farce should be pitched at (everything and everyone seems slow to react and comic visuals are telegraphed so obviously that all the fun is taken out of them). Sturges tries here a technique that had worked for him in the past: repeating the same gag four or five times in a row, but either it wasn’t funny to begin with or the trick had lost its novelty because the laughs just aren’t there. The climactic shootout between the bullying head of the Bassermans (who mistakenly thinks his sons have been murdered) and Freddie and her supporters goes on way too long for the little bit of humor it yields (despite the excess number of bullets expended, no one gets killed though in today’s world, there’s nothing remotely funny about a gunfight especially one that is baseless), and everything is wrapped up very predictably. On the plus side, Rene Hubert’s costumes for the ladies are all wows, each more zestily Technicolored than the last.

Betty Grable never quite seems to get into character, and her character’s explosive temper seems to come from nowhere and seems very artificial. Clearly this kind of outrageous farce was not right for her. Olga San Juan is almost completely wasted as her pal apart from a few droll witticisms about men and about her ill treatment as a second class citizen (Mexican masquerading as an Indian). Cesar Romero as a strutting popinjay and Rudy Vallee as a soft-spoken intellectual play pretty much to type. Sturges allows outrageous overacting from Porter Hall, Sterling Holloway, and Dan Jackson, most of it not very funny. Hugh Herbert gives his expected “woo-woo” performance as the flustered local doctor, but the biggest surprise in the cast is El Brendel’s toned-down performance as Mr. Jorgensen. One of the most outrageous comic farceurs of early talkies, he’s almost subdued here surrounded by everyone else who’s chewing the scenery all around him. Glamorous Marie Windsor makes for a dazzling moment or two near film’s end as Blackie’s latest amour, and Margaret Hamilton pops in for a familiar bit of ornery business, too.

The film’s 1.33:1 theatrical aspect ratio is delivered faithfully in this 1080p transfer using the AVC codec. The lack of true Technicolor elements for Fox color movies of this era is widely known, but their lack is very evident here in one of the stranger looking transfers Fox has offered third party vendors. While sharpness is excellent and the Eastmancolor elements which survive blaze as vividly as they can (reds, oranges, and turquoise really do pop), to prevent the overly dark images that have turned up on Fox Cinema Archive releases that must utilize Eastmancolor elements, brightness and contrast have been combined in such a way as to destroy black levels pretty thoroughly (the pillarbox bars on the side are gray rather than black), and there is contouring and crushing in the image in darker scenes that is not pretty to see. Age-related specks and scratches have been completely removed, so the image is clean if overly bright and sometimes milky to watch. The movie has been divided into 8 chapters.

The DTS-HD Master Audio 2.0 mono sound mix professionally combines the dialogue, Cyril Mockridge’s background score, and the atmospheric effects (all that shooting) with no element overpowering any of the others. Age-related issues with hiss and crackle have also been eliminated for a solid era-typical mono track.

Tastes in comedy obviously vary from person to person, so it’s possible that Preston Sturges’ The Beautiful Blonde from Bashful Bend may be more your cup tea than it was mine. The comedy often seems pushed too hard for effect stifling the laughs and flattening any inspired performances that may be on view. And the Blu-ray release likewise offers a mixed visual bag: excellent sharpness and lush color but at the expense of decent black levels and soft, milky contrast. Fans will likely be glad to have it in high definition even with the compromised visuals.

Thank you for this review, and for being so explicit about the picture quality. I’m undecided about buying this disc. I like Betty Grable a lot and I want more Marie Wilson on disc. (Betty Grable must have been very tolerant to have allowed a curvaceous blonde like Marie Wilson to be in her movie) I’m also a big fan of Preston Sturges when he’s on target but, like most of his admirers, I’m mystified about why the talent and skill suddenly vanished in the late 1940s.

Robin9 said:
Thank you for this review, and for being so explicit about the picture quality. I’m undecided about buying this disc. I like Betty Grable a lot and I want more Marie Wilson on disc. (Betty Grable must have been very tolerant to have allowed a curvaceous blonde like Marie Wilson to be in her movie) I’m also a big fan of Preston Sturges when he’s on target but, like most of his admirers, I’m mystified about why the talent and skill suddenly vanished in the late 1940s.
Click to expand...

?
Marie isn't in this movie. I'm not sure she ever made a film with Betty Grable. I can't think of one right offhand. You must have meant Marie Windsor.

Matt Hough said:
?
Marie isn't in this movie. I'm not sure she ever made a film with Betty Grable. I can't think of one right offhand. You must have meant Marie Windsor.
Click to expand...

You're quite right. My apologies. I got my wires severely crossed.

Just got this during Kino's last sale. Honestly I thought something had gone wrong with my TV. All the blacks were gone and the pillarbox bars were even gray. Matt, you are the only reviewer who even addressed this. So was this removal of black levels deliberate by Kino? It would appear so as the pillar bars should always be solid black. Otherwise I would say this is a defective master.
You must log in or register to reply here.

Bend of the River – Blu-ray Review 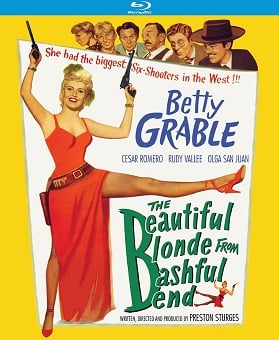