It has been said that the most painful thing to watch is a comedy that has little to no laughs. The big-screen version of Baywatch is just that, and probably explains why it was one of the summer’s biggest box office disappointments.

I’m going to be very upfront and honest here. I have never watched a single episode of the iconic 1990s television series Baywatch, which starred David Hasselhoff, Pamela Anderson, Alexandra Paul, Yasmine Bleeth, Nicole Eggert, and many other beautiful people. I understood the premise, somewhat, and knew the structure of the show, and that it was the highest rated TV series in the world. Hollywood had been kicking around the idea of a big screen version of the series for years, and in the summer of 2017 Paramount released the R-rated comedy starring Dwayne Johnson as Mitch Buchannon (Hasselhoff’s role). The premise – Mitch’s team would take on three trainees for the summer chosen from hundreds of recruits based on their results from an endurance test. Mitch and his team, Stephanie Holden (Ilfenesh Hadera) and CJ Parker (Kelly Rohrbach) choose Summer Quinn (Alexandra Daddario) and the rather unfit Ronnie Greenbaum (Jon Bass), while the captain of Baywatch, Thorpe (Rob Huebel), forces them to choose washed up gold medal Olympic swimmer Matt Brody (Zac Efron) as part of his mandatory community service sentence (for what, exactly, is never divulged). Brody doesn’t get along well with others, and quickly butts heads with Mitch, who isn’t going to take any of his crap.

Meanwhile, Victoria Leeds (Priyanka Chopra) has just taken over a resort in town, with eyes to take all beachfront property private by dealing drugs to drive down property values so she can snatch them up at bargain prices and expand her resort, by all means necessary, including bribing politicians and officials and eliminating anyone who gets in her way. When drugs begin washing up on shore and a city council member (Oscar Nunez) is found dead, Mitch has his team of lifeguards begin an investigation of their own, much to the disapproval of Thorpe and Sgt. Ellerbee (Yahya Abdul-Mateen II).

This is all supposed to make for funny situations and scenarios. Unfortunately, the jokes either fall flat or go on for far too long that they cease being funny anymore. Or the jokes go too far in being raunchy just for the sake of being raunchy because the studio greenlit Baywatch as an R-rated comedy. Director Seth Gordon, who has directed some of the funniest episodes of ABC’s The Goldbergs, can’t seem to decide what type of movie he’s making, as the tone is all over the map. At times, it feels like the movie is trying to pay homage to its roots, yet other times it feels like it is spoofing or parodying it. And why, if this is supposed to be a raunchy comedy likely aimed at older teenage boys (based on the amount of F-bombs dropped every few minutes), are we being subjected to so much male nudity? And speaking of tone, Alexandra Daddario’s Summer Quinn is a total bitch in one scene, then a sweet innocent charming girl the next, then back to being a bitch, as if someone changed their mind about her character midway through production, but never bothered to reshoot any scenes as cover. Brody’s transformation from jerk to mature and responsible is unbelievable and occurs exactly when the plot requires it. Sadly, Dwayne Johnson, despite how likeable an actor he is, can’t save this sinking ship. I complained about how this movie runs too long, and only reviewed the theatrical cut, which runs four minutes shy of two hours. The extended, unrated cut runs an additional five minutes, and I just could not find myself willing to waste another two hours of my time to determine the difference.

Baywatch was captured on Alexa XT Plus cameras and completed as a 2K digital intermediate. Paramount’s 2160p upscale benefits slightly thanks to the higher resolution, higher bitrates, and wider color gamut that UHD and HDR10 provide. Fine detail is just a tad stronger, allowing those grains of sand to appear more coarse. The big improvement over the 1080p Blu-ray is brighter and more vivid colors that really pop on the screen, especially the reds of the lifeguard’s swimsuits. This is a very colorful film (in more ways than one), and really takes advantage of HDR.

The Dolby Atmos track, which plays back as a Dolby TrueHD 7.1 track on non-Atmos equipment, takes full advantage of the wider frequency and dynamic range, particularly in its rock and hip-hop soundtrack.

All of the special features can be found on the included Blu-ray.

Meet the Lifeguards (1080p; 21:36): The cast and crew self-congratulate the cast and how wonderful everyone is.

Continuing the Legacy (1080p; 9:27): The impact of the original series and how the movie pays homage without making fun of it. Whatever….

Deleted and Extended Scenes (1080p; 10:06): CJ Messes with Stephanie, Coffee and Doughnuts, Where Could I Score?, Bathroom Misunderstanding, Directions to the Morgue, and Brody and Captain Thorpe.

An unfunny comedy that runs too long, Baywatch does have a great video and audio transfer that will likely please the few fans the film has. 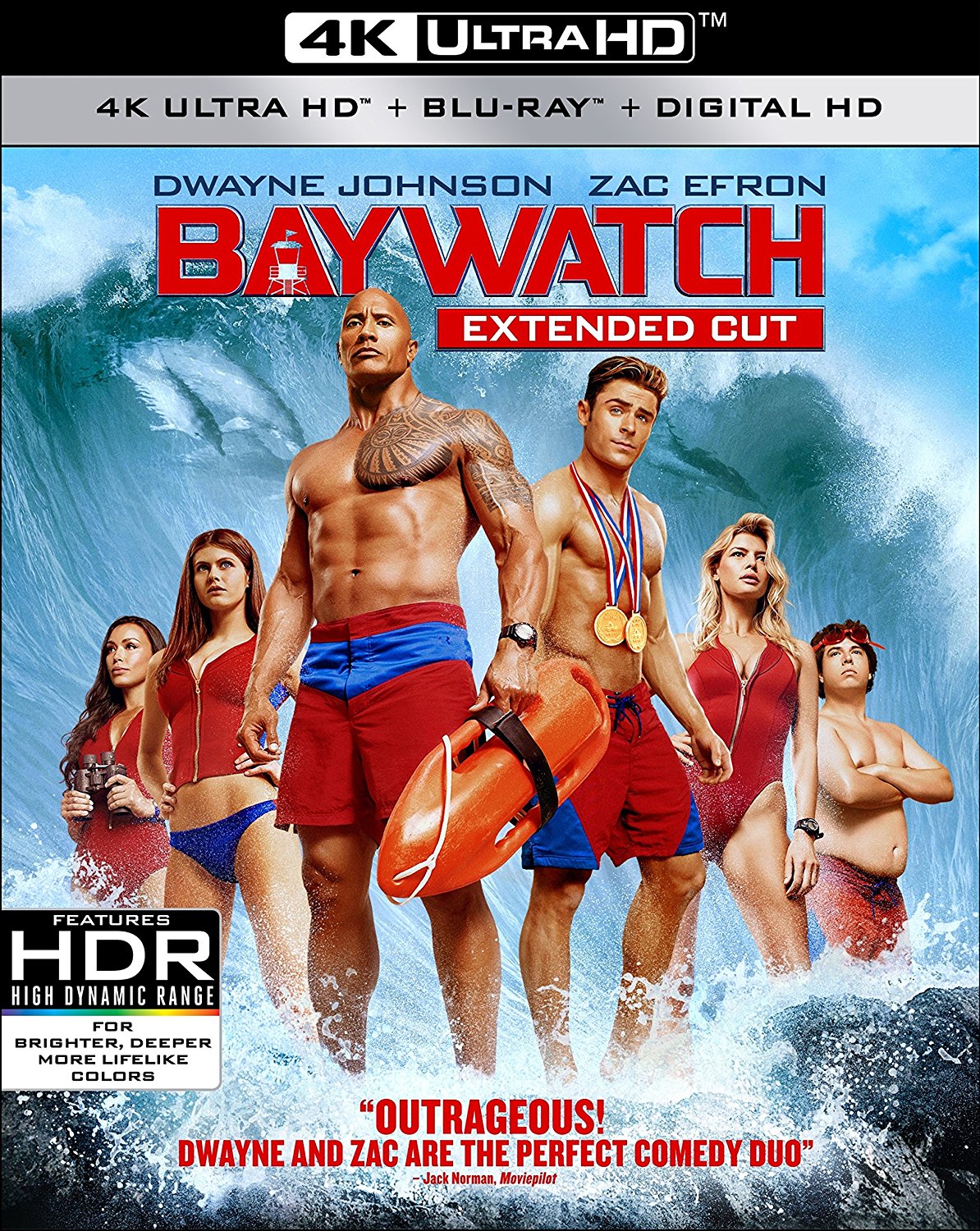