Battle of the Sexes, with its fine performances, superb recreation of 1973 with period details and flourishes, and presciently timed story, is compelling if imperfect. It’s a fun watch and worthy of your time, even if that’s just via rental.

Bobby Riggs: I’m the ladies number one. I’m the champ. Why would I lose?

It’s the early 1970s and tennis great Billie Jean King leads the charge for equal pay on the pro-tennis tour circuit. Having kicked off a boycott of the U.S. Lawn Tennis Association when they refuse to bring financial equity to the winnings women receive compared to men, she finds herself in a personal struggles with her sexuality. Forming what would become the Women’s Tennis Association, King and her fellow tennis players make ripples in the world of professional tennis. At the same time, Bobby Riggs, a former Tennis champion himself, struggles with a gambling addiction and desire for the limelight. He has an idea to challenge the greatest women’s tennis player to a match, in part to prove that men are “better”. What results is the legendary “Battle of the Sexes,” where the event becomes a focal point for the national conversation on gender equality.

Battle of the Sexes, capably directed by Valerie Faris and Jonathan Dayton from a script by Jonathan Dayton, is really the story about two very different people at different places in their lives, connected by the sport of tennis. The film offers a little deeper-than-surface examination of their personal struggles and journey to meet on the court in a moment that helped shape gender quality discussion during the tumult of the early 70s. The story of 55 year old Bobby Riggs (Steve Carell), struggling with his gambling habit, his wife intolerant of such foolishness, and 29 year old Billie Jean King (Emma Stone), at the top of her tennis game, but struggling with her sexuality and the pressures of trying to bring about social equality for women, makes for compelling viewing. While the resulting film doesn’t bring as much depth to the serious implications of this moment in history, the examination of this event remains fascinating.

The bizarre 1973 tennis match event, dubbed the Battle of the Sexes, was a sporting event spectacle that became a defining moment among many moments in the1970’s. America was in a state of heavy shift. It was just five years after the passage of the Civil Rights Act, with the Watergate Scandal, continuing Vietnam War protests, and the Women’s liberation movement’s continuing pursuit of gender equality, in full swing. And amidst the social upheaval, this tennis match became a proxy battle. Bobby Riggs’ provocateur grandstanding and desire for the limelight ignited what would become a must-see event. With sexists and proud chauvinists leading the charge in support of him, and hopeful social change agents and so-called ‘women’s libbers’ firmly behind Billie Jean King, the event took on broader implications for the women’s movement and social equality.

Battle of the Sexes chooses to concentrate on just a slice of this spectacle, from Riggs’ initial idea through King’s refusal to take part and her eventual acceptance of the challenge. And in that decision, it seems there’s a deeper tale untold here. The film demonstrates both the rampant and casual sexism ingrained in the world of 1973, and chooses an interesting narrative construction to house the story, but as we start to peel back some of the psychology of the two central characters–King and Riggs-the story moves on. Billie Jean King’s legendary status and deep struggle, though a core of the focus here, never achieves the depth of examination it deserves. Similarly, Bobby Riggs’ persona and psychology is dissected to even begin exploring why he was who he was. That softens the impacts of the overall story. Even the tennis, the center and focus of King’s world (and Bobby’s to a large extent, too,) never feels as important as it needs to be, save for the fine reconstruction of their eventual court dual.

Performances establish Battle as a high point of 2017’s cinema, with Emma Stone as Billie Jean King being a delight to watch. Her vital performance carries the resolute and understated confidence of the great Billie Jean King. King, a fearless leader for social justice and certainly one of the greatest sports figures to have lived, deserves a more tailored biographical feature as what we get here seems to skim the surface of her personal struggle and her passionate fight for the cause. But Stone is compelling regardless. Andrea Riseborough as King’s unexpected love interest, Marilyn Barnette, is strong, and Austin Stowell’s Larry, Billie’s husband who quickly comes to understand his wife’s sexual struggle and love of another women, implores empathy and respect. Sarah Silverman’s brash leader, Gladys Heldman, is wonderful, as is the rest of the supporting cast, which includes Bill Pullman’s rampantly sexist tour promoter, Jack Kramer, and Elisabeth Shue as Riggs’ estranged wife, Priscilla.

Finally, Steve Carell brings a wonderful fire and energy to his performance as Bobby Riggs. He manages to humanize and, at times make vulnerable, the defiant chauvinist and social dinosaur (at a more accepting time for his sexist shenanigans). It’s hard to tell if the Riggs on display here actually believes the blatantly sexist things he’s saying or if he’s simply exaggerating these things to play to the cameras. In many ways he’s a prototype for the shallow reality television star figures we suffer through today, becoming distorted or amplified versions of who they think they need to be in order to remain relevant.

Framed at 2.39:1, Battle of the Sexes looks exquisite, with a fine layer of grain and the yellow-brown tinged palette ringing so authentically of the 1970s. It all appears with lovely detail. The authenticity of the ‘look’ might sacrifice an overly crisp level of detail, favoring a more muted feel, but it works better transporting us to the era. Skin tones tend to be warm, close-ups reveal the finest details, particularly the close-up of Emma stone as she sits in silence following the titular match. Black levels and shadows are very good as well.

With its DTS HD-Master Audio 7.1 track, the audio surrounds the listener excellently with the sounds of period songs and cheering crowds. The most dynamic being, not unexpectedly, the famous match that closes the picture. Dialogue, centrally focused, is crystal clear and issue free, and the score by Nicholas Britell, while largely understated, gets the opportunity to swell at the right moments, taking advantage of the fine audio option available.

A light collection of extras, including a nearly 20-minute behind the scenes look and the interesting footage of King’s entrance to the ‘Battle’ event. The galleries are quite interesting (something we don’t see as much of anymore,) but it’s the interview with King that you’ll find to be the most important inclusion, though it’s sadly quite short.

Billie Jean King: In Her Own Words

Battle of the Sexes, with its fine performances, superb recreation of 1973 with period details and flourishes, and presciently timed story, is compelling if imperfect. It’s a fun watch and worthy of your time, even if that’s just via rental.

As one who competed in junior tennis back then as well as being a ball boy (back then there were no ball girls) for major tournaments, I followed tennis pretty closely. Even back then I found this spectacle to be farcical to be called a "Battle of the Sexes" between a mediocre middle-aged player and (at the time) the best female tennis player. It would have been more interesting for her to play someone like John Newcombe as a true battle of the sexes. It was nothing more than a media circus that I never took seriously and the loss of Riggs was not surprising in the least. This movie might be interesting as nostalgia but otherwise, I have no interest in going back and reliving the ridiculous event.

I watched this tonight. I also am old enough to have lived through the events depicted in the movie, so I appreciated the behind-the-scenes look at what was going on. (I will admit that I was surprised to be reminded that the King-Riggs match went three sets (best of five, I guess) and not two (best of three).

I went into the movie thinking Bobby Riggs was going to be the villain of the piece and emerged with a different take on this huckster altogether. Imagine my surprise that the legendary Jack Kramer was the real villain of the film.
Reactions: Neil Middlemiss
You must log in or register to reply here.
Share:
Facebook Twitter Reddit Pinterest Tumblr WhatsApp Email Link 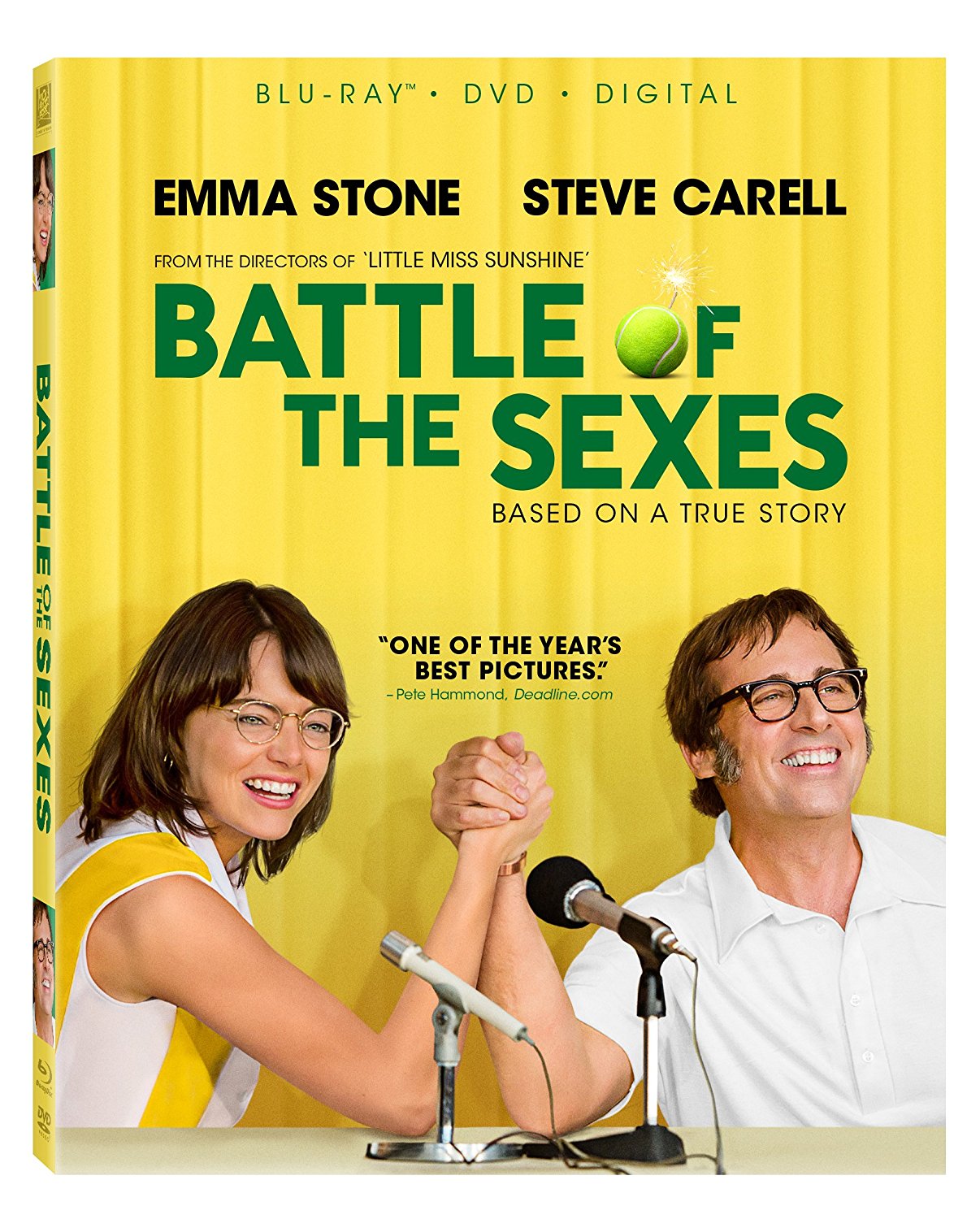