Battle Cry, a sprawling but sanitized adaptation of the best-selling novel by Leon Uris, arrives on Blu-ray from the Warner Archive in glorious high-definition.

Battle Cry, a sprawling but sanitized adaptation of the best-selling novel by Leon Uris, arrives on Blu-ray from the Warner Archive in glorious high-definition.

Leon Uris, best known for his novel “Exodus,” dropped out of high school after Pearl Harbor and enlisted in the U.S. Marines when he was 17. After boot camp and radio school in San Diego his battalion was sent to New Zealand, and then on to Guadalcanal and Tarawa. Uris based his novel upon his wartime experiences, and when the film rights were sold to Warner Brothers he also was signed to write the screenplay. The resulting film is mostly faithful to the book although, it being 1955, the oftentimes profane dialogue had to be cleaned up and the rowdiness of the Marines who are portrayed in the book had to be downplayed a bit.

I mention this because, in spite of its title, Battle Cry is not a typical war film. It follows a group of Marines from the day they enlisted through boot camp and school, on to New Zealand for more training, and finally into combat on Guadalcanal late in 1942. Along the way we get to learn a lot about this group of mostly young men, who are portrayed by a fine ensemble cast. Among them are Danny Forrester (Tab Hunter) who, like Uris, is a Baltimore native who signed up to be a Marine shortly after Pearl Harbor. Danny is sort of engaged to Kathy (Mona Freeman), his high school sweetheart. Andy Hookens (Aldo Ray) is a muscular lumberjack who has had plenty of girlfriends but has carefully avoided making any commitments. Marion Hotchkiss (John Lupton) is a serious-minded intellectual who wants to write a book about his life in the military. “Ski” Wronski (William Campbell) is a Polish-American from Philadelphia who plans to save up enough money to bring his girlfriend to San Diego so they can get married, in spite of her father’s opposition. “Spanish Joe” Gomez (Perry Lopez) is a hot-headed troublemaker, and L.Q. Jones (Justus McQueen) is a practical joker from Arkansas. The absence of black characters is no oversight – the Marine Corps was not integrated until after World War II (while there are a few black extras in some scenes – apparently real Marines – they have no speaking parts).

When they arrive at boot camp in San Diego the recruits are introduced to their drill instructor, Sergeant Beller (Gregory Walcott), who informs them that they are “the lowest form of animal in this here universe.” After they complete their rigorous training they are assigned to the Second Battalion under Major Sam Huxley (Van Heflin) and a salty Sergeant known only as “Mac” (James Whitmore) who also provides the film’s narration. The new Marines go on to radio school, where they learn Morse Code, go on many grueling hikes, and occasionally get liberty in San Diego. Ski, who has been dutifully saving his money, goes on a drinking binge after receiving a “Dear John” letter from his girlfriend, who has gotten pregnant and is going to marry the father. Marion meets a beautiful but mysterious woman named Rae (Anne Francis) while riding the ferry from San Diego to Coronado. Danny, who has been behaving himself, decides to tie one on at a San Diego bar and passes out. He wakes up later at the USO, where he meets Elaine Yarborough (Dorothy Malone), a beautiful and lonely Navy wife whose husband is in San Diego for only a couple of days each month. Danny begins to spend all of his free time with Elaine and he stops writing to Kathy.

These new Marines are then deployed to New Zealand, where they receive further training to get them ready for combat. While there Andy, the lumberjack who claimed to have hundreds of girlfriends back home, gets into a serious relationship with Pat Rogers (Nancy Olson), a widow whose  husband was killed in Crete. However, as is the case with all of the Marines, Andy finds it difficult to envision a long-term relationship with any woman because of the vagaries of war.

At this point you might find yourself asking, “When do the battles begin?” In fact, these Marines do not land on Guadalcanal until nearly 90 minutes into the film, but that is true to the novel. Leon Uris was interested in showing how Marines were made – how they trained, how they dealt with loneliness, and how they played. While some of the characters may seem like clichés, I was in the Navy some 20 years after World War II and most of the characters in Battle Cry ring true to me. My pal Dan, from a coal mining town in Maryland, was barely in the Philippines for a few months before he received a “Dear John” letter from his girlfriend. She was 18 and grew bored of sitting at home on weekends while her friends went out on dates. “Weird David,” a young sailor from the Midwest, was planning to become a priest until he was persuaded to go into the uninhibited town outside the base and was introduced to 25 cents beer and $5.00 women. One married man who was scheduled to be transferred stateside had to remain in the Philippines a bit longer when he came down with a case of gonorrhea. And I know of at least one sailor who remained true to his fiancée back in Texas. It takes all kinds.

Battle Cry is directed by Raoul Walsh, a prolific director who had previously depicted World War II in the films Objective, Burma! and Fighter Squadron. The actors are mostly excellent, in particular Aldo Ray as Andy. Raymond Massey has a cameo appearance as a general and Fess Parker has a small role. It is worth noting that actor Justus McQueen liked his role so much that he took his character’s name, and as L.Q. Jones he embarked on a long career as an actor, director and producer. Battle Cry may be the first Hollywood film to depict the contributions of the Navajo windtalkers, who transmitted messages in their native tongue so that they could not be translated by the Japanese. The combat scenes are not as graphic as we expect to see nowadays, but they are competently done.

Battle Cry may be a bit slow-moving for some viewers, but it is an entertaining film which I recommend. The fact that it is now available as a gorgeous Blu-ray will add to your enjoyment.

This CinemaScope presentation of Battle Cry is correctly framed at 2.55:1 and is delivered in 1080p via the AVC codec. The picture is consistently sharp and detailed, and fine grain has been retained to produce the kind of pleasing, film-like appearance that we have come to expect from the Warner Archive. The print is free of damage and other age-related artifacts.

The studio had the full cooperation of the U.S. Marine Corps and the boot camp exteriors were filmed on location at Camp Pendleton in California, thus lending the film a heightened sense of authenticity (although there is one scene involving Danny and Kathy on a beach which obviously was filmed on a studio set). The cinematography is by Sid Hickox, a longtime Warner Brothers favorite (To Have and Have Not, The Big Sleep, White Heat, etc.).

The English 5.1 DTS HD-MA audio is excellent, with crystal-clear dialogue and pleasing stereo separation. The rousing score by Max Steiner has superb fidelity. The combat scenes are delivered with impressive audio realism.

The only extra on this Blu-ray disc is the film’s theatrical trailer, which is in pretty good shape.

There are no designated chapter stops, but it is possible to advance through the film at varying intervals.

Battle Cry is faithful to its source material. As the New York Times said about the book, “Mr. Uris remembers every detail of Marine life, whether the rigors of boot camp or the horrors and heroism of battle…This is, one feels, the Marine Corps as it really is: the fanatical discipline, the boys inflamed with pride who fought so superbly, the drunken binges and casual love affairs, the death and the glory.”

Battle Cry is available at the Warner Archive website or at Amazon. 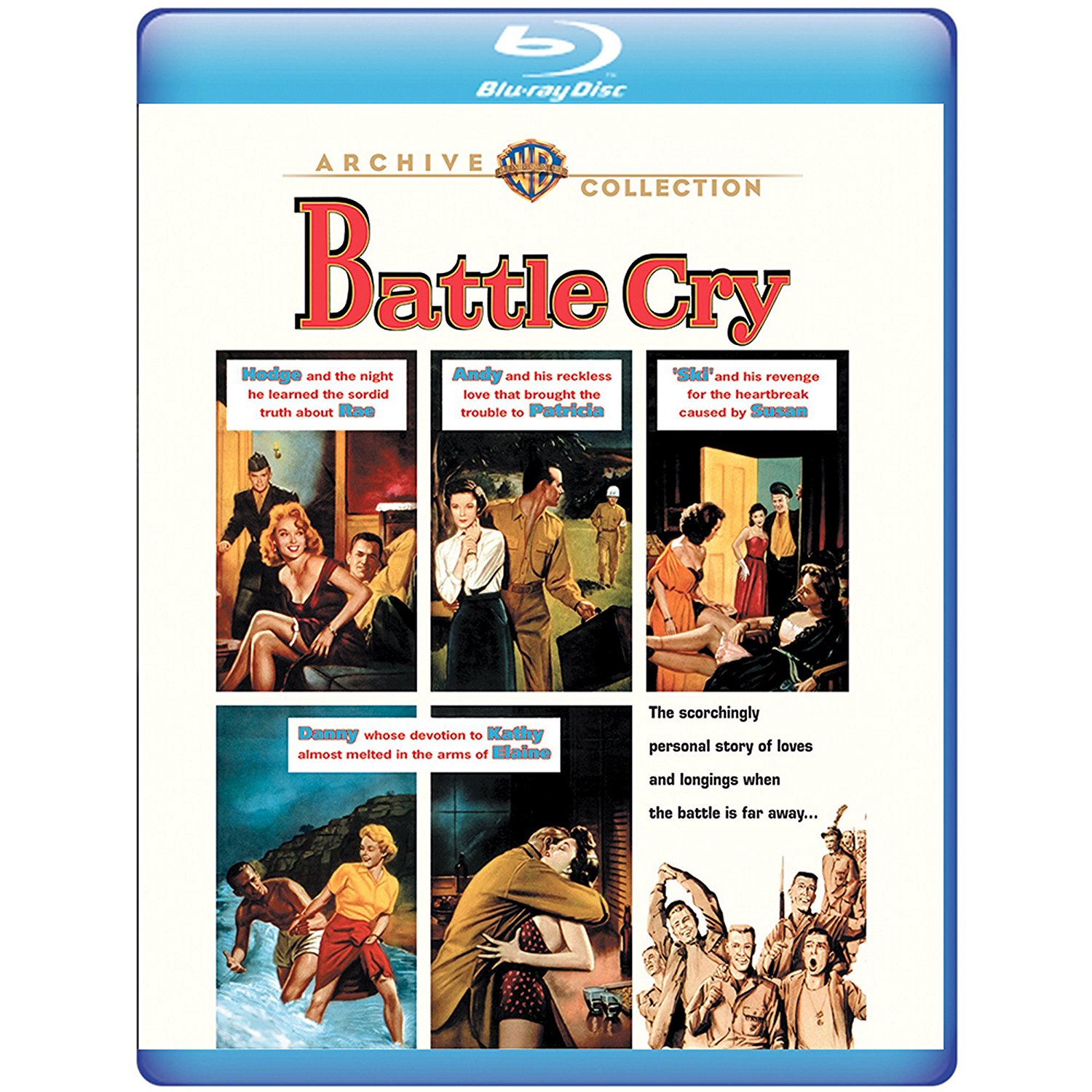