With the success of 1989’s Batman, Warner was eager for a sequel and approached Tim Burton to return to the director’s chair. He agreed, as long as he would be able to have more control over the story line and vision. Burton’s idea for Batman Returns was to bring in two main villains – Pengiun (played by a scenery chewing Danny DeVito) and Catwoman (Michelle Pfeiffer) – with support from business tycoon Max Shreck (Christopher Walken, also chewing the scenery). And thus begins one of the issues that not only plagued the rest of this series of Batman movies, but also the Spider-man sequels, where too many villains spoil the broth. Burton is so in love with these three characters that the title character, Batman (a returning Michael Keaton), rarely, pardon the pun, returns. The three actors playing the villains quite obviously are relishing in their roles, but what is lacking is a cohesive or even interesting story. I have often enjoyed this film mostly for its performances and production design (by Bo Welch), but felt the film was pretty empty when the end credits rolled.

Batman Returns is full of dark imagery and various shades of blacks, and that is the real highlight of Warner’s 2160p HEVC-encoded transfer with HDR10 high dynamic range. It is those dark shadow details and gradients of black that make this a definite demo disc to show off your UHD display’s black level capabilities. Colors are vibrant where necessary, although the film appears to be bathed in blue. Detail is excellent, with every stitch and crease in Catwoman’s outfit clearly visible. Much of that also translates to the included Blu-ray disc, which was struck from the same 4K transfer (but downscaled, obviously, to 1080p and no HDR), which at press time is only available in this 2-disc set.

For all of you trivia geeks, Batman Returns was the first film to be officially released in the Dolby Digital 5.1 sound system (Star Trek VI: The Undiscovered Country was a test release). Warner’s new Dolby Atmos mix (which is the default track, for a change) is a delight, sound cues are more discretely placed and sounds move seamlessly from one end of the room to another. LFE is strong, with Danny Elfman’s score receiving a nice low-end boost as well as explosions and crashes. Heights are used sparingly, more to provide a sense of immersion than any noticeable discrete effects. I wouldn’t say it is a demo-worthy track, but it is an improvement over the original (and included) 5.1 mix.

Although no new special features have been created for this release, it does include all of the features included on the previous Blu-ray release. The UHD disc contains only the audio commentary as a bonus feature, everything else can be found on the included Blu-ray in standard definition.

If you are a fan of this film, then this is a must-have upgrade whether you have upgraded to 4K or not. 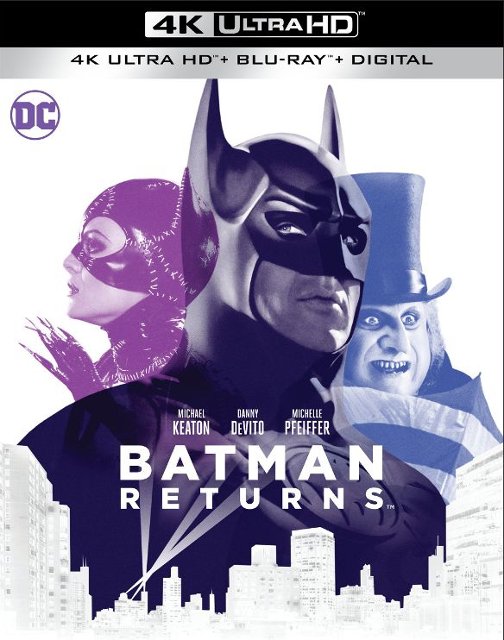