It may be haphazard and fundamentally absurd, but Woody Allen’s Bananas still packs a massive comedy punch.

Woody Allen’s Bananas is one of his earliest self-directed comedies and typical of his output at the time: it’s chock-a-block full of disorganized albeit extremely humorous and satirical ideas sort of flung against a wall to see which ones have any staying power. It’s fast and frantic comedy on the run, less well directed than even his films a couple of years later would be, but this on-the-job training he received here would hold him in very good stead in the years to come when he better focused his creative ideas to more well-rounded scripts.

Fielding Mellish (Woody Allen), a hapless product-tester in New York, is desperately attempting to impress a young and attractive social activist named Nancy (Louise Lasser) whose most ferocious project is in support of the rebels fighting against a dictatorship regime in San Marcos. When Mellish can’t make his relationship with Nancy work, he travels to the turbulent country of San Marcos where the dictator General Emilio M. Vargas (Carlos Montalbán) plans to use Mellish as a scapegoat to gain U.S. support for his government. But the general’s plan backfires when Mellish falls in with resistance fighters and, before long, becomes drafted as their leader. But being leader involves knowledge and responsibilities that Mellish is ill-prepared to take on.

Woody Allen’s script (co-authored with Mickey Rose) combines lots of slapstick sight gags involving Mellish’s general incompetence with machines and contraptions of all kinds including weapons (an early sequence shows him product testing an executive office workout system that has some inspired visual gags and a later montage as he trains as a revolutionary is likewise hysterical; so, too, is a fast food order with five wheelbarrows full of cole slaw) with his usual verbal dexterity, always to good effect (a lengthy courtroom sequence near the end of the movie may go on too long, but it has some brilliant ideas behind its legal subterfuge). Allen opens and closes the film with broadcast sports legends Don Dunphy and Howard Cosell providing play-by-play coverage of two events: a political execution and a wedding night deflowering as if they were prizefights, absurd on paper and yet surprisingly effective in two such different encounters even if the closing sequence doesn’t give him the slam-bang finish which would have sent the movie completely over the top. Elsewhere there are niggling problems: a couple of child molestation jokes sprinkled through the script really don’t play well nowadays (especially with recriminations which have been hurled the director’s way in recent years), there are some sloppy directorial choices including some poorly focused shots that reek of carelessness, and the general disorganization of the comic business doesn’t allow the comedy to grow, Allen seemingly content to get laughs in sporadic bursts instead of consistently constructing his ideas for maximum payoffs.

As always, Woody Allen plays the conflicted Jewish intellectual, a combination of arrogance and insecurity in a mostly appealing package (see him matter-of-factly take over an operation in his father’s operating room when he shows up to bid his parents farewell). Louise Lasser, then Mrs. Woody Allen, plays her familiar foggy ditz pleasingly, but Diane Keaton would be able to do this and so much more so much better in upcoming movies. More impressive are revolutionaries Carlos Montalbán as Vargas and Jacobo Morales as Esposito who declares the country’s new national language will be Swedish. Stanley Ackerman and Charlotte Rae have that funny scene as Fielding’s parents in their operating room, and Howard Cosell and Don Dunphy do what they were so famous for doing in their own sportscasting eras: providing set-ups and play-by-play for leading sports events. Yes, that is the young Sylvester Stallone as a subway mugger in an early scene coming into contact with the heroic Fielding Mellish before those ornery subway doors fail to cooperate.

The film’s original 1.85:1 theatrical aspect ratio is faithfully reproduced in this 1080p transfer using the AVC codec. As with so many MGM/Woody Allen transfers, the results are very good if a little less than great. There are the usual dust specks and minor debris that can be glimpsed here and there. Color is bright even with slightly reddish skin tones. Sharpness is acceptable but certainly not razor-edged. Black levels are surprisingly good in the few dark scenes in the movie. The movie has been divided into 24 chapters.

The DTS-HD Master Audio 2.0 mono sound mix represents the era’s typical monaural sound rather well. Dialogue has been recorded adequately with only a few bits of rather garbled speech and has been combined expertly with Marvin Hamlisch ‘s amusing score (back in the days when Allen commissioned composers to provide backgrounds for his comedies) and the various ambient effects. Engineers have done a fine job removing any problematic hiss, crackle, or flutter from this early Woody Allen effort.

It may be haphazard and fundamentally absurd, but Woody Allen’s Bananas still packs a massive comedy punch. There are only 3,000 copies of this Blu-ray available. Those interested in purchasing it should go to either www.twilighttimemovies.com or www.screenarchives.com to see if product is still in stock. Information about the movie can also be found via Facebook at www.facebook.com/twilighttimemovies. 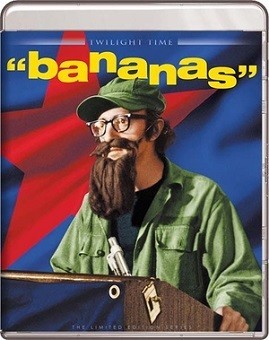