Posted on June 2, 2017 by Matt Hough
One of the masterpieces of animated storytelling. 4.5 Stars

Of the Disney Big Five (the first five animated features Disney produced beginning with Snow White), Bambi is its supreme masterpiece. It’s a film which combines with utmost surety and finesse the amalgamation of story, song, and characterization that made it, and continue to make it, one of the most beautiful, elegant, and memorable movies in the history of animation and of movies in general. There isn’t a moment of the film that one would wish different, and from the voice actors to the songs which work so in synch with the story, the movie is simply magical with nary a misstep. Bambi is perfection.

When young fawn Bambi (Donnie Dunagan) is born, all of the forest comes running to witness his first awkward steps. Almost immediately he makes a friend in outspoken bunny Thumper (Peter Behn), and within the next few days, the young prince is introduced to many miracles of nature and makes some new friends in Faline (Cammie King) and a skunk whom Bambi innocently names Flower (Stan Alexander). As time passes, Bambi enjoys the pleasures of the meadowlands, experiences his first winter with its joys (snow and ice) and discomforts (lack of food), and he becomes increasingly aware that one distinct enemy is man who makes abrupt entrances into his world and must be avoided at all costs.

Based on Felix Salten’s children’s book, the script for Bambi incorporates the book’s story plus adds some new characters. Through it all, the Disney artists have not done “cute” for cute’s sake but rather instilled distinct personalities into these creatures that make them lovable albeit flawed creatures. Dialogue is kept to a minimum while the artists allow the majesty of nature and the glorious Frank Churchill/Edward Plumb score to sweep the viewer through the episodic story that covers basically two years in the life of these woodland characters. The impressionistic animation is some of the finest ever created, and sequences like Bambi’s struggling with an ice pond or the thunderstorm sequence which brings forth memories of Disney’s Oscar-winning short The Old Mill combined with the superb tune “Little April Shower” finds the studio craftsmen at their zenith. Bambi’s clash with a rival for Faline’s affections is done in masterful bold colors and expressionistic shadows symbolizing the dark, fiery emotions at play (most of the film has been drawn in softly pastoral pastels and watercolors) representing another superlative sequence in a movie crammed with them.

Bambi is not a musical even though it has a song score consisting of four numbers, the best of which comes after Bambi and Faline have mated, the beautiful “I Bring You a Song,” one of the most underrated melodies in the entire Disney canon. But music plays a more important role in helping the film achieve greatness than in some of the earlier features as no character sings in the film (Dumbo had begun this implementation with songs performed on the soundtrack to point up emotional peaks in the story, though there were also musical numbers in the film sung by characters; there is none of that in Bambi). The musical themes for the main characters and the ominous theme for man (who is never seen but whose presence is always felt whenever he’s near) give the film a depth of feeling that live action movies could be proud to possess. Indeed, one of the Oscar nominations for Bambi was for its original score for a dramatic picture.

And the geniuses who cast the charming and delightfully real children who voiced the animals in their youthful incarnations should have been given raises for their sterling efforts. They’re completely real in their line readings making the little bit of dialogue that is present some of the most memorable in all Disney films. Once the animals grow up, we recognize voices like Frankie Darro and Sterling Holloway, but the film’s early scenes with the animals at their youngest give the movie a lasting impact still as fresh and funny today as it was more than half a century ago.

This appears to be the same high definition transfer that was presented in 2011 for Bambi’s first release on Blu-ray. Thus, the elimination of film grain and the smoothing of the image are carried into this new release. (For a glimpse at what the original film looked like, watch the original theatrical trailer included among the bonus features.) Even with this use of digital noise reduction, the film’s 1.37:1 theatrical aspect ratio is faithfully reproduced in this 1080p transfer using the AVC codec. Boasting no artifacts of any kind (including banding or color fluctuations), the image is hypnotically beautiful. Lines are strong and colors are pastel when they’re supposed to be and bolder at opportune moments. And there is still plenty of detail to be glimpsed in the drawings from tree bark to water droplets. The film has been divided into 25 chapters.

The disc offers two English soundtrack options: DTS-HD High Resolution 7.1 and the original theatrical track in Dolby Digital 2.0 mono. The original track is louder in volume and much more forward sounding and may be the preferred track for many, but it can’t match the finesse found in the expanded home theater mix. The bit meter reads this DTS-HD HR track at a constant 2.0 Mbps, and it sounds beautifully rich as the orchestral score and some echo effects get placed in the fronts and rears to impressive impact. True, the thunderstorm sequence doesn’t contain the power that a modern soundtrack would have (the LFE channel isn’t going to be taxed much), but the booming of thunder and the crack of lightning can certainly be heard in the surrounds. Man’s gunshots which ring out occasionally don’t have great pop to them. But the dialogue comes through nicely in the center channel, there is no hiss or other age-related artifacts to spoil the presentation, and the final product is more than acceptable.

Not all of the bonus material has been carried over from previous DVD and Blu-ray releases. Here’s what’s on this Blu-ray disc:

DisneyView: the film may be viewed with black pillarbars or with artist Lisa Keene’s side panels which change during the film.

Studio Stories: Bambi (4:56, HD): a 1956 audio track featuring Walt Disney talking about the difficulties Bambi presented to his team and how the challenges were met.

Africa Before Dark (5:50, HD): a silent-with-music Oswald the Rabbit cartoon.

The Bambi Effect (3:00, HD): illustrates how drawing for real life and animated effects in today’s animated films can be traced back to Bambi.

The Classic Bonus Material carried over from previous releases:

Bambi the film is a perfect motion picture, though many won’t find this Blu-ray release quite perfection: purists may object to grain removal or color variations from earlier releases. With the wonderful selection of bonus material and the moodily colorful picture and far better than average sound available, those who don’t already have it should be happy to add this high definition rendering of one of Disney’s greatest films to their collections. Highly recommended! 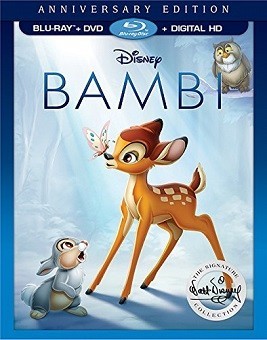