Forum List What's new Dark Style Change width
Log in Register
What's new Search
Menu
Log in
Register
Navigation
Install the app
More options
Dark Style
Close Menu
Posted on January 5, 2019 by Timothy E
You are using an out of date browser. It may not display this or other websites correctly.
You should upgrade or use an alternative browser.
Recommend to fans of film noir 4 Stars

Jeff Bridges, Dakota Johnson, and Cynthia Erivo lead an all-star cast in Bad Times at the El Royale, a 1969 set film noir written, produced and directed by Drew Goddard(The Cabin In The Woods).

“The El Royale is a bi-state establishment.  You have the option to choose a room in either California or Nevada.”

So says the concierge in the official tour of the lobby of the hotel.  The El Royale Hotel is located in Lake Tahoe straddling the border between California and Nevada.  In 1969, this obscure casino is past its prime and starting to go to seed as a group of characters converge at the hotel with tensions rising to a boiling point.  The El Royale has declined so far that it seemingly has only one employee, concierge Miles Miller(Lewis Pullman).  Although the El Royale is fictitious, it is inspired by the erstwhile Cal Neva Lodge & Casino which also straddled the border between the two states, and which was actually owned at one time by Frank Sinatra, Dean Martin, and Sam Giancana.
Father Flynn(Jeff Bridges) is a priest checking into the hotel because his first choice was booked.  Darlene Sweet(Cynthia Erivo) is a talented backup singer who has never made it big, and is staying at the El Royale because it is cheaper than staying closer to her gig in Reno.  Seymour Sullivan(Jon Hamm) is a vacuum cleaner salesman seeming to be in no rush to go anywhere.  Emily Summerspring(Dakota Johnson) is a mysterious and jaded woman. Appearances can be deceptive at the El Royale, as no one is whom or what they seem, which is appropriate to the noir genre.  Russell Crowe was originally cast as vacuum salesman Seymour Sullivan before Jon Hamm took up the role.  The cast also includes Chris Hemsworth(Thor) as a Manson-like cult leader, Nick Offermann(Parks and Recreation), Shea Whigham(Boardwalk Empire), Manny Jacinto(The Good Place), William B. Davis(The X-Files) and Jim 0’Heir(Parks and Recreation).
Bad Times at the El Royale builds up at a somnolent pace during its first hour as characters are introduced and interact among one another before their pasts and true motivations become known.  Clocking in at nearly 2 and a half hours in length, Bad Times at the El Royale is not a fast-paced film, but it has its rewards in the second half in action and conflict.  Written, produced, and directed by Drew Goddard(The Cabin In the Woods), Bad Times at the El Royale uses its conceit of a casino hotel divided down the middle between 2 states as an allegory of good versus evil.  It is appropriate that the dual wings of the hotel seem to branch out from the jukebox at the center of the lobby, as the soundtrack is almost its own character in its creation of mood and atmosphere in the film.  The producers actually comment in the special features that the songs selected for the jukebox for inclusion in the film were designated in the script and were not considered subject to replacement, such that the studio was told up front that obtaining rights to the songs for the film was an all-or-nothing condition of purchasing the script, which was purchased on spec by Twentieth Century Fox.  The exquisite original score composed by Michael Giacchino(Lost, The Incredibles) also deserves mention in its creation of mood in the film.  Giacchino’s original compositions here were clearly influenced by Bernard Hermann(Vertigo, Psycho), and the result is a musical score that builds a sense of urgency in the events at the hotel.

Bad Times at the El Royale appears on 4K UHD and Blu-ray disc in its original 2:39.1 aspect ratio.  The 4K UHD disc displays the film  in 2160p using the HEVC codec.  Video presentation is flawless on this film, which was actually produced on film, rather than digitally, by use of anamorphic lenses made in the 1960s.  The screen compositions by cinematographer Seamus McGarvey(Atonement, Anna Karenina) are served well on the 4K UHD disc with solid blacks and sublime shadow detail.  The motley pigments of the color scheme carefully selected for the sets by art director Michael Diner and production designer Martin Whist are likewise served well in 2160p resolution.

The English Dolby Atmos audio is a joy on this UHD disc.  Gunfire and explosions are delivered with sonic punch, and the ambient sounds of rainfall and thunder are encompassing, with nice use of directional audio at discrete intervals.  The pop music selections from the jukebox at the center of the hotel are presented with higher fidelity and clarity than they ever must have enjoyed in their day.  Likewise, the strident musical compositions by Michael Giacchino are not given short shrift either in this magnificent audio presentation.

Special features are included only on the blu-ray disc and include all of the following:
Making Bad Times at the El Royale(28:35):  Writer and director Drew Goddard is joined by cinematographer Seamus McGarvey and the production designers in this very interesting featurette about the making of the film.
Gallery:  Viewer may select auto advance or manual advance to sort through the gallery of images from the exquisitely designed set of the El Royale.  This feature is actually recommended to anyone interested in further exploring the exquisite set decoration and production design of the film.
Teaser trailer(2:05):  Trailer for the film set to the Isley Brothers’ “This Old Heart of Mine.”
Theatrical trailer(2:03):  Trailer set to Franki Valli’s “Can’t Take My Eyes Off You.”
Sneak Peek(5:59):  Trailers for Widows, Red Sparrow, and Sorry to Bother You.
Also included is paper insert with validation code for the film on FoxDigitalMovie.com or on the Movies Anywhere app.

Bad Times at the El Royale is an entertaining modern film noir(taking place 50 years ago) that builds suspense at its own pace but rewards the audiences’ patience for the most part in its resolution.  Some members of the first-rate cast reportedly agreed to lower pay scales on this film in exchange for creative freedom under director Drew Goddard.  The video and audio presentations on the 4K UHD disc are flawless.  The special features are interesting and recommended, particularly the Gallery which allows for closer exploration of the exquisite art design and set decoration of the functional set of the hotel.  Bad Times at the El Royale on 4K UHD disc may warrant repeat visits to its locale.

It's a shame this movie is so overlooked. I found it quite lovely. I think the audience that would enjoy it aren't paying much attention to movies nowadays though.

I don't know about that. The film was marketed heavily as being a Tarantino-esque thriller. I don't believe it lived up to that.
D

Sam Posten said:
I don't know about that. The film was marketed heavily as being a Tarantino-esque thriller. I don't believe it lived up to that.
Click to expand...

I’m looking forward to seeing this film- I blind-ordered it. If it in any way resembles QT’s work, I know I’ll have a good time watching it.
You must log in or register to reply here. 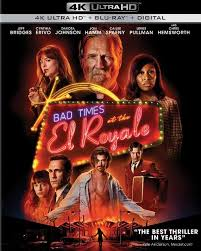