The cartoonish characters at the heart of Jon Lucas and Scott Moore’s Bad Moms may exhibit facets of real life people, mothers or otherwise, whom we encounter in everyday life, but like so many modern-day comedies, everything’s exaggerated for comic effect turning the world we’re viewing into nothing like what we typically experience and ultimately trying one’s patience with all the distortions and ridiculous behaviors in the service of overdone satire.

The cartoonish characters at the heart of Jon Lucas and Scott Moore’s Bad Moms may exhibit facets of real life people, mothers or otherwise, whom we encounter in everyday life, but like so many modern-day comedies, everything’s exaggerated for comic effect turning the world we’re viewing into nothing like what we typically experience and ultimately trying one’s patience with all the distortions and ridiculous behaviors in the service of overdone satire.

Overworked and under-appreciated by her husband (David Walton) and two children (Oona Laurence, Emjay Anthony), Amy (Mila Kunis) finally decides that enough is enough, kicks slacker hubby to the curb, makes her kids take responsibility for their own homework and household chores, and becomes what the snooty mean mothers at the school would call a “bad mom.” With two other fed-up compatriots Carla (Kathryn Hahn) and Kiki (Kristen Bell), the trio begin doing things they want to do to lessen the stress in their lives, but their rebellion doesn’t go unnoticed by PTA President Gwendolyn (Christina Applegate) who is used to all the mothers kowtowing to her every whim and following her every directive. She sees to it that Amy’s daughter is benched on the school soccer team and does everything she can to shame Amy into returning to the status quo. But Amy declares her own war against Gwen and decides to run for PTA President to put an end to the unnecessary demands Gwen has placed on the parents.

Jon Lucas and Scott Moore have both written and directed this satirical farce going at every turn for exaggeration rather than intelligent restraint. There are a lot of slapstick antics and pratfalls sprinkled throughout the movie (Kathryn Hahn takes a beauty of a headlong fall in one of the more memorable spills orchestrated in the movie), and rampant profanity is part of everyone’s everyday language (including the middle school-aged children). While there is a core of truth to the writer-directors’ contention that today’s parents trying to balance impossibly busy work schedules and domestic life often find themselves at the breaking point and ready to explode, the movie often falls back on the tired tropes of the domestic comedy genre for its laughter and set-ups (the slacker dad who expects to be waited on hand and foot – two are present in this movie, the “mean moms” who look down on anyone who can’t present a perfect façade to the world, the idiotic school principal who won’t stand up to the Nazi-like PTA President), and when Amy goes looking for some sexual release, who does she find but the school’s most gorgeous and eligible widower (Jay Hernandez). The directors stage a couple of comic montages that fall kind of flat: a chaotic, drunken spin around the supermarket by the three newly liberated “bad moms” and the frat house-like election party attended by all the overworked moms with the promise of cheap wine.

As the loud, braying mom Carla, Kathryn Hahn walks away with the movie. She’s always outrageous and over-the-top (unlike Kristen Bell and Mila Kunis whose characters have to be drunk to act out), and while she’s the most cartoonish of the three bad moms, she’s also the funniest by far. Bell is the least successful, a rather bland naïf in a sea of vipers who finally summons up the courage to put her dictatorial hubby in his place (which we could see coming from a mile away). Kunis runs hot and cold in the movie: tired of being taken for granted but constantly apologizing for her bad behavior sending out definite mixed messages. Christina Applegate’s monster mom Gwendolyn is also an exaggerated caricature, and we wait for a comeuppance that is so mild when it comes that it hardly registers. Jada Pinkett Smith as her second-in-command is likewise underwhelming. Jay Hernandez offers a hunky presence but not much else to the proceedings, and Wendell Pierce as the wimpy school principal is rather ridiculous in his utter impotence. Wanda Sykes has an amusing cameo as a marriage counselor.

The film’s theatrical aspect ratio of 2.40:1 is faithfully rendered in this 1080p transfer using the AVC codec. Sharpness is generally excellent except for a few shots that seem as if the focus puller wasn’t paying attention. Color values are excellent with believable and appealing skin tones. Contrast has been consistently applied making for a very watchable image. The film has been divided into 20 chapters.

The DTS-HD Master Audio 7.1 sound mix puts most of the emphasis on the front channels. Dialogue, of course, is directed to the center channel, and atmospheric effects have much more presence in the fronts than in the rears. The music score by Christopher Lennertz and a succession of rock and rap tunes do get spread through  both the front and rear soundstages to very good effect.

Deleted Scenes (16:36, HD): four different sequences feature a plethora of improvisation by some of the actors searching for the right comic lines for specific moments.

Interviews with the Cast and Their Moms (23:52, HD): Mila Kunis, Kristen Bell, Christina Applegate, Jada Pinkett Smith, Kathryn Hahn, and Annie Mumolo (who plays a third mean mom Vicky) and their mothers talk about the challenges each has faced being a mother to one or more children. Excerpts from some of these interviews are also shown during the end credit sequence of the movie.

Grossing more than five times what it cost, Bad Moms was a considerable box-office hit in this country proving that there is a definite audience for this kind of exaggerated comedy of manners. It makes its points and it occasionally earns its laughs, but its hyperbole will not be for all comic tastes. A rental might be the smarter idea with this one. 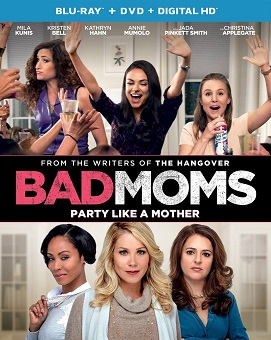