Bad Boys: 3.5/5
When $100 million in heroin is stolen from the Miami Police evidence lockup, detectives Marcus Burnett (Martin Lawrence) and Mike Lowrey (Will Smith) are on the case to not only save the department from embarrassment before Internal Affairs officer Alison Sinclair (Marg Helgenberger) brings in the Feds to investigate what appears to be an inside job, but also to save their case as it was their evidence that was stolen. To make matters worse, Lowrey’s informant Maxine Logan (Karen Alexander) is murdered by a member of the crew that pulled off the heist, and Burnett has to impersonate his partner as the two provide protection against the only witness to Maxine’s murder, Julie Mott (Téa Leoni). Of course, Burnett and Lowrey have a captain that is constantly barking orders at them (Joe Pantoliano) and two junior detectives under their wing to bust their chops (Nestor Serrano Julio Oscar Mechoso). Drug smuggler and dealer Fouchet (Tchéky Karyo) and his goons are out to get Julie and anyone else who stands in his way before his big deal goes down.

If anything, Bad Boys proved to be a good training ground for first-time director Michael Bay. The opening heist sequence is rather similar to the one that opens The Rock (Bay’s next film), with the latter film’s heist having more flash. The film also helped to make Will Smith a bona fide movie star (Independence Day would solidify the status one year later), and the chemistry between Smith and Lawrence is really what elevates this (and its sequel) above the derivative and lackluster material. Much of what appears in Bad Boys has been seen before, done much better in even better movies, such as the Lethal Weapon series, Peter Hyams’ Running Scared, etc. The film’s occasional misogynistic tone, often played for laughs, is what often drags the film down.

Bad Boys II: 2.5/5
Eight years later, after many delays, a sequel, Bad Boys II, arrived in theaters. Made on a much larger budget ($130 million compared to the first film’s paltry $19 million), the result was a bigger, louder, and often bloated retread of the first film. Burnett and Lowrey are now working undercover with a Federal Task Force tracking the flow of ecstasy into Miami. The plot is preposterous, as Lowrey is secretly dating Burnett’s sister, Syd (Gabrielle Union), who is secretly working with the DEA. The three eventually try to take down Cuban drug lord Tapia (Jordi Mollà), as does Russian gangster Alexei (Peter Stormare) as vengeance for Tapia’s gang taking out members of his gang, or something like that. With a running time of nearly 2.5 hours, the movie runs about 40 minutes too long, and if you thought the first Bad Boys was misogynistic, this sequel is even more so. Not even the bickering chemistry of Will Smith and Martin Lawrence, which gets even more profane and even tiresome this time around, can save Bad Boys II. And how many times is Michael Bay going to use his now signature freeway chase that we have seen in Transformers, The Island, etc.?

Sony continues to put out excellent 4K UHD editions of their catalog, and this double-bill is no exception. Of the two, Bad Boys possibly benefits the most, as this is likely a true 4K scan of the original 35mm element (retaining the film’s theatrical aspect ratio of 1.85:1) with an HDR10 pass. There is much more detail on display (facial features, set design, etc.), as well as film grain (which Bay loves). Colors are more vivid even when they are bathed in orange. Blacks are deep and inky, retaining solid shadow detail throughout.

Bad Boys II is a smaller upgrade, but still an improvement over the previous and excellent Blu-ray. Although the press release states both films were 4K scans from the camera negatives, Bad Boys II was completed as a 2K digital intermediate back in 2003, so there is some doubt as to whether or not this is a 2160p upscale, but the transfer does retain the film’s theatrical aspect ratio of 2.39:1. Details are slightly more refined, but there isn’t a whole lot to improve upon. Where the disc really excels is in contrast and black levels thanks to HDR10, extremely noticeable during the opening surveillance sequence at night, with incredibly deep shadow details. Colors are slightly more vibrant and stable, often bathed in blue. Sony really knows how to handle catalog titles.

Both films have been given new Atmos mixes. Bad Boys receives a modest upgrade, with sounds more precisely placed around the room, but no real sense of full immersion that one would expect in a Michael Bay film. Dialogue is clear and mostly understandable throughout, LFE is adequate but, again, one expects more from a film by Bay.

Bad Boys II, on the other hand, is definitely reference-quality Atmos track, and what one expects from a Michael Bay film. LFE is punchy, sounds are more accurately placed around the room, and a subtle sense of immersion, yet no real discrete overhead effects. Dialogue is clear and understandable throughout.

The UHD discs contain no bonus material whatsoever. I am growing tired, though, of Sony’s odd menu designs on their UHD discs. Why do I need to leave the movie to change audio or subtitle settings? I am also not a fan of the package design used for this release. Basically, each movie is housed in a 2-disc digipak, which then insert vertically into a hard cardboard sleeve with stills from each film on either side, and then a flimsy paper overlay (with all of the disc specs and liner notes) sits atop of the sleeve. Let’s just say that trying to place that on my shelf without the overlay slipping out is annoying.

Anyway, all of the extras can be found on the Blu-ray editions included in this set (these are the same Mastered in 4K editions released in 2015).

Production Diaries (480i; 67:10): At first, I thought this disc had the wrong behind the scenes documentary, but fear not, there is just a lengthy backstory on the production of the first film before leading into the making of the second.

Digital Copy: An insert contains a code to redeem digital copies of both films thru Movies Anywhere or directly thru Vudu. I redeemed my code on Movies Anywhere, which provided 4K UHD versions on Amazon Prime and Google Play Movies, and HD on Vudu and FandangoNow. I do not own an Apple TV or XBOX One, so cannot confirm what resolution is available on iTunes or Microsoft Movies. Apparently, Sony has removed the option to include their ULTRA 4K service in code redemption (although I assume if I had redeemed on Vudu directly, it would have transferred to their service).

The first Bad Boys can be a fun diversion, while the second can be a chore to sit through in one sitting. Sony’s 4K presentation on these discs are outstanding, and worthy of upgrading. 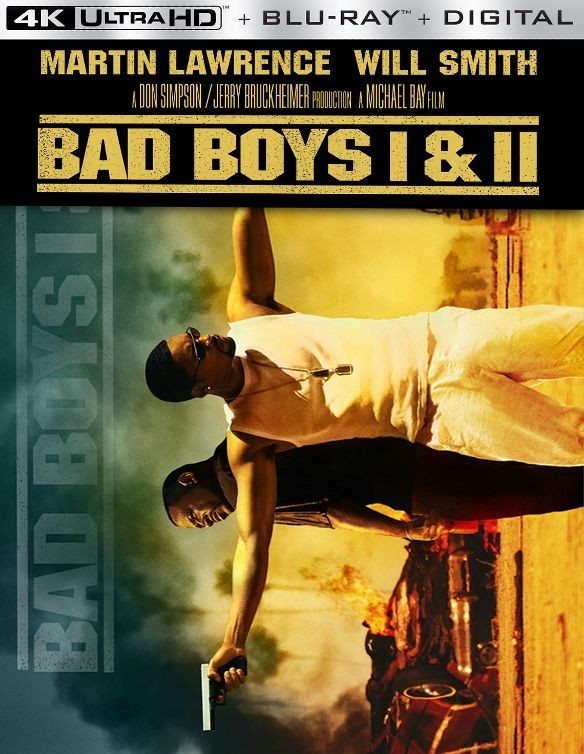