James Dunn turns on the charm as a hapless new husband in John Blystone’s comedy-drama Bad Boy. Not even running an hour and likely slated for the bottom half of double bills in its day, Bad Boy is a pleasurable entertainment peopled with attractive leads and just enough of a plot to keep us interested for its brief running time.

James Dunn turns on the charm as a hapless new husband in John Blystone’s comedy-drama Bad Boy. Not even running an hour and likely slated for the bottom half of double bills in its day, Bad Boy is a pleasurable entertainment peopled with attractive leads and just enough of a plot to keep us interested for its brief running time. Better direction and more expanded adventures for our luckless hero could have expanded the film to a more comfortable and worthy length, but as is, it’s an agreeable enough way to pass an hour.

Pool hustler Eddie Nolan (James Dunn) really can’t be beaten in the billiard parlor, but when he starts to get serious with girl friend Sally Larkin (Dorothy Wilson), she informs him her parents will never give her permission to marry if her husband-to-be doesn’t have a steady, respectable job. Her fears are further enhanced when Eddie meets the parents and learns Sally’s father (John Wray) has been one of his biggest marks at the pool hall. Eddie, of course, is willing to do anything to make Sally happy, but he has no luck at all in finding work, not having a college degree or any other practical skills being a particular nuisance. What’s worse, Sally’s mother (Beulah Bondi) is determined to fix her daughter up with an eligible suitor, so banker Bob Carey (Allen Vincent) comes calling and is quickly smitten with the adorable Sally.

Based on Viña Delmar’s story, the screenplay by Allen Rivkin is quick and efficient never letting Eddie’s lack of success in finding gainful employment weigh down the film’s light, bouncy mood. The film’s tone is also helped by a series of peppery comic scenes featuring Eddie’s quick-witted landlady Mrs. Harris (Louise Fazenda) who manages to steal every scene she’s in. The couple’s secret marriage might also have been a greater source of drama and conflict if writer Rivkin had plotted the film for a more serious slant on the story, but Eddie’s thwarted efforts to land a position keep things on the happy side: we see that he’s a natural salesman strolling through a sporting goods section of a department store and managing to assist customers and sell a pool table with just his natural ebullience and open-faced friendliness (surprising a college degree would be required for a salesman’s job in 1935). The movie even manages to work in a lovely little song for James Dunn and Dorothy Wilson to sing “As I Live and Breathe,” a Lew Pollack-Paul Webber tune that forms the basis of another amusing scene as Eddie tries his luck on a talent show using the couple’s “song.” True, the film’s denouement happens way too quickly and isn’t sufficiently established to maximize its drama, but that’s forgotten when memories of those opening pool hustler tricks that James Dunn pulls off without a hitch come to mind. Had director John Blystone been a little more creative with the camera, the shots could have been even more impressive.

Even a decade before he’d win his Academy Award for A Tree Grows in Brooklyn, we can still recognize James Dunn’s well-meaning sweetness with a rascally underbelly in his performance as Eddie Nolan. And he has a wonderful camaraderie with Dorothy Wilson as his loving girl friend and later wife. She’s the perfect 1930s heroine: not wanting to go against her parents but determined to have the life she wants. Louise Fazenda is a show all to herself as landlady Mrs. Harris while Beulah Bondi manages to fake her heart ailments quite well to get what she wants as Sally’s duplicitous mother. John Wray gets taken for an amusingly frustrating ride in the pool hall as Mr. Larkin, and Victor Kilian and Luis Alberni as Eddie’s friends Sid and Tony are full of character in small but choice roles. Look fast and you’ll see John Carradine as one of the lodgers in an unbilled cameo appearance.

The film is framed in its original 1.37:1 theatrical aspect ratio. Sharpness is basically average or a little above in the transfer, and the grayscale features crisp whites but only mediocre blacks. Contrast has been consistently maintained, but the transfer appears completely untouched with plenty of dust and dirt specks and with the reel change markers firmly in place. The movie has been divided into chapters every ten minutes so this film has 6 chapters.

The Dolby Digital 2.0 sound mix is decoded by Dolby Prologic into the center channel. A rather persistent hiss is present through the entirety of the (admittedly brief) running time, and there are also pops and some crackle present too, especially at the reel changes. Otherwise, though, despite an elevated volume level which will require some adjustment, dialogue, sound effects, and music blend together well enough not to step on each other’s toes during the presentation.

There are no bonus features included on this made-on-demand disc.

Bad Boy represents the kind of dramedy of the era which was particularly popular (radio dramas of the era featured similar mixes of comic and tragic elements). While Bad Boy isn’t particularly distinguished, it’s a moderately entertaining example of the entertainment of the era. Typically, the Fox Cinema Archive treatment is regrettably lackluster. 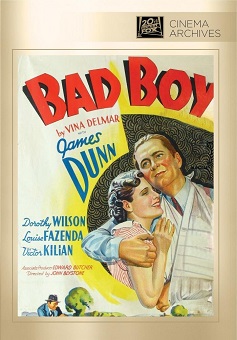