Forum List What's new Dark Style Change width
Log in Register
What's new Search
Menu
Log in
Register
Navigation
Install the app
More options
Dark Style
Close Menu
Posted on February 28, 2021 by t1g3r5fan
You are using an out of date browser. It may not display this or other websites correctly.
You should upgrade or use an alternative browser.
Sizzling Tennessee Williams adaptation debuts on Blu 4.5 Stars

Although his name has been obscured over the years, Elia Kazan was – and still is – considered one of the most important directors working in Hollywood during the 1940’s and 1950’s. This was largely due to his efforts on 2 Best Picture winning movies (1947’s Gentleman’s Agreement and the immortal On the Waterfront in 1954) and A Streetcar Named Desire (1951), which launched Marlon Brando into stardom; he returned to Tennessee Williams territory a few years later with Baby Doll. Warner Bros. has given the movie its Blu-ray debut through their Warner Archive line.

In a decaying mansion outside of a small town in Mississippi, cotton gin operator Archie Lee Meighan (Karl Malden) lives with his child bride Baby Doll (Carroll Baker), eagerly awaiting the day he can consummate their marriage on her 20th birthday. However, he has fallen on hard times, so he arranges to have the gin of his rival Silva Vaccaro (Eli Wallach) torched in order to drum up business. When Vaccaro tries to get Archie to confess to his crime, he ends up falling for Baby Doll, who in turn finds herself charmed by Vaccaro’s affection. This sets up a love triangle that’s about to get hotter than a Mississippi heat wave…

Part drama and part black comedy, Baby Doll is a scorching adaptation of a Tennessee Williams play (27 Wagons Full of Cotton) that succeeds on all fronts. Director Elia Kazan wrings out every last drop of implied sexuality and tension from the script and makes great use of the actual Mississippi locations; he also manages to balance the dramatic and comedic elements in near perfect harmony to further play out the tension in the story. However, this didn’t come without controversy: a movement from the Catholic Legion of Decency during its theatrical release (and even before it) managed to hobble the film at the box office due to it successfully being pulled from some theaters due to some of that implied sexuality. Despite that, the movie does have fantastic performances from the three leads while also being well shot and scored to match the mood of the story. Controversy aside, Baby Doll is still one of the best movies of the 1950’s due to the boldness in which it depicts some of the sexuality in a subversive manner in an era which expressing it on film so openly was largely verboten.

In one of her first leading roles, Carroll Baker earned an Oscar nomination for Best Actress and a Golden Globe Award for her performance as the eponymous Baby Doll; it’s a role that has largely defined her career and also enshrined the baby doll nightgown in pop culture lore as well. Karl Malden also does a great job as the bigoted and alcoholic Archie, trying to salvage his failing business while awaiting the consummation of his marriage; Malden was no stranger to Williams’ work, having already earned an Oscar for Best Supporting Actor in the screen adaptation of A Streetcar Named Desire (1951), also coming under Kazan’s direction. Making an impressive screen debut is Eli Wallach as the rival gin owner Vaccaro; while initially showing apprehension in taking the part due to being unfamiliar with acting on film, he successfully parlayed this into a long and fulfilling film career which culminated with an Honorary Oscar in 2010. Rounding out the cast here are Mildred Dunnock as Baby Doll’s senile Aunt Rose (she would earn an Oscar nomination for Best Supporting Actress here), Lonny Chapman as Vaccaro’s friend and associate Rock and Madeleine Sherwood and Rip Torn (both making their film debuts here also) in uncredited parts as a doctor’s assistant and a dentist respectively; several Black actors from Benoit, Mississippi (where the film was shot) were utilized in bit parts while R.G. Armstrong lent his voice to Townsman Sid in an uncredited role.

The film is presented in its intended 1:85:1 aspect ratio, taken from a brand new 4K transfer created for this release. The gray scale here is faithfully represented here with inky blacks and fine details standing out in addition to organic film grain; there’s very few to no instances of dirt, scratches, tears, fading, vertical lines or reel markers present here. This is by far the best the movie will ever look on home video and easily surpasses the previous Warner DVD in this department.

The film’s original mono soundtrack is presented on a 2.0 DTS-HD Master Audio track for this release. The dialogue, sound mix and Kenyon Hopkins’ jazz influenced score are all given strong and faithful representations with little to no problems like distortion, crackling, popping or hissing present here. This is by far the best the movie will ever sound on home video and easily bests the previous Warner DVD.

Baby Doll: See No Evil (12:52) – Carried over from the previous Warner Bros. DVD, this brief featurette looks at the film’s production and its controversial release; those interviewed include Carroll Baker, Eli Wallach, Karl Malden and film historian Dr. Drew Casper.

Bold and provocative in its time, Baby Doll still maintains its potent brew of drama and black comedy due to the strong performances of its three leads and exemplary direction from Elia Kazan. Warner continues to demonstrate why the Archive line is among the best in the home video business, with another terrific HD transfer of the movie. Very highly recommended and well worth upgrading from the previous DVD release.

Very much interested in seeing this again with this stellar video rating given- I saw it years ago I think at Film Forum here in NYC in a less than stellar print plus I’m a fan of all 3 actors.
You must log in or register to reply here. 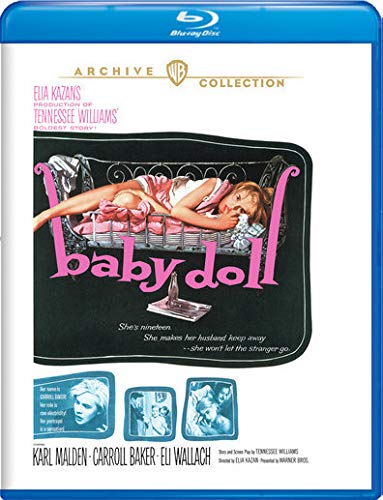