Unbeatable performance, for a price 4.5 Stars

AudioControl is a brand oft discussed by installers and professionals in the home theater industry, yet rarely by consumers. The reason for this is that AudioControl almost exclusively sells their products through system integrators who design high end home theaters for the elite. AudioControl’s products have a sterling reputation in the industry and often come with features that are impossible to find in consumer AVRs and processors, and they are priced accordingly.

I ultimately stumbled upon this product when hunting for a Dolby Atmos capable processor with 4K HDR support and Dirac Live room correction. This particular combo was very hard to find, but thankfully AudioControl saw the need for just such a product and brought the 6th generation Maestro processors to market.

The Maestro line of processors has been around now for six generations, a decent chunk of AudioControl’s 40 year history. The Maestro M5 arrived for review alongside the Savoy G3 amplifier, a class H design that is meant to perform well in the home theater. Both products arrived packaged in very durable and thick double boxes, and were wrapped in thick plastic.

From an industrial design perspective, the Maestro M5 is an attractive yet minimalist processor. The quality of the Maestro M5 is obvious as soon as you hold it – having substantial heft and a very thick steel chassis.

The front panel features a horizontal row of buttons similar to Anthem products and an LCD is directly above these. To the right, a large volume knob with a chrome surround offsets an otherwise unassuming appearance.

The rear of the unit is densely packed, but not cramped, offering 7 HDMI inputs, 2 HDMI outputs, 12 balanced XLR outputs and the usual RCA, Coaxial and TOSLINK SPDIF inputs, alongside 12 unbalanced RCA preamp outputs, an FM tuber connection, USB and an ethernet jack. From a control perspective, the Maestro M5 shows its custom install roots by offering a serial (RS232) port on the back for integration into control systems, and also offers dual 12V trigger outputs and external IR connectors.

The built in OSD of the Maestro M5 is fairly basic, but gets the job done and won’t be visible much of the time, though I do wish at this price point that AudioControl had invested in a superior UI and a web interface, which is notably missing in comparison to more affordable yet more feature filled competitors like the Marantz AV8803.

While most of the features we have come to expect in high end processors and AVRs are present in the M5, it does ultimately feel somewhat surprising that cheaper competing products have a more extensive list of features, web interfaces and other bells and whistles.

Once you’ve inserted the Maestro M5 into your system and connected the cables (yes, this part is just as annoying as any other processor), the fun begins.

The process of calibrating via Dirac Live requires a computer on the same network as the M5, as well as a USB microphone. AudioControl includes a pretty basic uncalibrated mic with the unit, but this feels like a pretty poor decision when you’re paying this much for the processor. Since I already happened to have a calibrated MiniDSP UMIK-1 microphone on hand, I used that instead. 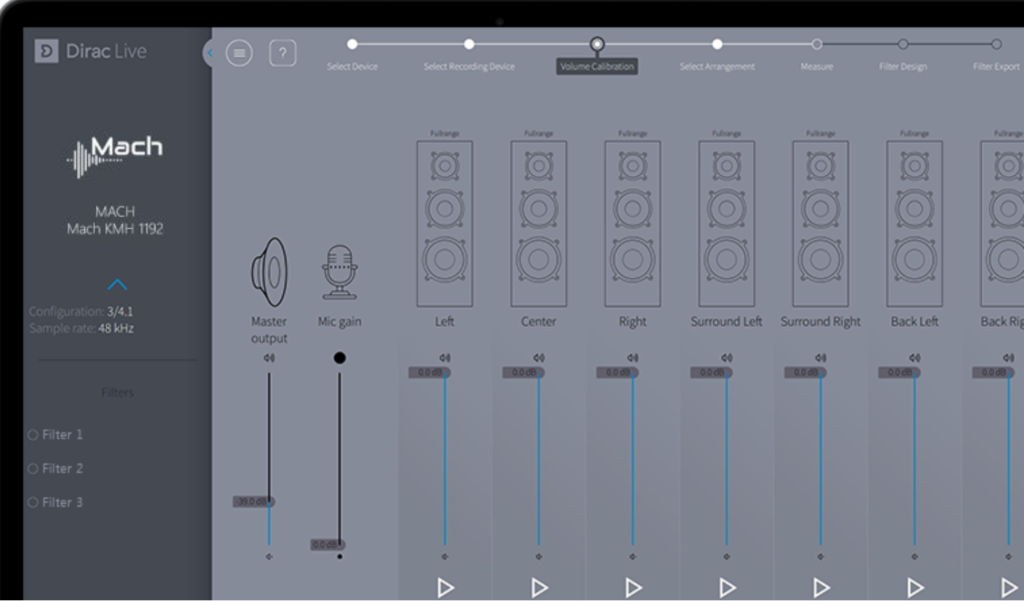 After connecting the microphone and launching the Dirac Live software, I selected my microphone, and then the software searched my network for compatible processors, finding the Maestro M5. Once this is done, the calibration routine will launch, playing test tones through all your channels, allowing volume levels to be tweaked so that levels are approximately matched. Once levels are matched, you can kick off a round of measurements, that will play test tones and record input through the mic, similar to Audyssey. Once you have finished taking measurements, Dirac will calculate recommended filters, and allow you to make any tweaks if so desired. I made a couple of adjustments to the top end to achieve my desired response, saved my session so I could easily make changes later, and click the Save button to send these curves to the Maestro M5.

I did notice that even though these curves were sent over, I still had to make a couple of minor tweaks to levels after the fact using my SPL meter, as the measurement mic required the subwoofers to be turned down for calibration.

My system was recently upgraded to Dolby Atmos just prior to this review, and consists of the following equipment:

I started my review by playing a few Dolby Atmos demo loops from my NAS via the HTPC, which supports Atmos in Kodi. Upon starting the Amaze demo, I immediately noticed a a sense of low end heft and tightness to the bass that was absent with my Audyssey XT32 calibrated Marantz AV8802A. I noticed that some muddiness around 60Hz that I have had a very hard time taming despite room treatments was significantly improved. On the top end, I noticed that the amount of air and space in the sound was about the same as my Marantz, though the mid-range was slightly more recessed. I pulled my laptop back out and made a couple of tweaks to the target curve, removing some cuts in the mid-range area and re-loaded my target curves to the M5 and tweaked levels.

I restarted the Amaze demo and was greeted by the same low-end heft, but now the mid-range was much more like I was used to, open and clear, well balanced with the rest of the audio presentation. Now that the mid-range had been corrected, I also noticed that the sense of space in the mix, especially the depth of the soundstage was significantly improved. Positional queues such as raindrops overhead were now more localized and sounded less like a recording and more like the real thing, with more natural timbre and placement.

I moved on from the Atmos demo loops to stereo music, beginning with the late Chris Jones performing No Sanctuary Here. This track has an incredibly authoritative guitar line and really requires that the subwoofer and mains be well integrated to sound natural as the lower registers of the guitar reach well below the crossover.

The integration between my subs and mains was excellent, without any directional bass coming from the subs or variations in volume or timbre at the crossover frequency. Jones’ voice was presented directly between and slightly behind the left and right speakers, exactly where it is heard on a good headphone setup, indicating that the calibration had dialed things in very well.

I followed No Sanctuary Here with a variety of tracks, including B-Tribe’s Volume 6, and some bass heavy electronic music such as Bassnectar’s Paracosm, and Birds of Paradise album Flight Patterns. Electronic music in particular sounded excellent, with the tighter bass really improving the sense of impact and energizing the entire room.

While the M5 was in my system I spent a great deal of time listening to music of all genres and was never disappointed. The M5 was as capable as my Marantz in terms of raw sound quality, and once the calibration was enabled, clearly surpassed it.

From a video perspective, I didn’t notice anything spurious or unusual about the M5 at all, though I will comment that HDMI handshakes were significantly faster than with the Marantz, reducing the amount of time my Sony projector blanked out while handshaking from 3-5 seconds down to 1-2 seconds. Video playback was crisp and clear, with no visible artifacts in passthrough or converted mode, and HDR metadata was passed through flawlessly to my projector with one exception. I did find that the Apple TV 4K would not allow me to output 4K HDR content when the Maestro M5 was in the chain, while it worked fine through the Marantz or direct to the projector. Rather than contact AudioControl support about this, I chose to ignore it, as I was quite sure this was an issue on Apple’s end, and not AudioControl’s, as all my other sources worked flawlessly at 4K resolution with or without HDR.

Statement level products are always a costly investment for the home theater, offering a level of build quality, support and reliability that consumer grade gear can’t quite match. My own experience demonstrated exactly this, with my experience using the Maestro M5 being significantly more trouble free and reliable than with the Marantz, which frequently suffered HDMI handshake issues. The Maestro M5 did have a relatively plain and simple OSD, but ultimately no functionality in the OSD was missing – it was simply presented in a less fancy manner.

The one area where I really felt like the Maestro M5 was a step down from my Marantz was the lack of a web interface, as I routinely use this for remote volume control or setup functionality on the Marantz, and found having to do so manually on the OSD rather frustrating once I had swapped to the Maestro M5. These quibbles aside, there can be no question that the AudioControl Maestro M5 is the most bulletproof and trouble free AV processor I’ve had the pleasure of using. When you combine this with excellent AV performance and a fantastic calibration system in Dirac Live, it becomes more apparent why this unit can demand a price of  $5900. Is it expensive? Undoubtedly. It is worth it? When one considers bulletproof AV performance, state of the art calibration, a five year warranty and the fact that this processor is from an American company with a sterling reputation, the answer is an emphatic yes!

Interesting piece of equipment, which will never find a a spot in my house, or budget. I wonder how it compares to the Emotiva RMC-1, which will have Dirac Live, but also seems to have significantly more features most high-end user will want, but not the fancy integration features, and is about $1K less.

Emotiva has proven again and again that they struggle to deliver a reliable product in a timely fashion when it comes to AV processors. I think most folks who are willing to shell out this much are more concerned about reliability and availability. Early reports on the RMC-1 have been mixed.

Yeah, I definitely agree. I learned that myself. Even though I own many Emotiva pieces, I swore not to buy their processors again. That’s why I went with Marantz instead. I hoped it had gotten better. Even the Emotiva designed Sherbourn processor I had was always twitchy.
B

Hi Dave, fairly basic question here. I'm looking at adding the Maestro M5 ot my system. If it's installed in an equipment rack far distant from the TV, how can you do basic configuration if there's no app or web interface? I understand all the Dirac config can be done remotely (at the TV) but how do you do anything else? Thanks in advance for your thoughts...

You would need to use an IR repeater or blaster so you could use the remote in the room with your display unfortunately, there is no alternative.
B