Forum List What's new Dark Style Change width
Log in Register
What's new Search
Menu
Log in
Register
Navigation
Install the app
More options
Dark Style
Close Menu
Posted on March 29, 2016 by Matt Hough
You are using an out of date browser. It may not display this or other websites correctly.
You should upgrade or use an alternative browser.
Another entertaining season of this funny spy spoof 3.5 Stars

Things pretty much return to the normal if outlandish world of espionage for the nitwit undercover operative gang on the sixth season of one of TV’s brightest comedies Archer.

Things pretty much return to the normal if outlandish world of espionage for the nitwit undercover operative gang on the sixth season of one of TV’s brightest comedies Archer. Because there’s a new baby on board and some readjustments in coming from the world of international drug cartels that the team became involved with in the previous seasons, season six doesn’t offer a smooth ride for any of our heroes, but both their personal and professional efforts to return to their roots certainly keep the laugh quotient up to the show’s usual high standard with only one or two episodes which don’t measure up to the show’s best.

Though the team’s ISIS organization has been disavowed by the U.S. government, the CIA is willing to give the agents and their support group the chance to redeem themselves by carrying out dangerous missions on a free-lance basis, the agreement being that if they’re successful, it might lead to a full-time contract with the U.S. undercover agency. Of course, with the talented but always reckless Sterling Archer (H. Jon Benjamin) leading the missions, the chances of great success are minimal even when guided by his more level-headed baby mama and expert spy Lana Kane (Aisha Tyler). The missions carry the duo (and occasionally other squad members) to such far-off places as an uncharted Pacific Island, Switzerland, and Wales on missions ranging from rescues to assassinations and everything in between. There’s even a fun mission for the group at Area 51. Abetting the lead duo are the usual squad of suspects: gay agent Ray Gillette (Adam Reed), one-time accountant and now agent Cyril Figgis (Chris Parnell), suspicious, crack-headed house scientist Doctor Krieger (Lucky Yates) (who may or may not be a clone of himself), receptionist Pam Poovey (Amber Nash), and secretary Cheryl Tunt (Judy Greer). Also popping up this season are return visits from Sterling’s arch nemesis Barry Dillon (Dave Willis) and his former wife Katya Kazanova (Ona Grauer).

This season’s thirteen episodes feature a recurring role for guest star Christian Slater as the team’s CIA handler who has a decidedly acrimonious relationship with the team. Another delicious running gag involves Sterling’s mother Mallory (Jessica Walter) who is trying to reestablish the viable credentials for her agency but is being continually distracted by Archer and Lana’s baby A.J. whom she is often designated to babysit and about whom she makes a series of hysterical cracks about her “baby weight.” With Pam gaining back her weight from last season (when she was on a cocaine diet) and Cheryl back from the heights of country superstardom to be her regular ditzy self, things seem certainly back to normal especially with Cyril’s continuing to carry a torch for Lana and Ray’s continuing to lose various limbs in tragic accidents with the team. The season opens with a variation on the movie Hell in the Pacific and concludes with the show’s two-episode tribute to Fantastic Voyage as the team is miniaturized and injected into the bloodstream of a famous scientist trying to destroy a blood clot in his brain before it kills him.

The cast, particularly H. Jon Benjamin, Jessica Walter, and Aisha Tyler, are expert voice actors who wring all of the comedy out of their characters and have impeccable comic timing with their delivery of lines. True, the program pushes for comic effect by having most of the cast braying at one another to drive home their jokes (which can become less effective and more monotonous if one watches more than an episode or two at a time). The comedy is adult-oriented, however, and can be fall down funny in its concentration on the various characters’ mercenary natures, their constant craving for adulation and appreciation, and the secrets all of them keep close to their vests until they come out, almost always at the most inappropriate moments. The other members of the team are given somewhat less to do this season, unfortunately, making it a season heavy with the Archer-Lana personal drama as they work their way through parenthood and their rekindled feelings for one another. Along with Christian Slater, guest stars who appear this season include Coby Bell, CCH Pounder and Keith David (in a hilarious episode where Archer meets Lana’s parents), Matthew Rhys, Ron Leibman, Gary Cole, and Michael Gray.

Here are the thirteen episodes contained on two DVDs which make up the season six set:

The episodes are presented in their widescreen television aspect ratio of 1.78:1 and are anamorphically enhanced for widescreen televisions. Sharpness is first-rate throughout with most of the lines in the animation solid and true though with the slimmer, smaller lines, there is occasionally some aliasing to be seen. Color is rich within the delightful artwork. Contrast has been consistently maintained. There is no banding to mar the visual presentation. Each episode has been divided into 4 chapters.

The set is also being released on Blu-ray though only the DVD set was sent for review.

The Dolby Digital 5.1 sound mix doesn’t get the most out of its available channels. Though the spread across the front channels is very impressive (even with some directionalized dialogue on occasion), the rear channels which could house more gunfire from the various shootouts and passing traffic in city scenes and in various chases don’t get used optimally.

Conan and Archer Battle Russian Mobsters (4:34): a fun little short as TV’s Conan O’Brien and Archer fight off a Russian mob in a risky car chase.

Cooking with Milton (3:42): Dr. Krieger and TV’s Michael Gray host an infomercial touting the marvels of Milton, the robot toaster.

A delightful season of Archer contained in this sixth season box collection sets up a potentially new reboot for the series which premieres on FX on Thursday, March 31st.

I am glad to see the Conan and Archer Battle Russian Mobsters short included here as I missed it when it aired originally on Conan.
You must log in or register to reply here. 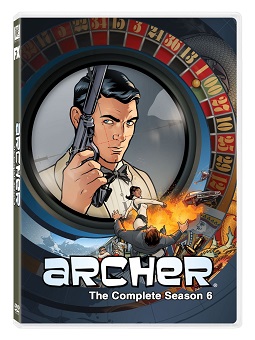