Posted on March 31, 2017 by Matt Hough
A fine, funny season for the wacky animated comedy 4 Stars

An often hilarious if excessively noisy season for the show (more bickering than ever before), Archer had an Emmy-winning seventh season and has been renewed for three more ten-episode seasons.

Reinventing itself for the third time in three years, FX’s Archer had a memorably wacky season for its seventh year on the air, a season which brought it its first Emmy for Best Animated Program and achieved record ratings for the show’s run. The program switches to FXX this coming week and with what appears to be another reboot based on the ending of the seventh season, but that’s mere speculation until we can actually experience it.

Having been spectacularly unsuccessful as a freelance adjunct to the CIA, the former ISIS spy agency headed by Mallory Archer (Jessica Walter) heads west to Los Angeles and opens a private detective firm. The only problem is that no one among the group is a licensed private detective apart from the bookish Cyril Figgis (Chris Parnell), so the firm becomes The Figgis Agency, much to the disgust of the team’s real field agents: Sterling Archer (H. Jon Benjamin), Lana Kane (Aisha Tyler), and Ray Gillette (Adam Reed). They must all accumulate a certain number of work-in-field hours in order to qualify for a license, but naturally they’re going to do as they please with Cyril serving mainly as a figurehead for the company.

The season begins ominously resembling the beginning of Sunset Boulevard with a bleeding body floating in a Beverly Hills swimming pool, a body that appears to be Sterling Archer’s. The stories then jump three months back in time as we see our nitwit private eyes tackle a series of cases, many of which revolve around the enigmatic movie legend Veronica Deane (Mary McDonald-Lewis), her lawyer Alan Shapiro (Patton Oswalt), and her Oscar-winning director/ex-husband Ellis Crane (John O’Hurley). Whether it’s recovering a stolen computer disc with incriminating photos of Ms. Deane, guarding her priceless emerald necklace The Czarina, or playing bodyguard to her on the set of her new movie Deadly Velvet, we can trust the members of The Figgis Agency which certainly includes secretary Cheryl Tunt (Judy Greer), receptionist Pam Poovey (Amber Nash), and scientist Doctor Krieger (Lucky Yates) to make hash of the job and yet still emerge with large fees and their egos firmly intact.

The season also brings back for a single appearance each Archer’s two most prominent nemeses to taunt and torment him, Barry Dillon (Dave Willis), now a complete cyborg and on a quest to find his birth mother, and Christian Slater (playing a fictionalized version of himself still a CIA agent from the previous season) arriving in L.A. with another mission for the gang. But the ten-episode season really does revolve mostly around Veronica Deane and Alan Shapiro, neither of whom ever proves to be completely trustworthy in any of their dealings with the agency but naturally no one suspects them of underhanded dealings since a running gag for much of the season is Sterling’s infatuation with the comely Ms. Deane and Lana’s outraged jealousy over his interest in another woman. The season is kinder to Ray Gillette with him not losing any body parts this year, but it certainly finds Pam and Cheryl dizzier and more outrageously bonkers than ever (though Pam’s inordinate strength saves the day on one or two occasions). There are running gags with two LAPD detectives (played by J.K. Simmons and Keegan-Michael Key) who end up at crime scenes involving our bumbling detectives, and Mallory’s vacant husband Ron (Ron Leibman) also makes a cameo appearance this season though he’s been left back home in New York.

Here are the ten episodes that are contained on two DVD discs in this set:

The episodes are presented in their widescreen television aspect ratio of 1.78:1 and are anamorphically enhanced for widescreen televisions. Sharpness is first-rate throughout with most of the lines in the animation solid and true though one might see a bit of minor contouring in some of the backgrounds. Color is rich within the delightful artwork, and no banding appears to be present. Contrast has been consistently maintained for an excellent picture. Each episode has been divided into 5 chapters.

The Dolby Digital 5.1 sound mix achieves quite a bit on what is probably only a moderate budget. The use of directionalized dialogue is quite impressive throughout the season, and explosions and other atmospheric effects (Archer doing a spectacular fall down a hill early in the season) get a more than decent spread in the fronts and rears as does the music used at certain key moments.

Archer Reviews Bond (5:36): Sterling Archer takes about thirty seconds each to give his opinions on nine of the James Bond films from Dr. No through Spectre. The reviews can be watched separately or in one grouping. The others are Goldfinger, On Her Majesty’s Secret Service, The Man with the Golden Gun, The Spy Who Loved Me, The Living Daylights, For Your Eyes Only, and Tomorrow Never Dies.

Archer Live on Boat (1:14:15): at Comic-Con, the Archer cast (minus Jessica Walter) performs live on an anchored boat in the San Diego harbor one of the scripts from an earlier season with the help of two members from the audience. Plenty of salty humor, ad-libs, and general mayhem ensues.

An often hilarious if excessively noisy season for the show (more bickering than ever before), Archer had an Emmy-winning seventh season and has been renewed for three more ten-episode seasons. That’s very good news for fans of this raucous, salty animated comedy even if Fox no longer issues this quality show on Blu-ray. The DVDs look fine with a good upconverting player. Recommended! 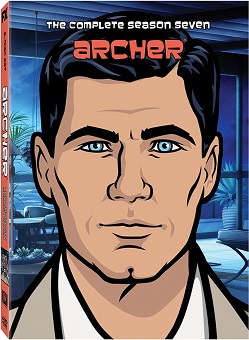