Posted on March 22, 2019 by Todd Erwin
You will believe a man can breathe underwater… 4.5 Stars

Aquaman is a feast for the eyes and ears on Warner’s 4K UHD Blu-ray release.

For most people in my age group, their familiarity with Aquaman was the rather silly Saturday morning (and after-school) cartoon series Aquaman that initially ran on CBS from 1967-1970 and Super Friends on ABC from 1973-1986, and a more modern incarnation (with better animation) Justice League on Cartoon Network from 2001-2004. In more recent years, an attempt was made to create a live-action Aquaman TV series, appearing briefly on the series Smallville in 2005-2006 and even an unsold pilot Aquaman in 2006. Bringing Aquaman to the big screen, though, was always considered a technical challenge, one that fans and even filmmakers pondered after Warner Bros and DC Comics announced that Jason Momoa would appear on movie screens as the comic book hero in Zack Snyder’s Batman v Superman: Dawn of Justice and Justice League, and eventually in his own movie to be directed by James Wan (Saw, The Conjuring).

Aquaman opens with an exciting prologue showing how Arthur Curry/Aquaman’s parents, lighthouse keeper Thomas Curry (Temeura Morrison) and Queen Atlanna (Nicole Kidman), met during a hurricane, Thomas finding Atlanna washed ashore unconscious and injured. They quickly fall in love and have a son together, but her betrothed future husband, King Orvax of Atlantis, has sent a team of commandos to retrieve her. After putting up a fight, she surrenders and offers to return to Atlantis, promising to return at sunrise sometime in the future. This leaves Thomas to raise his son on his own, realizing he has a way of communicating with sea life as he matures. Fast forward several years after the events in Justice League, and Aquaman has taken up the super hero thing by saving the crew of a submarine under attack by a team of high-tech pirates under the command of Jesse Kane (Michael Beach) and his son David (Yahya Abdul-Mateen II). David manages to escape before the submarine explodes, blaming Aquaman for his father’s death. Meanwhile, Aquaman’s half-brother, King Orm (Patrick Wilson), is trying to unite the kingdoms of the sea in order to mount an army to attack the surface, wanting to rule both sea and land, with help from King Nereus (Dolph Lundgren). Nereus’ daughter and Orm’s betrothed, Mera (Amber Heard), with help from vizier Vulko (Willem Dafoe), seeks Arthur/Aquaman’s assistance to stop Orm from his evil plan, telling him that he is the rightful heir to Atlantis and should fight for his right to the throne.

Aquaman is a fun-filled adventure of a reluctant hero finding his true self and eventually accepting his destiny. Jason Momoa is perfectly cast as the title character, full of macho bravado and childish joy, at first shunning his destiny and then relishing it (perhaps his four seasons on Stargate: Atlantis prepared him?). Amber Heard shows some real chemistry with Momoa, never playing the damsel in distress but often playing Aquaman’s equal. If there is a weak link in the casting, it would be Patrick Wilson as Orm, who never quite comes across as menacing or even threatening. Credit has to go to director James Wan for making sense of what could have easily been a laughable soap opera. The visual style is definite eye candy, and the visual effects team pull off the underwater sequences with a level of believability. The audience knows, in the back of their minds, that much of the movie could not have possibly been shot underwater, but it often appears as if they did. This is the best DCEU movie since Wonder Woman.

Aquaman was captured at 3.4k resolution on Arri Alexa Mini and SXT cameras, and completed as a 2K digital intermediate with Dolby Vision high dynamic range for premium theatrical engagements. Warner’s 2160p HEVC-encoded transfer presents the movie in its IMAX form (alternating between 2.39:1 and 1.78:1 aspect ratios), and offering both HDR10 and Dolby Vision high dynamic range. The result is an eye-popping world of dazzling and vibrant colors with rich contrast. Colors, particularly when the image opens up to 1.78:1 (which is for roughly 75-80% of the movie’s running time), literally pop yet never achieve over-saturation that could result in blooming. Black levels are deep and inky, revealing the murkiness of the interiors of a sunken ship with incredible shadow detail. Fine detail gets a minimal uptick thanks to the increased upscaled resolution and higher bit rate. Aquaman  on 4K UHD Blu-ray could very easily be the poster child for what high dynamic range can do.

My assumption that the lack of a redundant 5.1 track and default Atmos track on Fantastic Beasts: The Crimes of Grindelwald was possibly a one-off has been proven with the release of Aquaman. Both the UHD and Blu-ray discs contain a very active and engaging Dolby Atmos mix, but Warner has gone back to including a redundant DTS-HD MA 5.1 default audio track. It has become one of those mysteries along the lines of how many licks it takes to get to the center of a Tootsie Pop. Getting that pet peeve out of the way, like I said, this is a very active and immersive Atmos track (once you select it), with sounds coming at you from nearly every direction, even air bubbles and rushing water above you during the underwater sequences. LFE is also impressive and more dynamic without ever becoming overly aggressive or booming. Dialogue is clear and understandable throughout, well-prioritized and never getting lost in the mix. The redundant DTS-HD MA track is flat by comparison.

All of the Special Features can be found on the included Blu-ray edition, interestingly most are in the 2.39:1 aspect ratio.

Becoming Aquaman (1080p; 13:03): Aquaman himself, Jason Momoa, discusses how he prepared himself for the role and the importance of family and his heritage in his life.

Going Deep into the World of “Aquaman” (1080p; 19:28): At just over 19 minutes, this featurette really doesn’t go into too much depth into the making of the movie, but what is there is interesting.

The Dark Depths of Blank Manta (1080p; 6:39): Yahya Abdul-Mateen II takes on a journey into the character history of Black Manta.

Heroines of Atlantis (1080p; 5:31): A look at the two female leads in the film and the actresses who play them.

Villainous Training (1080p; 6:21): A look at Patrick Wilson’s physical preparations for his role as King Orm.

A Match Made in Atlantis (1080p; 3:12): A look at the on and off screen chemistry between Jason Momoa and Amber Heard.

Atlantis Warfare (1080p; 4:40): A look at the visual and practical effects used to bring the big climactic battle to the screen.

Creating Undersea Creatures (1080p; 7:15): As the title suggests, this featurette takes a look at the many creatures created for the film.

Scene Study Breakdown (1080p; 10:15): A look at three sequences from the film – Submarine Attack, Showdown in Sicily, and The Trench.

Kingdoms of the Seven Seas (1080p; 6:59): Dolph Lundgren takes us on a tour of the various kingdom features in the film.

Aquaman is a fun-filled origin movie that is never as dreary or depressing as some of its DC predecessors. Video and audio are off the charts in this 4K UHD Blu-ray release. 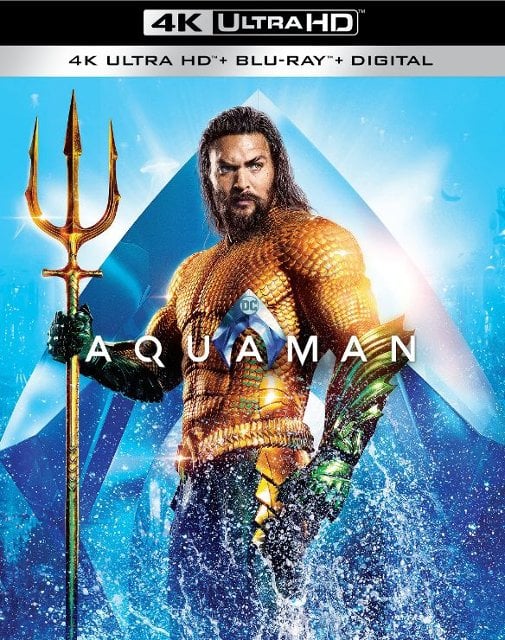