Gian Luigi Calderone’s Appassionata presents at its core a dysfunctional family at its breaking point, and it’s not especially pleasant to watch it splintering.

Gian Luigi Calderone’s Appassionata at its core presents a dysfunctional family at its breaking point, and it’s not especially pleasant to watch it splintering. The actors are first-rate, and while there are some terrific directorial choices that keep one watching despite the unappealing narrative, Appassionata inevitably feels like much ado about nothing.

Middle-aged dentist Dr. Emilio Rutelli (Gabriele Ferzetti) is more than a little surprised when one of his daughter Eugenie’s (Ornella Muti) closest friends Nicola (Eleonora Giorgi) comes on strongly to him during a routine examination and stirs passions within him that had long been dormant. Emilio’s wife Elisa (Valentina Cortese), once a celebrated concert pianist, has been slowly losing her grip on reality and is almost ready for an institution. But Emilio’s renewed passions for the teenaged Nicola are being clouded somewhat by his own daughter’s teasing sexual interest in him. Nicola’s influence on the family as a whole has turned the household topsy-turvy.

Reminiscent of Pasolini’s Teorema (where a handsome male stranger enters a family’s domain and disrupts the equilibrium of every member of it including the servants), the screenplay by director Gian Luigi Calderone, Alessandra Parenzo, and Domenico Rafele hasn’t successfully fleshed out characters’ motivations and trades on tired tropes like mid-life crisis and incestuous relationships for either shock value or titillation (and with all of the bare flesh and the nubile young ladies at the film’s center, the sex scenes are not very sexy but often creepy and repugnant). There’s no question that the two young ladies in the film are gorgeous to behold and would be erotically tempting to many in the audience, but why doesn’t the father exhibit the slightest bit of unease or guilt in his dalliance with an underage girl? (There is one disturbing nightmare sequence where the father’s lust is symbolized by a snarling dog going crazy with excitement over the tempting treasure spread before him; it ends in a murder.) The daughter’s jealousy of her mother (several cruel sequences where the daughter takes demented delight in tormenting her helpless mother) and her come-ons to her father get more pointed as the film runs making for even further squeamishness on the part of the viewer. If director Calderone’s intent was to disrupt the audience and polarize them into either enjoying or condemning what’s before them, then he’s done his job well (though that hardly seems worth the trouble), but this is not a movie that offers a traditional narrative but rather trades on the audience’s pre-established mores to see how such taboo behavior will resonate within them.

The best performance in the film by far is by the wonderful Italian actress Valentina Cortese as the wife whose ability to grasp reality is slowly ebbing away. While her miming at the piano isn’t very convincing, her emoting throughout makes her the most interesting character and the one with whom we most sympathize (she’s trapped in a snake pit without the wherewithal to escape). Gabriele Ferzetti gives a decent performance as the reawakened-to-life dentist though he underplays the role that might have been more involving and empathizing had he put a little more life into it. Both of the young ladies, Ornella Muti as the daughter and Eleonora Giorgi as her disruptive friend, have the physical attributes for their roles. Muti is slightly more successful with her enigmatic flirting than Giorgi, but both women have no problems with the amount of nudity they must display during the film’s presentation. Curiously, the director has not cast any of the girls’ male acquaintances with attractive or appealing young actors (in fact, they’re decidedly homely), but the butcher’s boy who has one important scene with the delusional mother is played by Ninetto Davoli, a young man whom either girl should have found far more appealing than the middle aged, lugubrious Gabriele Ferzetti.

The film’s original theatrical 1.85:1 aspect ratio is faithfully delivered in a 1080p transfer using the AVC codec. The transfer is never sharp, but with a complete absence of age-related artifacts, one must conclude that this is the way the movie was originally filmed. Color is nicely rendered with accurate flesh tones and just a tiny bit of blooming with some of the reds. Black levels are quite good. The English subtitles are in white and are very easy to read. The movie has been divided into 24 chapters.

The disc offers the options of the original Italian soundtrack or an English dub track, each in DTS-HD Master Audio 2.0 mono. For the purposes of the review, I listened completely in the original language. Because the audio track was completely post-synched, there is that dry, somewhat numbing sound of dubbed dialogue tracks, very reminiscent of the era but nonetheless lacking much in the way of highs or lows. Age-related problems with hiss and crackle are not present, but there is a bit of distortion with some of the music late in the movie.

Six-Page Booklet: contains some tinted stills, the original poster art on the back cover, and film historian Julie Kirgo’s enthusiastic appraisal of the movie.

Appassionata may appeal to some viewers far more than to others, and director Gian Luigi Calderone does direct his script with some interesting touches (scenes photographed through stained glass or in mirrors), but its narrative themes inevitably seem detached and unfinished, and you may find as I did that it’s an unsatisfying experience watching it. Still, there are only 3,000 copies of this Blu-ray available. Those interested in purchasing it should go to either www.twilighttimemovies.com or www.screenarchives.com to see if product is still in stock. Information about the movie can also be found via Facebook at www.facebook.com/twilighttimemovies. 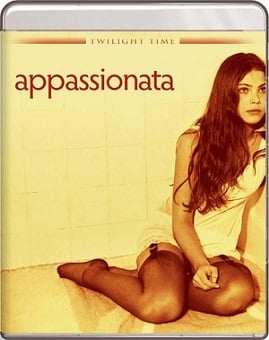