Forum List What's new Dark Style Change width
Log in Register
What's new Search
Menu
Log in
Register
Navigation
Install the app
More options
Dark Style
Close Menu
Posted on May 14, 2019 by Todd Erwin
You are using an out of date browser. It may not display this or other websites correctly.
You should upgrade or use an alternative browser.
Highly Recommended 4.5 Stars

Todd Douglas Miller’s documentary Apollo 11 is a visually stunning look at the United States’ legendary and historic trip to the moon.

Todd Douglas Miller’s documentary Apollo 11 is a visually stunning look at the United States’ legendary and historic trip to the moon. Told through the use of archival footage (in 65mm, 35mm, 16mm, color and black & white video and sill photos) and archival audio from the actual NASA mission recordings and news broadcasts from the likes of Walter Cronkite and others (only Cronkite is credited). And that is part of the beauty and poetry of the film – it is comprised of no newly created footage and no real narrator. The most breathtaking images come early on, utilizing recently discovered 65mm footage (in both 5-perf and experimental 10-perf) that was scanned at 16K before it was edited into the film, documenting the days leading up to and including the launch of the Saturn rockets that propelled Apollo 11 into space. Most have never seen the Apollo 11 mission like this before, and is a must-see for any classroom or anyone interested in space travel or exploration.

As mentioned above, Apollo 11 is comprised of several different formats of video source material, ranging from 10-perf and 5-perf 65mm to 16mm handheld newsreel to black and white 1960s era security video, and pretty much everything in between. Director/Editor Todd Douglas Miller then composited it all into a 2.20:1 aspect ratio, sometimes cropping to full screen, often window boxing or combining multiple images into a split screen. Footage was cleaned up in the best possible quality, and the finished film was completed as a 4K digital intermediate. Universal’s Blu-ray release consists of an excellent 1080p AVC-encoded transfer that replicates the film’s traditional theatrical exhibitions. Colors are bold and vivid, especially in the 65mm footage, but also in the lesser quality 16mm and 1960s color video (hooray for videotape!) without appearing overly smeared. Cropping of this footage was done so with care, and although grain is often very noticeable in much of the 16mm footage, there is still a great deal of detail visible. The only real disappointment is the fact that Universal has not yet released the film on 4K UHD Blu-ray.

Apollo 11 arrives on Blu-ray with one and only one audio option – an earth-shattering DTS-HD Master Audio 5.1 track. The launch of the Saturn rockets will definitely cause your floorboards to rattle thanks to a deep LFE presence, but those floorboards will also rattle a bit as the rockets are moved to the launch pad by the giant crawler-transporter at the start of the film. Dialogue is clear and mostly understandable throughout (there are a few instances where the cleanup of the archival tapes still could not clear up some of the dialogue spoken). Surrounds are used to fill out the listening area with music and atmospheric effects.

Apollo 11: Discovering the 65mm Featurette (1080p; 2:54): This all-too-brief featurette looks at the prototype scanner used to scan the 65mm footage at up to 16K resolution, the pouring through of archival audio recordings, and how much data storage was required once everything was compiled. Although very detailed, I really wish it had been much longer.

Apollo 11 is a documentary that deserves to be experienced in the best way possible, and Universal’s Blu-ray comes very close.

I just received my copy and it is truly astonishing. I double... no triple recommend it.
this film should be the talk of the town, not multi released-edition movies!!!!
buy it, watch it, best film I've ever seen of this event ever.
and crank up than volume for the launch!!!!

I wish this tremendous film was released in 4K. Hopefully soon.

I'm pleased to hear that the Blu-ray includes lossless audio; the original specs released had indicated that it would be lossy Dolby Digitial 5.1 only, so that's a big improvement.

I'm not terribly shocked that a documentary film wasn't initially slated for a 4K UHD physical media release. What does surprise me is that none of the digital storefronts have a 4K version available for streaming.

The film was co-produced by CNN and is slated to air on their network around the time of the actual launch anniversary this summer. CNN doesn't broadcast in 4K, though, so even if the theory was that CNN was holding that back for themselves, it doesn't actually make sense.

I know this may sound silly, but it shows that a G rated movie can still be galvanizing in 2019!

Free Solo was originally available in HD only and then upgraded to 4K so
there is hope.

I picked this up but I really wish it was on 4K because of all the Todd AO footage.

Josh Steinberg said:
I'm pleased to hear that the Blu-ray includes lossless audio; the original specs released had indicated that it would be lossy Dolby Digitial 5.1 only, so that's a big improvement.
Click to expand...

Same here. In fact, the specs on the packaging even list "Dolby Digital 5.1 Surround" audio. I was pleasantly surprised when I popped the disc in that it came up as DTS-HD MA 5.1 instead.

Regarding documentaries released in 4K, even Mill Creek is doing it on 20 yo IMAX material.

I watched this film last night and loved every minute of it.

I also watched his 20 minute film final steps about Apollo 17. I hadn’t seen this mentioned as another of his films!

I’m also hoping to check out Moonwalk One soon. This 1970 documentary used some of the same footage?

Finally is he making any othe Apollo documentaries? Apollo 13 would be a great choice. Also the others that we hear little about. Apollo 12 had a very interesting launch with lightening!

Ross Gowland has read it.

This disc is being released in the UK in NOVEMBER!

'Apollo 11' was a blind buy for me last week. My wife and I watched it on Friday night and we loved it. Fantastic documentary! And the image quality is downright jaw-dropping. In the included bonus feature, it is mentioned that the 65mm and 70mm film from 1969 was scanned at 8K and 16K for use in the documentary. Yet, no 4K release. Dumb!

As much as I want to see this, I'll hold off for now and hope for a 4K release, either on disc or streaming.

dpippel said:
As much as I want to see this, I'll hold off for now and hope for a 4K release, either on disc or streaming.
Click to expand...

So will I. This film was awesome in IMAX.

The film is so good, I won't mind double-dipping if a 4K release comes along.

Hot damn! Just saw the blu-ray and want to echo all the gushing accolades poured onto it - although why not 5/5 for the actual film, Todd? Haven't seen anything equal to this so far this year. The way the film was edited together from hundreds of hours of film footage and tens of thousands of hours of sound footage into such a masterful 93 minutes is staggering. I mean - it's not as though they had a modern story-boarded production! The picture looked really good uprezzed to 4K projection in my eyes. There was quite a lot of grainy 16 mm footage used, so my initial disappointment that this wasn't getting a 4K UHD released is ever-so-slightly mitigated after seeing this (I haven't seen it theatrically). Now I'm going to put on Criterion's For All Mankind to compare and then watch all the bonus features - indeed sorely lacking on this disc!

Tino said:
I wish this tremendous film was released in 4K. Hopefully soon.

Your wish is granted! iTunes just upgraded to 4K

But likely not for those who purchased the Blu-ray and redeemed the MA code...

Todd Erwin said:
But likely not for those who purchased the Blu-ray and redeemed the MA code...
Click to expand...

They will have to do the “gift it to yourself” trick to get it to upgrade. It’s currently only $9.99 right now.
You must log in or register to reply here. 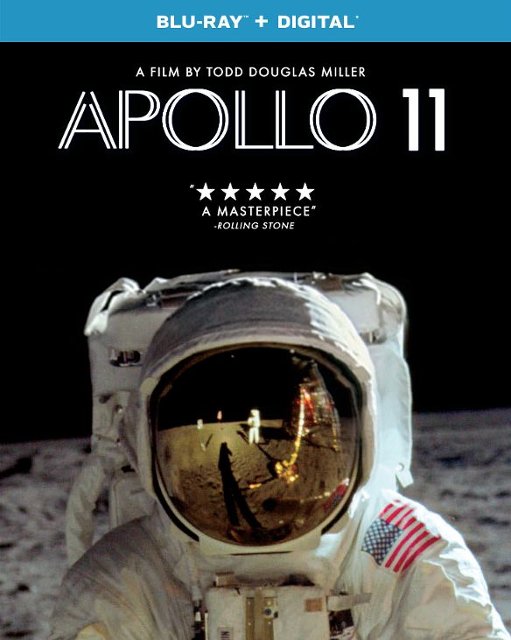