Forum List What's new Dark Style Change width
Log in Register
What's new Search
Menu
Log in
Register
Navigation
Install the app
More options
Dark Style
Close Menu
Posted on August 30, 2019 by Todd Erwin
You are using an out of date browser. It may not display this or other websites correctly.
You should upgrade or use an alternative browser.
Mediocre sequel 3.5 Stars

Richard Dreyfuss and Emillio Estevez are reunited in Another Stakeout, a sequel that now been released twice on Blu-ray, while we are still waiting for the original (and much better) Stakeout to make its Blu-ray debut.

Six years is a long time in Hollywood between a successful movie and its follow-up sequel. Such was the case with Another Stakeout, a sequel that had been promised shortly after the success of 1987’s Stakeout. By the time the sequel landed in theaters, the original had been mostly forgotten and was largely ignored at the box office and by critics.

Of course, you can’t really blame them, as Another Stakeout is basically a watered-down retread of the first film, minus the romance and suspense. Richard Dreyfuss and Emillio Estevez return as Seattle police detectives Chris Lecce and Bill Reimers, respectively. When their stakeout at the opening of the film (which is almost identical to the one in the first film) goes bust, they are assigned to stake out a vacation home (outside of their jurisdiction) where a Federal witness (Cathy Moriarty) who escaped a failed protective custody may be hiding. There’s just one catch – they have to take ADA Gina Garrett (Rosie O’Donnell) with them. Currently living in the vacation home they are watching are Brian and Pam O’Hara (Dennis Farina and Marcia Strassman). Almost immediately, their cover begins to fall apart as Chris, Bill, and Gina desperately try to keep their story and identities straight (Chris and Gina are married, Bill is Chris’ son from a prior marriage). All the while, a hit man (Miguel Ferrer) is closing in on the witness.

Another Stakeout does have a few funny moments, and Dreyfuss and Estevez have great chemistry in their almost constant banter and bickering with each other. O’Donnell is passable as the third wheel who doesn’t quite understand how a stakeout operates and causes further tension between the two detectives. Farina and Strassman are also very good as the couple who know something is not quite right with their new neighbors, but figure it out all wrong. Moriarty and Ferrer are the red-herrings here, with Moriarty getting very little screen time and Ferrer not really all that menacing. John Badham and Jim Kouf, the director and writer of the original Stakeout, return here in the same roles, but the movie just feels tired and watered down, following the “formula” of the first film too closely.

Kino Lorber’s Blu-ray release of Another Stakeout marks the second time the movie has been released on the format; the first being Mill Creek’s release over 8 years ago. To be honest, the differences between the two are very minimal, and I wouldn’t be surprised if the same HD master was used for both releases. Colors are decent but appear a bit subdued at times. Contrast is good, with nice black levels that retain a good deal of shadow detail and whites that don’t appear clipped. Detail is slightly better on this new release from Kino, although that may have more to do with the encode as some of the compression issues on Mill Creek’s release are not present here, although there are a few minor instances of edge enhancement that was probably baked in to the HD master.

One obvious advantage the Kino release has over the previous Mill Creek one is the inclusion of a 5.1 DTS-HD Master Audio track, plus a 2.0 stereo track. That being said, the 5.1 track is not all that remarkable. It does have a slightly more controlled lower end, obviously, and better steering of audio from channel to channel than the 2.0 track. Dialogue is clear and understandable, although it does have a tendency to sound tinny, as if the highs have been enhanced and the lows cut off. As for the 2.0. track, it is definitely mixed at a much louder volume.

The only special features Kino has included are trailers for some other Touchstone and Hollywood Pictures movies that have been licensed to Kino from Disney.

Another Stakeout (480i; 2:09): This looks like the theatrical trailer, but sounds like the home video trailer based on the narrator.

The Gun in Betty Lou’s Handbag (480i; 0:52): This looks and sounds like a home video trailer rather than a theatrical trailer.

Another Stakeout is an okay sequel that pales in comparison to the previous entry, which is still missing on Blu-ray.

I always loved these 2 movies.

The first one was really good & fun. Have it on LaserDisc.
Yup! a laserdisc. You can still get them. E Bay ect.
The second one. So So!
Just my two bits worth.
You must log in or register to reply here. 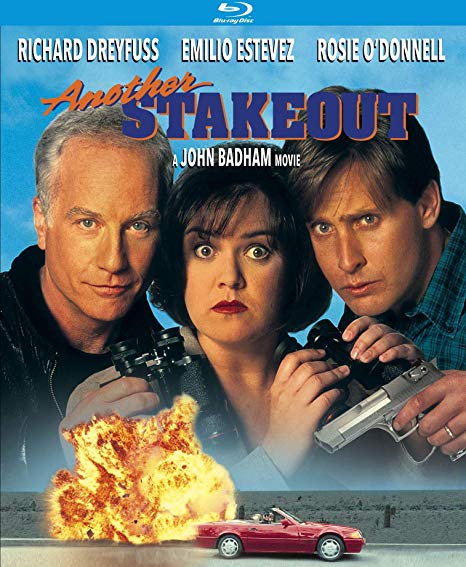