Forum List What's new Dark Style Change width
Log in Register
What's new Search
Menu
Log in
Register
Navigation
Install the app
More options
Dark Style
Close Menu
Posted on August 17, 2016 by Todd Erwin
You are using an out of date browser. It may not display this or other websites correctly.
You should upgrade or use an alternative browser.
Better than expected 4 Stars

Adapting video games to the big screen has not had a stellar track record, and Angry Birds just may be the first mobile game to be adapted to the big screen. The result is a much better film than expected, but parents may find some of the rude humor unsuitable for smaller children.

When Red (Jason Sudeikis) is late delivering a birthday cake to a hatchling’s party, the father’s taunts cause Red to act out in a fit of anger, and as punishment is sentenced to a series of anger management classes taught by Matilda (Maya Rudolph). At the class, Red meets Chuck (Josh Gad) a fast-talking, fast-moving yellow bundle of energy, Bomb (Danny McBride), a large, round blackbird ho has issues controlling his explosive (quite literally) outbursts, and Terence (Sean Penn), a red giant of a bird of few words. Red, Chuck, and Bomb are outcasts on Bird Island, and naturally bond as a team. When a boat of pigs arrive on the island, led by Leonard (Bill Hader), and crash into Red’s house, Red has a gut feeling that there’s something “not kosher” about the pigs. In search of wisdom, Red, Chuck, and Bomb go on a journey to find Mighty Eagle (Peter Dinklage), a mythical authority figure, who in fact is a drunken jerk who initially doesn’t care about the birds on the island. As it turns out, the pigs are up to something, a plan to steal all of the eggs for a giant feast back on Pig Island. This makes the birds angry, turning to Red who leads them on an all-out attack on Pig Island.

I have to admit I went into The Angry Birds Movie with very low expectations, even though I’m a casual fan of the game franchise. The games really don’t have much of a story or plot, other than the pigs have stolen eggs and the birds have to attack them using slingshots to defeat them, so stretching that premise out to 90 minutes seemed a bit thin. What the filmmakers have done is created an origin story of sorts, introducing us to the five primary bird characters from the game before they were really allowed to be angry (or given a reason to be). It is that story arc, and the theme of overcoming individual anger issues for many of our main characters, are what make the film work. The animation by Sony Imageworks is of high caliber, about what one would expect from DreamWorks, Blue Sky, or Illumination. The animation is bright, colorful, and highly detailed, and moves quite fluidly. The voice acting is also very good; Jason Sudeikis and Danny McBride deliver some good lines that may or may not have been improvised, Josh Gad brings a Daffy Duck quality to Chuck (but without the speech impediment), Maya Rudolph portrays Matilda with a Zen quality that you know is just a facade, and Peter Dinklage almost steals the show as the full of himself and dim-witted Mighty Eagle. That all being said, parents should be cautioned about some of the rude bathroom humor in the film that they *may* find unsuitable for children.

The Angry Birds Movie is packaged in a way many would like to see the studios follow, by including the film in 4K UHD, 3D Blu-ray, and 2D Blu-ray, each on its own disc. The 4K UHD version is, perhaps, the best way to view, as it benefits the most from the increased resolution and color gamut. Detail is amazing, down to each individual strand of hair in each bird’s feathers, textures in their beaks as well as in the walls of King Leonard’s castle, and even in the shadows. Speaking of shadows, contrast is excellent with no crushing of blacks or blooming of whites. Colors are plentiful and vibrant, never appearing over saturated. There are also no banding or compression issues whatsoever.

The 3D Blu-ray is also a treat, although it does appear a tad softer due to the lower resolution of 1080p (did I really just say that?). This is a fun 3D experience, with added depth (particularly during the opening prologue as Red runs through the jungle and the climax as birds fling themselves via slingshot into Pig City) and some occasional pop out (there is a great moment with a cuckoo clock during the prologue, and beaks appear to extend out beyond the screen in extreme closeups throughout the film).

Sony has graced the UHD version with a Dolby Atmos soundtrack with a Dolby TrueHD 7.1 core. When played back in 5.1 with ProLogic IIz enabled, this is a slightly more immersive mix than the DTS-HD MA 7.1 track found on the Blu-ray (2D and 3D) versions (the film was released theatrically in 7.1). Both mixes are fairly active, with the mix of rock and pop songs, as well as the instrumental score and discrete effects, spread across all channels. The track really kicks into gear after the pigs arrive, adding to the mayhem they are creating on-screen, culminating in the epic battle at the end of the film. Heights are implored mostly during overhead flybys, and are likely more effective for those with Atmos. Dialogue is always clear and understandable, never getting lost in the mix.

Symphony Mode: Nothing more than an isolated music track, available only on the UHD and 2D Blu-ray versions.

Angry Birds Action! How to Sync (1080p; 1:08): An advertisement for the latest Angry Birds game, and how to play it and obtain power ups while watching the movie. Available on all three discs.

The remaining special features are only available on the included 2D Blu-ray disc.

Dance Along Birds and Pigs (1080p; 3:35): An actress dressed as a cowgirl with a pig snout dances along with sequences from the film.

Creating the Real World of Angry Birds (1080p; 8:29): Jason Sudeikis and Josh Gad narrate a behind the scenes look at the making of the film.

Making Music with Composer Hector Pereira (1080p; 10:31): The composer discusses his approach to several of the music themes used in the movie.

The Angry Birds Movie is a much better movie than it deserves to be, and is one of the best UHD combo packs available so far by including the 3D version of the film. Hopefully, Sony will follow suit with its upcoming Ghostbusters UHD release.

I do like that the package includes 4K, 3D, and 2D for a decent price. I wish others would do it. While I have not seen the film, I doubt I would like it enough to justify a purchase.
You must log in or register to reply here. 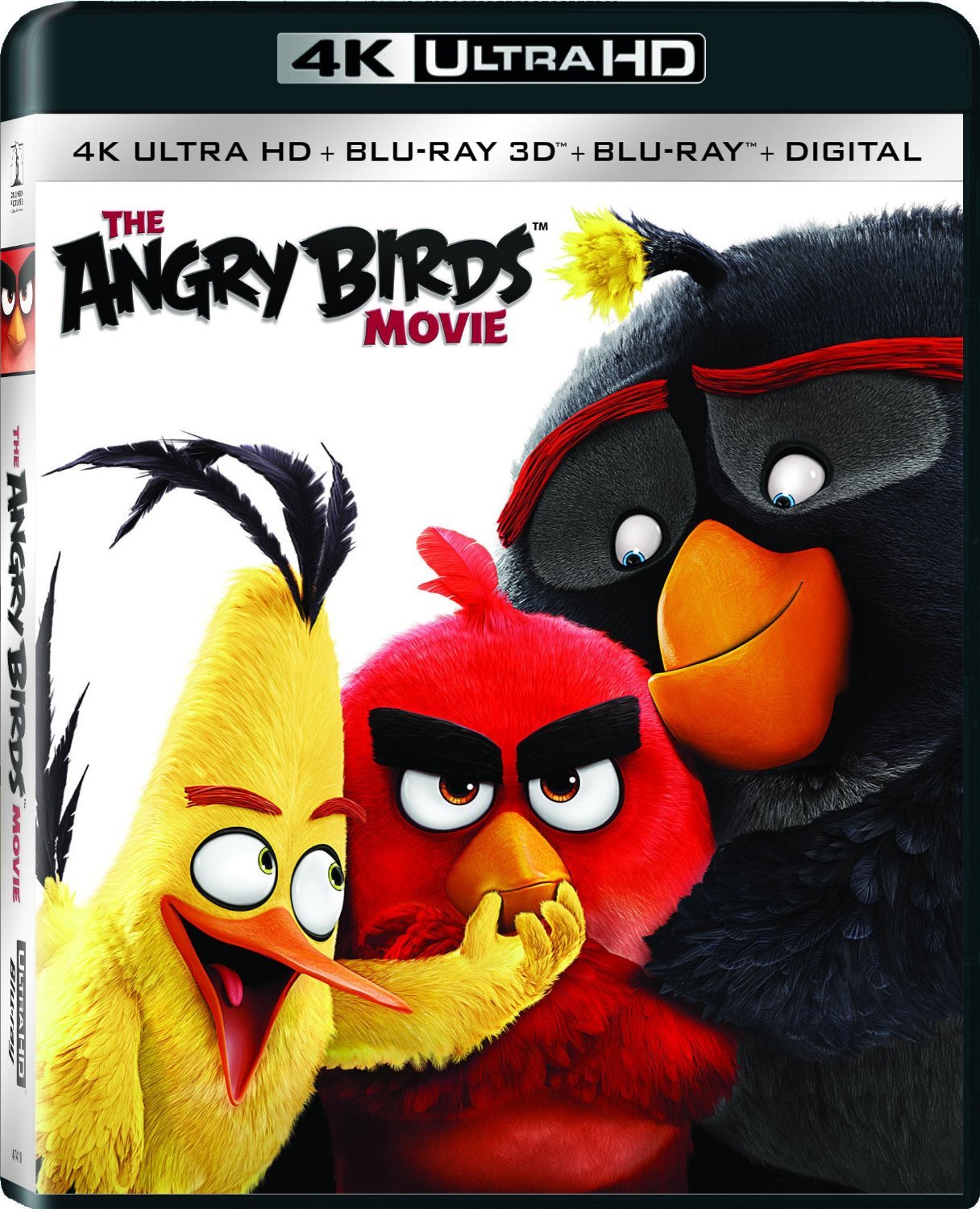