Though The Andy Griffith Show Christmas Special was broadcast in high definition which is naturally missing on this standard definition DVD, the quality of the comedy is what’s foremost of importance, and this disc serves as a fine memento for those who want to relive this first-time offering of colorized episodes from the show’s first two seasons.

With so many of its classic sitcoms filmed in black and white during the first two decades of television broadcasting, CBS is faced with a real dilemma: how to milk the last dime of value for contemporary audiences out of its vault of classics, and the answer has been colorization. Half a dozen or so episodes of I Love Lucy have undergone the colorized treatment, and last year The Andy Griffith Show premiered two of its classic episodes (coming from its first five years on the air) in color for the first time bundled together as a holiday special. The Andy Griffith Show Christmas Special, along with its I Love Lucy counterpart, both earned good ratings for these experiments meaning that we’ve likely not seen the last of them.

If CBS had to pair two memorable episodes of Andy Griffith’s wonderful original series together, they couldn’t have chosen more wisely than with two of its most fondly remembered episodes: its own “Christmas Story” from its first year on the air and “The Pickle Story” from season two. Both combine hilarity with genuine warmth and kindness, hallmarks of the series, and both show the ensemble cast performing their by now familiar roles with great ease and professionalism with carefully selected guest stars brought in to complete the program. In “Christmas Story,” Mayberry’s wealthy business owner and town miser Ben Weaver (Will Wright) insists Andy arrest moonshiner Sam Muggins (Sam Edwards) whose clandestine operation is costing his own store money. Despite it being the day before Christmas, Weaver insists the sheriff do his duty. Reluctantly abiding by the law, Andy arrests Sam and then goes out of his way to step around the law so Sam’s family can enjoy Christmas Eve while Weaver stews in the juices of his own petard realizing that all his money isn’t a warm substitute for friends and family. Elinor Donahue was a regular on the show during the first season as Andy’s girl friend, and she and Andy engage in a lovely duet of “Away in a Manger” to set the right tone for the episode in the holiday season.

“The Pickle Story,” one of the top fan favorites for more than fifty years, is pure comedy gold as Aunt Bee (Frances Bavier), who manages to formulate the worst “kerosene cucumbers” in town each year for the county fair, decides to enter the contest again after Andy and deputy Barney (Don Knotts) switch her inedible concoctions with store-bought pickles so their digestive tracts might be spared from further abuse. Afraid that their ruse might rob eleven-time blue ribbon winner Clara Johnson (Hope Summers) of the prize unfairly, the boys must eat eight jars of pickles before the fair comes to town. The story moves fast and builds in comic momentum from scene to scene with Frances Bavier appealing as Aunt Bee and Don Knotts being a particular standout (likely helping him win his second of five Emmys for this role during the run of the series) and guest star Hope Summers as a recurring Mayberry resident pulling on the heartstrings as she reminisces about how much the contest means to her and how much her late husband had always loved her pickles.

Colorization has come a long way from the crude early attempts that Ted Turner foisted on the public with half-colored dud versions of classics like 42nd Street, It’s a Wonderful Life, and Miracle on 34th Street. Here the colorizers have gone to the trouble of coloring eyes and tongues and hair (though that is the one place where it seems some shortcuts were taken particularly with Andy) and used the same colors in the courthouse and Andy’s home that the later color versions of the show revealed to the audience. For the younger generation, many of whom can’t stand black and white films and television shows, it’s a decent attempt to introduce them to the classic comedies of their fathers and grandfathers. And, of course, the black and white versions remain for purists. The disc offers both episodes of the original shows in black and white and colorized.

The program’s original 1.33:1 aspect ratio is replicated here, and the show’s grain structure coming from film is also retained without digital manipulation. Color might veer a bit toward orangey brown in terms of flesh tones, but greens and reds come across nicely. There’s a bit of flicker here and there, and oddly a speckle or two of dirt in “The Pickle Story.” (Purists will also note that tiny cuts have been made in the content to make the pair of shows fit a one hour time slot.)

The disc offers a Dolby Digital 2.0 soundtrack, decoded by Dolby Prologic into the center channel. The mono mix offers era-appropriate blends of dialogue, music, and sound effects without any problems with age-related hiss or crackle on the soundtrack.

The disc offers the original 45:07 broadcast of the special with the two episodes paired together and commercial inserts (without the commercials) along with the two individual episodes in both black and white and color.

Though The Andy Griffith Show Christmas Special was broadcast in high definition which is naturally missing on this standard definition DVD, the quality of the comedy is what’s foremost of importance, and this disc serves as a fine memento for those who want to relive this first-time offering of colorized episodes from the show’s first two seasons. Recommended! 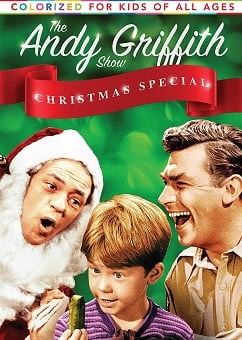