Posted on April 2, 2016 by Matt Hough
Hollywood classic at its classiest 4.5 Stars

A grand amalgamation of historical fiction and romantic fantasy, Anatole Litvak’s Anastasia features striking performances and a first-rate production of a novel idea based loosely on a real-life claimant to the Romanov dynasty.

A grand amalgamation of historical fiction and romantic fantasy, Anatole Litvak’s Anastasia features striking performances and a first-rate production of a novel idea based loosely on a real-life claimant to the Romanov dynasty. The movie works its magic so evocatively that by the end it doesn’t really matter the truth or falseness of the story; we’ve come to care so much about the movie’s principal figures that we can bask in the glow of those satisfying emotions even if they were brought about artificially.

Russian exile General Sergei Pavlovich Bounine (Yul Brynner) is earning a decent living as the proprietor of an artists’ café in Paris in 1928, but he longs for great wealth, and he hits on the idea of finding a stranger to pass herself off as the lost Princess Anastasia, the possible last surviving member of the ruling Romanovs in power at the time of the Russian Revolution and executed summarily to end their dynasty. A destitute, suicidal woman Anna Koreff (Ingrid Bergman) is thought to have some passing resemblance to the last pictures of the Princess Anastasia, and Bounine begins grooming her in order to pass her off as the Princess with a waiting fortune in the Bank of England of £10 million. But to claim the money, she must convince a long litany of surviving palace servants, the Princess’ intended fiancé Prince Paul von Haraldberg (Ivan Desny), and finally the Dowager Empress Maria Feodorovna (Helen Hayes) now living in Copenhagen. Anna is willing enough to try it, but oddly as time passes during her lessons, she begins to display knowledge of the royal court and family and mannerisms of the Princess known to a very few people and for which she has no explanation. The evidence seems to point to her actually being the long lost princess.

Adapted from a French play by Marcelle Maurette and translated for American audiences by Guy Bolton, screenwriter Arthur Laurents has fleshed out the stage version with many new characters and additional scenes that show the claimant’s enigmatic knowledge of mannerisms and court personages making for a much more involving story with a real mystery at its core: is this woman really Anastasia, and if she isn’t, where did she come by all of her insider information? The movie may provide no clear cut answers (history and forensic science finally solved the matter once and for all), but the answers to those questions don’t matter when the story is so compelling and it’s being acted by masters and directed by one of the more under-heralded directors in Hollywood, Anatole Litvak. Litvak isn’t afraid of dialogue-heavy scenes because he shoots them interestingly and makes the most of the widescreen frame to capture the gorgeous production design by Andrei Andrejew and Bill Andrews in which London soundstage sets genuinely persuade us that we’re in grand halls, hotel suites, cafes, concert halls, and vast ballrooms. The intense drama with all of the grilling examinations that Anna endures to convince others of her identity is milked to the fullest, and you’ll look long and hard to find a more compelling and emotionally powerful scene than the fateful meeting between the Dowager and a woman who might be her granddaughter. He also provides smooth segues between scenes handled most stylishly late in the film when an argument between Bounine and Anna switches to the evening’s formal presentation through a simple, slight camera pan across a staircase.

The film had the great good fortune to bring Ingrid Bergman back to American films after a seven-year exile when she was condemned and basically blacklisted for leaving her family and falling in love and marrying Italian director Roberto Rossellini. She certainly earned the Oscar she won for her performance (also the New York Film Critics and Golden Globe Best Actress awards) of alternating fire and futility, fierceness and frailty, and genuine earnestness as Anna Koreff. 1956 was a triumphant year for Yul Brynner appearing in three of the year’s biggest hits: The Ten Commandments, The King and I, and Anastasia. He may have won his Oscar for The King and I, but he’s every bit as impressive as the dynamic manager of the enterprise who gets more emotionally involved in his ruse than he could ever have expected. The script even finds a couple of occasions for him to take out his balalaika and sing some songs while accompanying himself. Helen Hayes never did screen acting any more formidable and impressive than she does here giving great nobility and pitiable loneliness to the character of the Dowager Empress. Akim Tamiroff as Boris Chernov offers able, amusing assistance to Brynner’s puppet master while the always delightful and impressive Martita Hunt puts on a great show as the fluttery lady-in-waiting Baroness Elena von Livenbaum. Felix Aylmer, Ivan Desny, and Natalie Schafer all do well with their relatively minor supporting roles.

The transfer is presented at its Cinemascope 2.35:1 theatrical aspect ratio and is offered in 1080p resolution using the AVC codec. There is great improvement in the color dynamics on this high definition master from the previously released DVD with skin tones much more richly rendered and overall color stronger and more resilient. Sharpness is very good, too, black levels are certainly decent, and there are no age-related problems with dust and scratches to report. If the image is a shade darker than one expects robbing the picture of some vibrancy, that’s the only weakness to nitpick. The movie has been divided into 24 chapters.

The disc offers two lossless encodes from which to choose: DTS-HD Master Audio 5.1 and 2.0 stereo sound mixes. While the 5.1 doesn’t do great things with the rear channels apart from Alfred Newman’s stunning background music, one can sense directionalized speech throughout, and atmospheric effects are used sparingly and well. Dialogue sounds very good in both mixes, and either one should please fans of the film. No evidence of age-related hiss or crackle remains.

Audio Commentaries: two entertaining commentaries offer a wealth of information and impressions on the film and its personnel. In the first, ported over from Fox’s DVD release of the movie, film historian Sylvia Stoddard offers historical background on the film and real life while music expert Jon Burlingame discusses Alfred Newman’s wonderful score. Screenwriter Arthur Laurents’ comments are edited into the mix along with actor James MacArthur commenting on his mother Helen Hayes’ work in this film and her long career in show business. In the second commentary, film historians Julie Kirgo and David Del Valle have an entertaining back-and-forth about the actors, the film, and the real life story of Anna Anderson.

Fox Newsreels (7:18, SD): four vintage newsreel excerpts shown in montage cover the film’s premiere, awards won by it and other Fox films and personnel in 1956, and the fall of the Romanovs.

Song Demo (2:47): an audio track which puts words to Newman’s gorgeous main theme, sung in this demo by Ken Darby.

Six-Page Booklet: contains some color stills, original poster art on the back cover, and film historian Julie Kirgo’s forceful analysis of the movie.

Hollywood classics don’t get much classier than Anatole Litvak’s Anastasia with Oscar-winning work by Ingrid Bergman and a score of actors and studio technicians that make this a polished and prized gem of the studio era. There are only 3,000 copies of this Blu-ray available. Those interested in purchasing it should go to either www.twilighttimemovies.com or www.screenarchives.com to see if product is still in stock. Information about the movie can also be found via Facebook at www.facebook.com/twilighttimemovies. 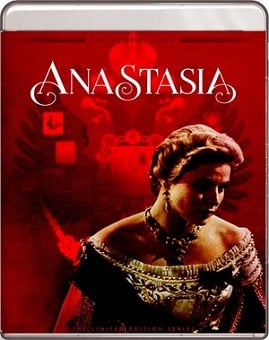