Forum List What's new Dark Style Change width
Log in Register
What's new Search
Menu
Log in
Register
Navigation
Install the app
More options
Dark Style
Close Menu
Posted on June 9, 2020 by Matt Hough
You are using an out of date browser. It may not display this or other websites correctly.
You should upgrade or use an alternative browser.
Still perceptive look at an independent woman adrift in a changing world 4.5 Stars

Nominated for the Best Picture Oscar in 1978, Paul Mazursky’s An Unmarried Woman offers an eagle-eyed view of womanhood during a tumultuously changing canvas of expectations and possibilities in the 20th century’s last quarter.

An Unmarried Woman, Paul Mazursky’s insightful, engaging look at the aftermath of a divorce, seems just as spot-on now in the 21st century as it did forty-two years ago when the movie was first released. Wonderfully engrossing performances and fresh, nuanced direction give An Unmarried Woman its own unique appeal quite different from the agonizing, vitriolic treatment of divorce found in other movies of its own era or later ones.

Upper middle class Erica (Jill Clayburgh) is shocked to learn from her stock broker husband Martin (Michael Murphy) of almost two decades that he’s leaving her for a younger woman with whom he’s been having an affair for over a year. Erica’s comfortable, predictable life is thrown upside down as she begins to wonder what her place in the world is now that her primary position as wife has suddenly been exterminated. Working with a therapist (Penelope Russianoff) aids her somewhat, but it takes time for Erica to readjust to the world of men who now seem more predatory, petty, and entitled than she had ever thought about or noticed before.

Writer-director Paul Mazursky offers another slice-of-life look at someone struggling to cope with a new existence after having had a comfortable old life yanked forcefully away, something we had already seen in such previous works of his like Bob & Carol & Ted & Alice, Harry and Tonto, and Next Stop, Greenwich Village (and what we’d see in such future hits as Moscow on the Hudson and Down and Out in Beverly Hills). The story divides itself neatly into three acts: Erica’s comfortable urban life with her husband and fifteen-year old daughter Patti (Lisa Lucas) which consumes about a half hour of the film, the devastating news that her marriage is coming to an end through no fault of her own and her attempting to maneuver through her feelings of anger, abandonment, loneliness, and disgust, and then finally her pursuit of a new, more independent life where a serious affair with a talented artist (Alan Bates) allows her to live life on her own terms and not ones dictated by a male partner. It was a rather bold statement in its day despite the women’s movement being in full flower during the era: women were still expected to kowtow to the needs of their men when there were conflicts of interest in terms of professional or personal choices. Mazursky directs in a fairly straightforward manner with only an occasional flourish of self-conscious camera movement (an artsy ice skating sequence, some painterly indulgences), and while his script is mostly solid, the introduction of Alan Bates’ Saul Kaplan seems a bit abrupt especially when compared to many superb sequences of domestic conversations, awkward blind dates, and cocktail party skirmishes where the male ego is shown at its raging worst.

Jill Clayburgh won Best Actress at Cannes (and earned Golden Globe and Oscar nominations) as the title character, a woman thrust back into a world of independent living ill-prepared for what she was to find there. Michael Murphy’s excellent performance in the difficult role of an unfaithful husband who comes to realize what he’s carelessly thrown away marks a career high point for him. Alan Bates couldn’t be more appealing as the open-minded artist craving a woman who’s an equal partner in a relationship (though his male chauvinist expectations can’t help but be revealed near film’s end). Lisa Lucas has many real and forceful moments as Erica and Martin’s precocious teenaged daughter while Pat Quinn, Linda Miller, and especially Kelly Bishop excel as Erica’s best friends struggling themselves near middle age with the changing world. Cliff Gorman has a trio of neatly effective scenes as playboy Charlie whose fragile ego is revealed at Erica’s curt dismissal of his sexual prowess.

The film’s original theatrical aspect ratio of 1.85:1 is faithfully reproduced in this 1080p transfer using the AVC codec. Pristine in appearance and with excellent Movielab color, the transfer’s sharpness varies a bit (unquestionably part of the original photography which is occasionally soft or milky for no good reason), but it certainly seems faithful to one’s memories of the movie’s appearance in theaters. The movie has been divided into 9 chapters.

The PCM 2.0 mono soundtrack is very reminiscent of its era. Dialogue has been excellently recorded and has been mixed with Bill Conti’s sometimes effusive background score and the sound effects with apt professionalism. There are no problems with age-related anomalies like hiss, pops, crackle, or flutter.

Audio Commentary: Recorded separately in 2005 for the DVD release and combined into a single track, writer-director Paul Mazursky and star Jill Clayburgh share thoughtful and perceptive memories of the making of the film.

Michael Murphy Interview (8:51, HD): the actor in 2020 recalls making the film, offers details about the character he played, and shares his admiration for Jill Clayburgh and Alan Bates.

Lisa Lucas Interview (11:06, HD): the actress recalls her audition for the role (against Jodie Foster who had beaten her out for Taxi Driver) and shares great praise for writer-director Paul Mazursky.

AFI Q&A (1:44:55): an audio recording of a question-and-answer session held at the American Film Institute in 1980 as writer-director Paul Mazursky answers queries from the audience using his films to that point as examples.

Enclosed Pamphlet: contains some stills from the film, cast and crew credits, information on the video and audio transfer, and a perceptive essay on the movie by writer Angelica Jade Bastién.

Nominated for the Best Picture Oscar in 1978 (won by The Deer Hunter), Paul Mazursky’s An Unmarried Woman offers an eagle-eyed view of womanhood during a tumultuously changing canvas of expectations and possibilities in the 20th century’s last quarter. With an impeccable video and audio transfer, An Unmarried Woman comes with a strong recommendation.

This is one hell of a good movie and Jill Clayburgh gives a terrific performance . Actresses new to the profession should watch this film and would learn acting skills they probably they never had.
Last edited: Jun 10, 2020

commander richardson said:
Actresses new to the profession should watch this film and would learn acting skills they probably knew they never had.
Click to expand...

Probably knew they never had?
C

Great to see “An Unmarried Woman” has finally arrived on BD, and even greater news for those of us who had benefitted from the 3 prior Mazursky titles that were released by Twilight Time.

Hopefully, this will be indication of our seeing both “Harry and Tonto” & “Down and Out in Beverly Hills” on Blu in the near future.

Mr. Hough, your insightful reviews throughout the years have remained a continued pleasure and guide.

Yet another terrific review, Matt! I will be purchasing this at the next 50% off Criterion B&N sale or Criterion Flash Sale.

My favorite film and female performance of that year. Bates wasn't bad either...

Thank you, Philip and Sean. I really appreciate your kind words.
T

I received my copy and I am waiting to watch it on a double-bill with Marriage Story which Criterion is releasing next month. (I've never seen either.)
T

This was a birthday treat to and for myself this past weekend. I truly enjoyed this film and reveled over the performances—particularly that of Ms. Clayburgh, who left us all way too soon!!!!! Glad I have this one in my library!!!!!
T

This was a birthday treat to and for myself this past weekend. I truly enjoyed this film and reveled over the performances—particularly that of Ms. Clayburgh, who left us all quite too soon!!!!! Glad I have this one in my library!!!!!
B

I was gonna assume a technical glitch - but the posts aren't identical!

"way too soon" vs. "quite too soon" -- big difference.
You must log in or register to reply here. 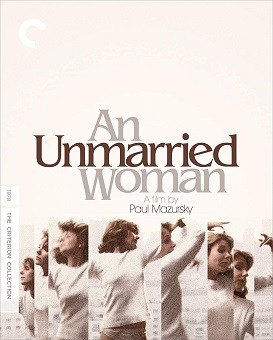