Forum List What's new Dark Style Change width
Log in Register
What's new Search
Menu
Log in
Register
Navigation
Install the app
More options
Dark Style
Close Menu
Posted on December 22, 2019 by t1g3r5fan
You are using an out of date browser. It may not display this or other websites correctly.
You should upgrade or use an alternative browser.
Modern horror classic gets the limited edition treatment 5 Stars

By the 1980’s, werewolf movies were very uncommon in the horror genre, let alone in Hollywood; the last one by a major studio was the B-feature The Boy Who Cried Werewolf (1973). However, the arrival of An American Werewolf in London signaled a major change in the genre, as it combined groundbreaking special effects with an addition of comedic elements. Released several times on home video by Universal, Arrow Video has licensed the film for a limited edition release.

While on a backpacking vacation through Europe, David Kessler (David Naughton) and Jack Goodman (Griffin Dunne) ignore the warnings of locals in Northern England – “Beware the Moon.” – and are attacked by a vicious wolf on the Yorkshire Moors. The attack leaves Jack dead and David critically wounded but alive; when he’s transferred to London for medical help, he falls in love with nurse Alex Price (Jenny Agutter), but also has seemingly vivid hallucinations about what has happened to him. It turns out that he’s been attacked by a werewolf and is due to become one himself during the next full moon…

Upon its initial release, An American Werewolf in London had elicited some confusion as to whether the movie was a horror movie or a comedy – the confusion likely due to the presence of National Lampoon’s Animal House & The Blues Brothers director John Landis at the helm of this one. To put it simply, this movie is a full blooded horror movie with a sharp sense of humor about itself without being too mocking of the many werewolf movies that came before it. However, what really sets this movie apart is the stunning and vivid special effects by makeup maestro Rick Baker; for the first time on screen, we witness the transformation of a man into werewolf without being hidden in the shadows or resorting to trick photography – a decision that netted the film the very first Oscar for Best Makeup. With cutting edge technology and a wicked sense of humor mixed in, An American Werewolf in London gave a classic subgenre of horror a fresh new look and helped to set the standard for all movies dealing with werewolves to follow.

David Naughton has the best role of his career as the doomed David; prior to the movie, he was better known for his appearances in commercials for Dr. Pepper – a gig that ended following this movie. Griffin Dunne is very good in the brief yet crucial role of the ill-fated Jack; the success here parlayed him into a solid career as a character actor with notable parts in Martin Scorsese’s After Hours (1985) and – currently – a recurring role on TV’s This is Us. As David’s budding love interest, Jenny Agutter casts a memorable impression as Alex (she also earned a Saturn Award nomination for Best Actress for this film); John Woodvine is also notable as the doctor who goes from skeptic to believing in the fact that David was indeed attacked by a werewolf. Other familiar faces and notable appearances here include Brian Glover as a superstitious villager reluctant to tell outsiders the truth, David Schofield as a dart player in the Slaughtered Lamb pub (“You…made me miss.”), Lila Kaye as the barmaid in the pub, Frank Oz as an American diplomat who visits David in the hospital (and as Miss Piggy), Sydney Bromley as a hobo attacked by the werewolf, Brenda Cavendish, Michael Carter, and Geoffrey Burridge as victims of a transformed David’s first rampage through London, Linzi Drew as an actress in the film within a film “See You New Wednesday”, stunt man Vic Armstrong as a bus driver, and John Landis himself as a man who gets smashed into a window during the Piccadilly Circus climax.

The movie is presented in its original 1:85:1 aspect ratio in this brand new HD transfer, taken from a recent 4K restoration of the film. Film grain is strong and organic throughout, with fine details both strong and faithfully rendered; the big selling point here is that the color scheme looks very faithful, strong, and not muddied in comparison to previous releases. There’s next to no instances of problems such as dirt, scratches, and tearing present which makes this transfer easily the best the movie has ever looked in home video, surpassing all previous editions in term of quality.

There are two audio tracks on this release: a 1.0 PCM soundtrack (representing the original mono soundtrack) and a 5.1 DTS-HD Master Audio track (carried over from the previous Universal Blu-ray release). Both tracks exhibit strong dialogue and sound effects and the musical soundtrack – featuring a mix of songs (like three different renditions of “Blue Moon”, “Moon Dance”, and “Bad Moon Rising”) and a few cues contributed by Elmer Bernstein – has great strength and ambiance in addition to fidelity. Both tracks have very minimal instances of problems like crackling, hissing, or distortion present, making them likely the best the movie will ever sound on home video; the mono track is this writer’s choice as the best way to watch this movie (especially since its the first time this option has ever been available on home video), but it’s nice to have the 5.1 track as an alternate option, especially to get the most out of your home theater system.

Commentary by Beware the Moon filmmaker Paul Davis – Newly recorded for this release, Davis talks about the movie, its production and its themes not covered in the documentary; a thoroughly insightful track to complement the legacy commentary that accompanies this release.

Mark of the Beast: The Legacy of the Universal Werewolf (1:17:17) – Newly filmed for this release, a look at the evolution of the werewolf movies made at Universal, from Werewolf of London (1935) to An American Werewolf in London. Among those interviewed include directors John Landis, Mick Garris, and Joe Dante, film historians Steve Haberman, C. Courtney Joyner, and Justin Humphreys.

An American Filmmaker in London (11:41) – In this newly filmed interview, director John Landis talks about his time shooting in England as well as some of his views on English cinema, particularly the famed Dead of Night (1945).

I Think He’s a Jew: The Werewolf’s Secret (11:26) – Newly produced for this release, this visual essay by Jon Spira looks at some of the connections the movie made to the Jewish faith as well as some context.

The Werewolf’s Call (11:26) – The director of The Nun – Corin Hardy – and writer Simon Ward talk about their first encounter with this movie in this new featurette.

Wares of the Wolf (7:58) – Newly recorded for this release, special effects artists Dan Martin and Tim Lawes look at some of the costumes and props used in the movie.

Beware the Moon (1:37:39) – Carried over from the most recent home video release, a feature length look at the making of the movie and its subsequent impact on the genre; among those interviewed include director John Landis, producer George Folsey Jr., cinematographer Robert Paynter, makeup artist Rick Baker, cast members David Naughton, Griffin Dunne, Jenny Agutter, and John Woodvine, just to name a few.

An Interview with John Landis (18:19) – This archival interview with the director has him sharing his memories and inspirations for making the movie.

Rick Baker on An American Werewolf in London (11:13) – Taken from the 2001 Collector’s Edition DVD release of the movie, the makeup artist talks about his work on this movie.

I Walked with a Werewolf (7:30) – Taken from the 2009 Universal DVD and Blu-ray release, Rick Baker talks about this film and his work on the then upcoming remake of The Wolfman.

Casting of the Hand (10:59) – Vintage behind the scenes footage of Rick Baker creating the special effects for the werewolf transformation sequence, namely the hand and a few masks.

Exclusive to the Limited Edition

Despite some initial confusion, An American Werewolf in London was a success with both critics and audiences and has gone on to become a cult favorite. Arrow has done a tremendous job with this release, offering up an improved transfer that bests all previous home video editions, the original mono soundtrack for the first time on home video, and a bloody good slate of special features both new and legacy. This is now the definitive version of the movie on home video and very highly recommended.

Agreed - one of the best blu-ray releases of 2019.
You must log in or register to reply here. 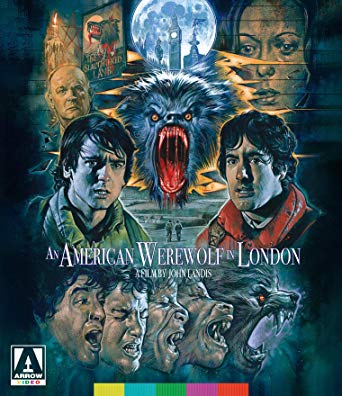