Based on the Pulitzer Prize-winning novel by Philip Roth, American Pastoral marks the directing debut of star Ewan McGregor. The novel was long thought to be unfilmable due to its narrative structure, and despite some fine performances by its leading actors, the movie never really amounts to anything, resulting in a depressing mess of a movie.

At the 45th high school reunion, Nathan Zuckerman (David Straithairn) learns from his long time friend Jerry Levov (Rupert Evans) that Seymour “Swede” Levov (Ewan McGregor) has passed away and his funeral is the next day. Jerry then tells Nathan the story of Seymour’s life after high school, how he married former beauty queen Dawn (Jennifer Connelly) against the wishes of his father, Lou Levov (Peter Riegert), who owns a glove-making factory. Seymour and Dawn have a daughter, Meredith (Dakota Fanning), whom they nickname Merry, who has a stuttering problem that eventually leads her to become a radical and protest the Vietnam War. When the town’s post office and gas station are bombed, killing the owner, Merry becomes the prime suspect and disappears. Hoping to prove her innocence, or at the very least that she was coerced into the act of terror, Seymour becomes obsessed with finding Merry, leading him down some dark pathways while Dawn withdraws and eventually has a mental breakdown. Seymour eventually does find Merry, who is living in squalor trying to hide from society, confessing her crimes to her father and refusing to return home. Seymour continues his visits over the years, from a distance, up until the day of his death.

American Pastoral covers some heavy material taking place during a turbulent time in this nation’s history (the 1960s), mostly race relations and the Vietnam War, but the movie is told more in quick vignettes rather than a fully realized story from beginning to end. Perhaps a more accomplished director could have made sense out of both Philip Roth’s source material and John Romano’s screenplay adaptation, as first-timer Ewan McGregor seems to struggle with how, exactly, to tell this story and keep it interesting without becoming dull or lose the audience due to its often depressing subject matter. McGregor does manage to milk excellent performances from his very talented cast, especially Jennifer Connelly, Dakota Fanning, Uzo Aduba, and it was nice seeing Peter Riegert (Animal House, Local Hero) on screen again. As a film, American Pastoral is often empty, never really coming to terms with itself, and tries for a bittersweet ending that does not pay off.

Shot digitally with the Arri Alexa, American Pastoral arrives on Blu-ray from Lionsgate in a beautiful 1080p transfer, compressed using the AVC codec, that retains the film’s theatrical aspect ratio of 2.40:1. Colors appear natural, with color grading added to enhance the mood of the scenes (blue for the cool mornings, warm browns and yellows for the innocent 1950s, greens for the turbulent 1960s, etc.). While some darker night time and indoor sequences suffer from some minor crushed blacks, contrast on the whole is quite good, providing deep blacks and crisp whites where necessary. Detail is also very good, providing noticeable textures on faces and the leather of the gloves manufactured at the Levov’s plant. This is a very solid Blu-ray.

This is a very dialogue-driven film, so don’t expect a huge amount of surround and LFE activity from the DTS-HD Master Audio 5.1 track. Dialogue is always clear and understandable, directed mostly to the center channel. Surrounds are used subtly but effectively, adding a sense of atmosphere and allowing Alexandre Desplat’s score some room to breathe. LFE is used sparingly, to add some additional low-end to some of the incidental music and emphasis during the post office bombing.

Audio Commentary with Actor/Director Ewan McGregor: McGregor tries to discuss his craft, but often catches himself watching the movie rather than commentating.

“American Pastoral”: Adapting an American Classic (1080p; 28:02): The producers discuss the rather long road taken to get the film made.

Making the American Dream (1080p; 17:38): A more straightforward piece on making the movie.

American Pastoral is a difficult film to get through, despite the fine performances by its cast. The presentation is about what one expects, though, from a recent theatrical release, with very good audio and video. 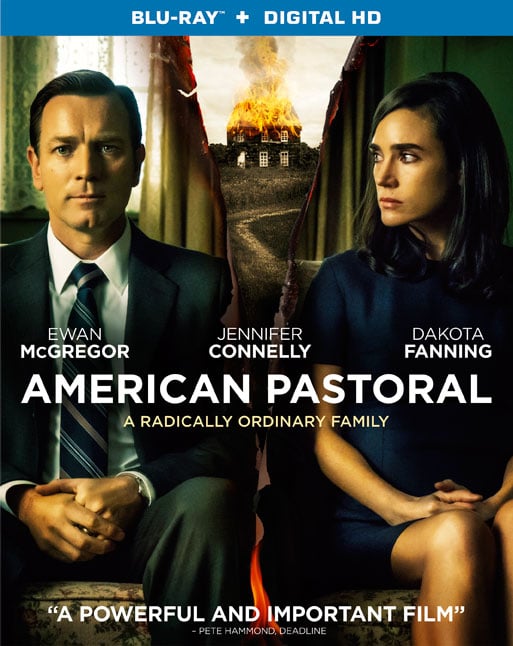