Forum List What's new Dark Style Change width
Log in Register
What's new Search
Menu
Log in
Register
Navigation
Install the app
More options
Dark Style
Close Menu
Posted on December 19, 2017 by Matt Hough
You are using an out of date browser. It may not display this or other websites correctly.
You should upgrade or use an alternative browser.
Giddy romp about a quite serious subject 3.5 Stars

Director Doug Liman and star Tom Cruise reunite for another topsy-turvy action dramedy, American Made, based on the bizarre story of one of the most covert operations in CIA history that eventually came to light.

Director Doug Liman and star Tom Cruise reunite for another topsy-turvy action dramedy, American Made, based on the bizarre story of one of the most covert operations in CIA history that eventually came to light. American Made isn’t as much fun nor as wild a ride as the duo’s previous work together Edge of Tomorrow, and it follows a more certain and predictable path to its conclusion, but there are inarguable highs and very few lows in this fascinating story of a good time Charlie who enjoyed every minute of his time as a gun runner, drug smuggler, money launderer, and all around innocent CIA flunky during the Reagan era.

Barry Seal (Tom Cruise), a disenchanted TWA pilot, is recruited in 1978 by a mysterious low level manager in the CIA code named “Schafer” (Domhnall Gleeson) initially to provide reconnaissance photographs on the expanding Communist threat in Central America, but his daredevil pilot expertise soon places him as a key ingredient in a triangle arrangement with one of the biggest drug and weapons operations in U.S. history running guns and cocaine for the Medellín Cartel and Pablo Escobar (Mauricio Mejía). Seal plays a key role in what would eventually become the Iran-Contra affair while dodging a series of threats by almost every governmental alphabet agency to put him behind bars.

Gary Spinelli spins this eight-year tale of Seal’s derring-do as narrated by Seal on a series of videotapes showing us the man’s full measure of bravado but a decided lack of smarts in other areas of handling this business. While providing us key bits of political history surrounding this major cartel and the hostilities stirred up in Honduras, El Salvador, Colombia, and Nicaragua during the Reagan era, the focus is always on the smiling, often clueless Seal who does as he’s told and reaps many millions of dollars as his reward over the five years or so of his endeavors, so much cash that he runs out of places to store it around his properties. But Spinelli’s script also contains obvious narrative clichés. From the moment that Seal’s idiot, shiftless redneck brother-in-law JB (Caleb Landry Jones) enters the picture, it’s clear Seal’s business dealings will be on a downward trajectory as he struggles to be kind to his kin without revealing more than he has to about his business. Director Doug Liman offers plenty of montages showing us first Seal’s expertise as an aviator (with his first takeoff from a tiny runway in Colombia with fifteen hundred pounds of excess weight a nail-biter that’s beautifully staged and shot) and later his burgeoning lifestyle as the money pours in and his family begins to enjoy the luxuries those kinds of millions of dollars can provide. Famous faces dot the film, from Presidents Carter and Reagan, Vice President Bush, and First Lady Nancy Reagan in news footage to encounters with Manuel Noriega (Alberto Ospino), Oliver North (Robert Farrior) and George W. Bush (Connor Trinneer). A more serious film about the political backstory of this era has been a long time coming even if this one isn’t it and doesn’t pretend to be.

Despite looking nothing like the real Barry Seal who was rather fat and jolly, Tom Cruise makes a mighty effort to find this good ol’ boy character, but his Southern accent comes and goes, and there is too much intelligence behind those eyes to really buy into Cruise as an innocent dupe. Domhnall Gleeson plays his enigmatic CIA low level pencil pusher Monty “Schafer” with just the right amount of sly, smug boldness. Sarah Wright has plenty of moxie as Seal’s wife Lucy while Alejandro Edda and Mauricio Mejía as Jorge Ochoa and Pablo Escobar have just enough of that dangerous élan to join you for drinks and laugh at your jokes before putting a bullet through your head. Caleb Landry Jones is exceptionally good as bad news bear JB, and Jayma Mays is splendid as the fiery state district attorney who moves heaven and earth to bring Seal to justice.

The film’s theatrical aspect ratio of 1.85:1 is faithfully rendered in this 2160p transfer using the HEVC codec. This is not one of those discs that will be used as reference quality material due to the director’s use of milky contrast, teal filters, and a slight softness in the image to suggest an earlier era. Black levels have also been heightened making the use of HDR rather limited for accentuating blacks or bright spots. Colors on occasion can be very big and bold: the greens of the Central American jungles are astonishing to view, and some of the aerial photography is stirring. The movie has been divided into 20 chapters.

The DTS:X sound mix (decoded as DTS-HD Master Audio 7.1 on my equipment) is very active with aerial passovers whizzing across and through the soundstage and weapon fire nicely placed in appropriate front and rear channels. A rich selection of pop music from the late 1970s through the mid-1980s gets the full surround treatment abetted with the background score of Christophe Beck. Dialogue is always understandable and has been placed in the center channel.

There are no bonus features on the UHD disc. All bonus material will be found on the enclosed Blu-ray disc in the package.

Deleted Scenes (9:56, HD): six scenes may be viewed separately or together and with or without director commentary by Doug Liman.

Cruise & Liman: A Conversation (5:25, HD): the movie’s star and director sing each other’s praises and describe their sharing a house in Atlanta which also served as one of the principal sets for the movie.

In the Wings (6:01, HD): director Doug Liman and producer Kim Roth have kind words to say about the three supporting actors in the movie, each of whom also comment on their characters: Domhnall Gleeson, Sarah Wright, and Caleb Landry Jones.

Shooting American Made (4:16, HD): discussing the various locations used in Atlanta and Colombia (which served for all of the Central American countries in the movie) are director Doug Liman, screenwriter Gary Spinelli, producers Brian Grazer, Kim Roth, Tyler Thompson, and actor Tom Cruise.

Flying High (4:50, HD): as a licensed pilot, Tom Cruise discusses all of the flying scenes which he did himself in the movie. He’s praised for his efforts by Director Doug Liman, producer Brian Glazer, and co-star Domhnall Gleeson.

The Real Barry Seal (5:51, HD): Barry Seal’s youngest son Aaron recalls memories shared with his father who died when he was nine.

Blu-ray/Digital Copy: code sheet and disc enclosed in the case.

American Made plays as much for laughs as it does for drama during one of the most notorious political operations in our nation’s history, some of it carried off by one of its most disarming participants, Barry Seal. Fans of the star and director are likely to enjoy its hijinks though others might want to venture a rental first to sample the somewhat predictable wares. 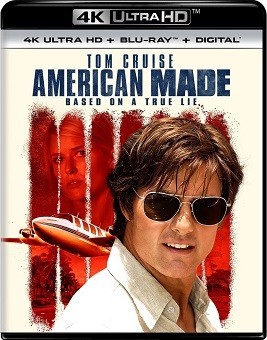