Forum List What's new Dark Style Change width
Log in Register
What's new Search
Menu
Log in
Register
Navigation
Install the app
More options
Dark Style
Close Menu
Posted on December 4, 2020 by Todd Erwin
You are using an out of date browser. It may not display this or other websites correctly.
You should upgrade or use an alternative browser.
Uneven Comedy Anthology 3.5 Stars

The long-forgotten comedy anthology, Amazon Women on the Moon, finally arrives on Blu-ray from Kino Studio Classics (through a licensing deal with Universal).

I’ve said this quite often when reviewing anthologies, and the curse of the concept is that they tend to be uneven (the original Twilight Zone series the rare exception). John Landis’ Amazon Women on the Moon is no exception. Conceived by Landis as a sort of quasi unofficial sequel to his Kentucky Fried Movie from 1977 with writers David Zucker, Jim Abrams and Jerry Zucker, Amazon Women misfires more often than not. After Kentucky Fried Movie, Landis would gain fame after directing Animal House, while the ZAZ team would also score at the box office with Airplane!. The movie would be an attempt to spoof the viewer channel-surfing late at night, taking on movies, TV shows, and commercials.

Production began in 1985, with Landis hiring three additional directors who would take on individual segments – co-producer Robert K. Weiss (his only other directing credits are music videos for “Weird Al” Yankovic), Carl Gottlieb (Caveman plus several various TV episodes), long-time friend Joe Dante (Gremlins), and actor-turned-director Peter Horton (Thirtysomething, New Amsterdam). As Joe Dante explains in the excellent documentary included on this disc, by the time he became involved in the project, most of the “good” material had been taken by Weiss (Amazon Women on the Moon) and Gottlieb (Son of the Invisible Man). Dante basically got the scraps, yet scores big on those leftovers with Bullshit or Not (a takeoff on Ripley’s Believe It or Not with a very funny Henry Silva as host), Hairlooming (Joe Pantoliano in a Hair Club for Men spoof), Roast Your Loved One (a memorial service where stand-up comedians including Steve Allen, Rip Taylor, Slappy White Charlie Callas and Henny Youngman roast the recently deceased husband (Archie Hahn) of Dante regular Belinda Balaski that also includes Robert Picardo as the funeral director), and the film’s finale Reckless Youth, a spoof of “cautionary tales” movies like Reefer Madness featuring Carrie Fisher and Paul Bartel. Horton was hired as a director as a concession to get Michelle Pfieffer for Landis’ Hospital segment (Pfieffer and Horton were married at the time), who directed only two segments, one of which only made the theatrical cut (Two ID’s with Steve Guttenberg and Roseanna Arquette). Landis’ segments ranged from the very funny (and not at all PC by today’s standards ) Blacks Without Soul and Don ‘No Soul’ Simmons featuring a hilarious (and then unknown) David Alan Grier to the slapstick but not too funny Mondo Condo that starts the film (featuring Arsenio Hall) to the almost painful Hospital with Michelle Pfeiffer and Peter Horton as new parents and Griffin Dunne as the doctor. While Weiss has some fun with Video Pirates (actual sea pirates stealing movies yet complaining about incompatible formats) and Murray in Videoland (Lou Jacoby gets stuck inside his television set and transported to several shows and even a music video by Huey Lewis and the News), but the titular segment Amazon on the Moon often falls flat. The movie would go through various shuffling of segments while languishing in post production for over a year, until Universal eventually decided to dump it in theaters on September 18, 1987, virtually ignored my movie-goers, yet finding a cult audience on home video and cable over the years.

Amazon Women on the Moon is a movie that, for many of its segments, was never intended to look good. So it is surprising just how good the 1080p AVC-encoded transfer supplied by Universal to Kino actually is. Aspect ratios alternate between 1.85:1 and a window-boxed 1.37:1 depending on the content being spoofed. Any abnormalities in the image, such as color tones, dirt, splices, and scratches are all intentionally baked into the source material, as this is supposed to spoof late-night television viewing from the mid 1980s, back when local stations still received filmed sitcoms and movies on beat up 16mm prints. The transfer is pretty much what it supposed to be, and does so quite well.

Amazon Women on the Moon was released theatrically with a mono optical soundtrack, and Kino has encoded that mono track in a nice DTS-HD MA 2.0 mono track. Like the video, any abnormalities in the soundtrack are intentional, such as pops, hiss, etc. That being said, dialogue remains clear and understandable when it is supposed to be.

Audio Commentary with Film Historians Kat Ellinger and Mike McPadden: The two commentators are huge fans of this film, often gushing at how much they like each particular segment but also discuss how the segments fall into each director’s filmography.

Bullshit or Not? The True Story of “Amazon Women on the Moon (1080p; 24:16): John Landis, Joe Dante, Belinda Balaski, editor Marshall Harvey, and other members reminisce about the making of the film. Joe Dante has one of the funniest lines early on about having a nightmare about making a movie that no one saw and that being Amazon Women on the Moon.

Deleted Scenes (1080p; 19:18): Segments and assorted deleted scenes cut from the theatrical version, although many were restored in the broadcast television version.

Trailers: Amazon Women on the Moon, I’m Gonna Get You Sucka, Mafia!, and Oscar.

Amazon Women on the Moon is very uneven in its comedy, but fans will be happy to finally have a special edition of this cult favorite.

Video Pirates and Bullshit or Not are my favorites.

black guy with no rhythm. that's mine! love this movie.

Seeing Carrie there reminds me of Under the Rainbow. What are the chances? in fact, that one and The Pirate Movie.
Last edited: Dec 11, 2020
You must log in or register to reply here. 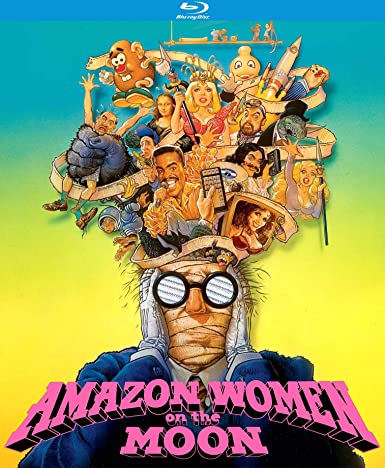