Alvin and his chipmunk brothers return for a fourth feature film in Walt Becker’s Alvin and the Chipmunks: The Road Chip. If you’ve seen any of the previous three installments in this popular series, you know just what you’re going to get with this newest one: typical Chipmunk pandemonium and wall-to-wall music.

Alvin and his chipmunk brothers return for a fourth feature film in Walt Becker’s Alvin and the Chipmunks: The Road Chip. If you’ve seen any of the previous three installments in this popular series, you know just what you’re going to get with this newest one: typical Chipmunk pandemonium and wall-to-wall music. No fewer than eleven musical segments dot the ninety minutes of the movie’s running time leaving not much time for story, and that’s good since there isn’t much of one. Some fine actors cope with the animated rodents as best they can (and assorted cameo personalities pop up as well), but this newest effort is no better or worse than any of them have been.

Dave Seville (Jason Lee) is dating a pretty young doctor Samantha (Kimberly Williams-Paisley) and things appear to be getting serious. He’s heading to Miami to be with his musical act Ashley Grey (Bella Thorne) at the launch of her new album, and he offers his plus-one ticket to Samantha leaving the boys (voiced by Justin Long, Matthew Gray Gubler, and Jesse McCartney) at home with the doctor’s jerk wad teenaged son Miles (Josh Green). The boys don’t like one another at all, but when it appears Dave intends on proposing to Samantha in Miami, they band together to try to stop it from happening. Miles tries to sneak the chipmunks onto a flight to Miami, but they cause their usual mayhem earning the ire of Air Marshal Suggs (Tony Hale) who slaps the chipmunks on the No-Fly list. They’re then stuck trying to get to Miami from Texas on a road trip for the ages with a stop off in New Orleans while Suggs pursues them doggedly.

The Randi Mayem Singer-Adam Sztykiel screenplay takes the usual feeble dramatic shortcuts: neither Dave nor Samantha seems to be observant enough to see how Miles is mistreating and tormenting the Chipmunks in the early going, and the Chipmunks could have avoided all the problems with but one word to Dave to allay their fears about being abandoned. Naturally, during their travails on the road, Miles and the ‘Munks do bond and decide if their “parents” do indeed get hitched, it wouldn’t be such a bad thing, but it takes the entire movie for them to come to that realization. Along the way, there are production numbers in a Texas road house, in New Orleans during a jazz street parade, and in Miami at the climax and enough fart, belch, pee, and poop jokes to tickle the youngest kid’s fancy. Director Walt Becker keeps things like the usual slapstick bedlam moving along even with the constant musical interludes and can be partially forgiven for allowing actor Tony Hale to indulge in the most flagrant overacting as the cartoonishly malevolent air marshal. The Chipettes (voiced by Christina Applegate, Kaley Cuoco, and Anna Faris) get jammed into the story once again to no real purpose (they’re pulled from acting as judges for American Idol to take part in the finale), but there are heartwarming moments built into the story, too, so that the whole thing is not just havoc from beginning to end though it pretty much does start and end that way so Dave can scream his iconic, “ALVIN!!!”

As always, though Jason Lee is the top-billed star of the film, the CG Chipmunks are the real draw of the movie, and time has allowed the special effects to become sophisticated enough to make these creations fit so smoothly into the real world that one if he’s sufficiently young enough and innocent enough could almost believe in their existence. Even electronically tinkered with, Matthew Gray Gubler’s voice cadences are pretty unmistakable as the intelligent Simon, and Justin Long as the mischievous Alvin and Jesse McCartney as the portly Theodore do fine, too. Josh Green displays some character growth as the thoughtless Miles develops some feelings during the film. Kimberly Williams-Paisley’s Samantha isn’t very distinctive and neither is Bella Thorne’s Ashley Grey, but they serve their purposes as romantic interests for the two star males in the cast. Tony Hale’s overdone cop is fun for a while though his pursuit eventually wears out its welcome. Jennifer Coolidge and John Waters pop up in brief bits (in Waters’ case, there’s a rather clever rejoinder concerning Pink Flamingos that will fly over most tykes’ heads).

The film is presented in its theatrical 1.85:1 aspect ratio and is anamorphically enhanced for widescreen televisions. Sharpness isn’t consistently solid with more than a few instances where image quality is soft and undynamic. Color is rich, though, and while skin tones sometimes look pasty and unrealistic, at its best the color is controlled and effective. Contrast has been well maintained throughout while black levels are suitably dark when the need arises. Even with the anamorphic enhancement, there are moiré patterns to be glimpsed on occasion. The movie has been divided into 24 chapters.

The Dolby Digital 5.1 sound mix makes the wall-to-wall music interludes be the most active part of the surround design. Mark Mothersbaugh’s background score takes more than few borrowings from famous movies of the past (Psycho, The Good, the Bad, and the Ugly, for two examples), and the pop tunes (despite the renditions by the Chipmunks) will be familiar to those who have been faithful radio listeners for the past twenty years. Dialogue comes across nicely even in the Chipmunks’ elevated vocal registers, and atmospheric effects are used sparingly but with professionalism.

Alvin and the Chipmunks: The Story So Far (4:57): brief film montage summaries of the events from the first three films in the series.

Ultimate Playlist: Music Machine (19:50): the eleven musical interludes in the film presented in montage. They are also accessible individually.

Bound for Georgia (2:16): a behind-the-scenes look at how most of the movie was shot in Georgia with sound bites from director Walt Becker, producer John Starke, and stars Jason Lee, Tony Hale, and Kimberly Williams-Paisley.

Road Chippin’ Through Georgia (5:02): another behind-the-scenes look at the various Georgia locales used for major sequences in the movie. This repeats some of the sound bites and footage from the previous vignette featuring the same array of on-camera speakers.

Alvin and the Chipmunks: The Road Chip is certainly a known quantity: it’s as rambunctious and silly as the previous three installments of the series have been. If this new 21st century incarnation of the act is your cup of tea, The Road Chip will suit your needs admirably. Otherwise, steer clear. 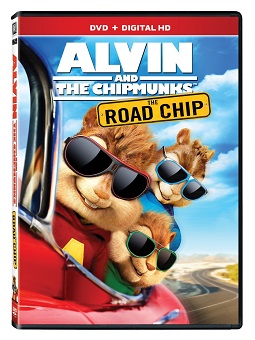